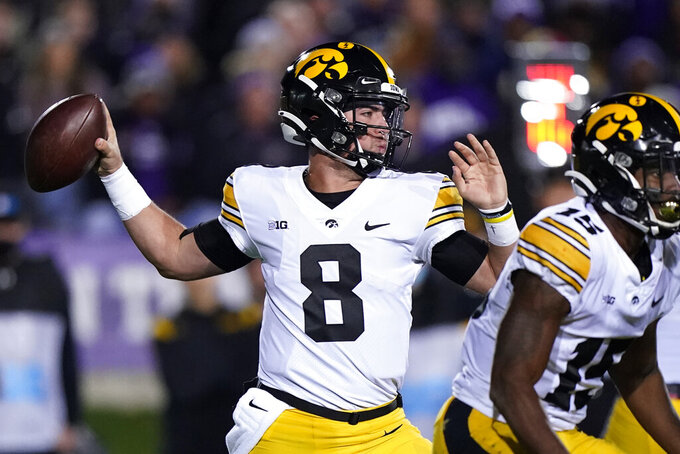 Line: Iowa by 4 1/2, according to FanDuel Sportsbook.

This is the week the Big Ten West race begins to get unjumbled. Right now there's a four-way tie for first. The winner of this game will be tied for or alone in first place; the loser falls a full game behind with two to play. It also is a trophy game, with the teams playing for Floyd of Rosedale. Iowa has won the bronze pig six straight years and eight of the last nine.

Minnesota QB Tanner Morgan vs. Iowa defense. Morgan has been up and down and must bring his ‘A’ game if the Gophers are to win. He's completed only 51.5% of his passes with one touchdown and four interceptions in the Gophers' three losses. The Hawkeyes intercepted three passes against Northwestern to run their nation-best total to 19 and are allowing fewer than 16 points per game.

Minnesota: LB Mariano Sori-Marin has had two straight double-digit tackle games and is the top playmaker for a defense tasked with holding down Iowa's run game and putting pressure on what probably will be a new starting quarterback.

Iowa: QB Alex Padilla is expected to make his first start in place of the banged-up and underperforming Spencer Petras. Padilla entered last week's 17-12 win over Northwestern on Iowa's fourth possession and completed 18 of 28 passes for 172 yards.

Iowa has not trailed in a game against the Gophers since the fourth quarter in 2016, a span of 245 minutes and 28 seconds. ... The Hawkeyes are 20-5 in their last 25 trophy games (Iowa State, Minnesota, Nebraska, Wisconsin). ... Tyler Goodson has been Iowa's leading rusher in 12 straight games. The last Iowa player to lead the team in rushing in 13 consecutive games was Shonn Greene (2008). ... Minnesota offensive lineman Conner Olson will make his 55th career start, tying the Big Ten record set by Ohio State’s Billy Price (2014-17). ... Gophers WR Chris Autman-Bell is expected to play. He left last week's game after taking a big hit in the third quarter. Autman-Bell leads the Gophers with 24 catches for 300 yards and two touchdowns.