No. 2 Georgia, No. 18 Auburn meet in long-running rivalry 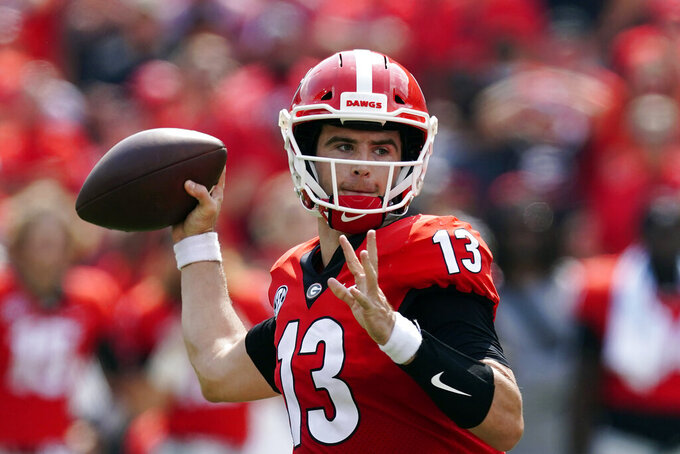 No. 2 Georgia (5-0, 3-0 SEC) visits No. 18 Auburn (4-1, 1-0) in the Deep South's Oldest Rivalry. The Bulldogs have been dominant defensively heading into a game normally played in November. Auburn is coming off its biggest win of the season and first victory at LSU since 1999. This is the 126th meeting, trailing only Wisconsin-Minnesota's 130 games coming into the season among FBS rivalries. It's unclear who will be the Bulldogs' starting quarterback with JT Daniels nursing a right lat injury. But the nation's top defense, and Stetson Bennett's experience, have made that uncertainty much less worrisome. The Bulldogs only passed for 72 yards and still beat then-No. 8 Arkansas 37-0. Georgia has won 16 of the last 20 meetings with Auburn and is favored by 16.5 points, according to FanDuel Sportsbook.

No. 17 Mississippi's offense against No. 13 Arkansas's defense. The Rebels didn't really get it going against Alabama, but they're still third nationally in yards per game at 549.2. The Razorbacks rank ninth in total yards allowed (280.9 a game). But the intriguing matchup goes beyond that. Both teams are coming off lopsided defeats after terrific starts, but they fell to the nation's two top teams. Arkansas was shut out by Georgia and Ole Miss fell to No. 1 Alabama 42-21. They're each trying to restate their case as top-tier SEC teams. Arkansas is seeking its first 5-1 start since the 2011 season.

Texas A&M versus Alabama appeared destined to be one of the biggest matchups in determining the SEC West. Then the Aggies dropped back-to-back games against Arkansas and Mississippi State and are 17.5-point underdogs, according to FanDuel Sportsbook. The top-ranked Crimson Tide have won the last eight meetings. But the Aggies do have the nation's No. 5 scoring defense, giving up just 12.5 points per game. Alabama is averaging 45.6 points on offense, third nationally.

Alabama, Arkansas, Georgia and Stanford are the only teams with multiple wins over top-15 opponents this year. ... Kentucky hosts LSU seeking its first 6-0 start since 1950, having only done it before that in 1898, 1903 and 1910. ... Tennessee's 458 rushing yards against Missouri was the program's record in a road game and the most overall since running for 513 against Washington & Lee on Nov. 10, 1951. ... Homefield advantage hasn't always been so helpful in the Auburn-Georgia series. The Bulldogs are 17-12-2 on the Plains while Auburn has an 18-16 edge in Athens. ... Thanks to QB Matt Corral, the Rebels are one of only five teams nationally who have yet to throw an interception. ... John Samuel Shenker became the first Auburn tight end to have a 100-yard game since Andy Fuller in 1994, gaining 102 against LSU.

No. 16 Kentucky's star RB Chris Rodriguez Jr. is leading the SEC and ranks fifth nationally with 621 rushing yards. He's averaging 6.0 yards per carry and has four touchdowns entering the game with LSU. That includes a 19-carry, 99-yard, one-TD performance in the win over No. 20 Florida. Rodriguez needs just 18 yards to become the 10th Kentucky player with 2,000 career yards on the ground.