No. 25 Spartans out to prove this season is different 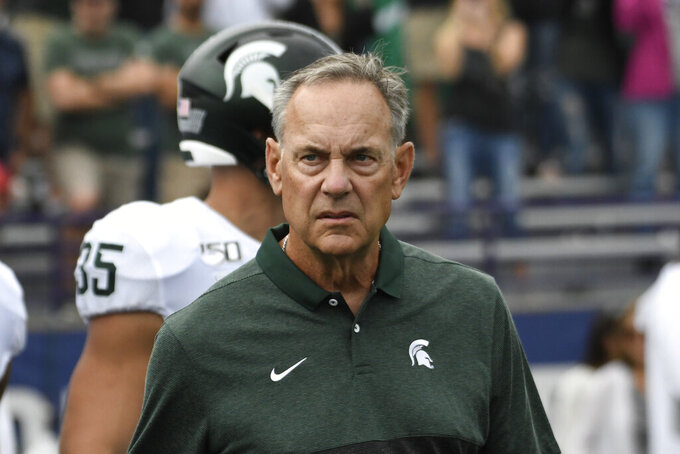 Those are two notable differences between this season and last, but four games in, the 25th-ranked Spartans are right where they were a year ago: 3-1 with a tough loss to Arizona State in the rearview but a 1-0 Big Ten mark.

Dantonio again has an uneven offense, a dominant defense and lots of potential statement games ahead.

But while the Spartans tripped at home against Northwestern last season in their fifth game, Dantonio said Tuesday that Saturday's homecoming game against Indiana (3-1, 0-1) is a chance to prove they're a different team than last season's 7-6 squad.

"Our seniors and our leaders on our football team, they have done a tremendous job in terms of setting the tone and setting the chemistry," Dantonio said.

The same could be said for the veteran coach, who passed Duffy Daugherty for the school's all-time lead with his 110th win, beating Northwestern 31-10 on Saturday.

"It brings everybody together who is a part of this program and hopefully everybody has a little bit of a moment to sort of take in with that," Dantonio said. "I appreciate that very much, but they are also excited for them."

Seybert is among the ones with reason to be excited this week.

The senior, who transferred from Buffalo and has undergone two position shifts in East Lansing, was granted a scholarship for the spring semester.

Then, after scoring his first two career touchdowns on Saturday in relief of injured starter Matt Dotson, the coach put Seybert back on scholarship for the rest of the year.

Seybert said Dantonio announced the scholarship offer to the team almost as a side note in wake of the victory, which put the Spartans back on track after the home loss to Arizona State.

The tight end said he was always proud to be on a Big Ten team, even though the decision to move up to the Power 5 from the Mid-American Conference looked at times like it might not result in substantial playing time.

That changed on Saturday, as the tight end caught an 8-yard touchdown in the third quarter and a 7-yard score in the fourth.

"I had down days where it's like, 'Dang, man, I don't know if it's going to work, I don't know if this decision was worth it,'" Seybert said. "You just can't give up, never quit. When you're down and out, you just got to focus on getting better."

Seybert, who played defensive end last season but only saw the field on special teams, said he was not honest with himself his first couple years in East Lansing. Since then, he worked on his weaknesses and improved.

"He's probably the most improved player I've seen since I've been here, besides Kenny (Willekes) of course," senior quarterback Brian Lewerke said, noting the qualifier of the All-American candidate at defensive end. "(Seybert) has been incredible and he worked so hard. I'm very happy for him that he's been able to make plays on the field."

Seybert, an in-state player from Traverse City, could be a nice shot in the arm for an offense still searching for consistency.

The Spartans have alternated each week between dud and juggernaut, scoring 14 points combined in their first and third games and 82 in their second and fourth.

Meanwhile, the defense has been characteristically stout, sitting third nationally in rushing yards allowed at 52.2 per game. Dantonio's team has held opponents under 30 points in 16 consecutive games, the third-longest active streak in the FBS.

"We always can improve," senior tackle Raequan Williams said. "Northwestern had some good runs on film.

"The box score looks good, but on film, there's always a few plays you can get better on."