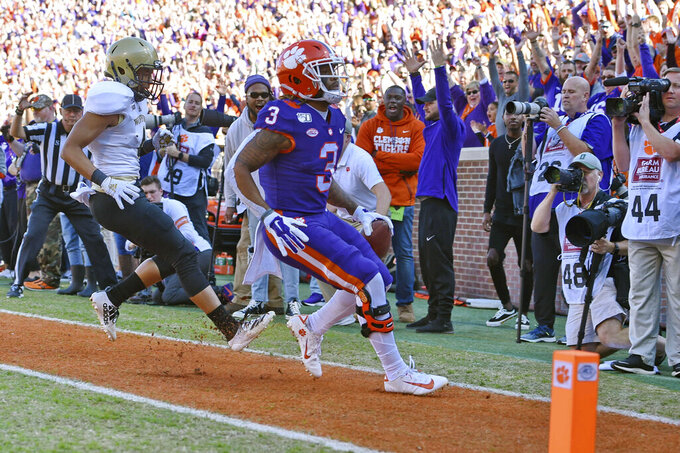 Clemson's Amari Rodgers (3) scores a touchdown while defended by Wofford's Keyvaun Cobb during the first half of an NCAA college football game, Saturday, Nov. 2, 2019, in Clemson, S.C. (AP Photo/Richard Shiro)

Lawrence accounted for four touchdowns, Travis Etienne ran for 212 yards in a record-setting performance and No. 4 Clemson rolled to its 24th straight victory, 59-14 over FCS opponent Wofford on Saturday.

Lawrence had three TD passes for a fourth straight game, leading the Tigers to a season-high 702 yards. And Swinney things people should start focusing on that instead of finding fault in Lawrence's play.

Lawrence, the 6-foot-6 long-haired sophomore, gets plenty of forgiveness from his team Tiger fans. He heard outsiders pick at his career-high eight interceptions — double what he threw during Clemson's 15-0 national championship season a year ago — and he shrugs it off as the Tigers (9-0) keep winning.

Etienne, the reigning Atlantic Coast Conference player of the year, helped the Tigers put it away early with scoring runs of 47 and 86 yards in the first 15:12. Clemson improved to 34-0 against FCS programs. It was the Tigers' sixth straight win over Wofford (5-3), which fell to 1-21 against FBS schools.

Lawrence had TD passes of 35 yards to Amari Rodgers, 22 yards to Tee Higgins and 34 yards to Justyn Ross. Lawrence also rushed for a 2-yard score that put Clemson up 42-0 at the half.

"For every bad play he's had, he's had 50 great ones," Swinney said. "He's been tremendous all year."

As have Clemson's defense, holding Wofford to 75 yards in the opening half.

The Terriers broke up the shutout with a 65-yard scoring drive that ended on Ryan Lovelace's 20-yard run. Wofford became the only team this year to score two TDs in one quarter against Clemson's defense, which came into the game ranked sixth nationally in points allowed at just 11 per game.

The highlights, though, were scarce for Wofford, which has lost its last 16 games to Power Five opponents.

"Our guys didn't blink," Wofford coach Josh Conklin said. "Our guys played four quarters as hard as they could. Sometimes the execution wasn't exactly where it needed to be. But that kind of goes hand in hand with a team like this."

Clemson has opened with nine straight wins for the fourth time in five seasons. It finished with a season-best 702 yards, the fourth time gaining 600 yards or more this year — a first in school history.

Wofford: The Terriers never had a chance against the highest-ranked FBS opponent they've ever played. Still, Wofford had won five straight on the season and is competing for a third consecutive Southern Conference title and fourth straight NCAA playoff appearance. The $360,000 the school received from Clemson will also help its athletic department bottom line.

Clemson: The Tigers have not been pressed the past month, winning their last four games by a combined score of 208-45. Lawrence and Etienne have powered the offense in that stretch after Clemson's early-season scare — a 21-20 victory at North Carolina on Sept. 28. And while the Tigers' scheduled has taken some hits from critics, there's little doubt the defending national champions will be among the top four team when the first College Football Playoff rankings are released Tuesday.

Clemson held out starting defensive end Xavier Thomas and offensive lineman John Simpson due to injuries. Both would've been available to play if needed, Swinney said. But the Tigers didn't need them.

Clemson receiver Tee Higgins wasn't sure who Travis Etienne was, but he was sure he wasn't on scholarship. "I thought he was a walk-on," Higgins joked.

Etienne reached 200 yards by halftime, the first ACC runner to accomplish that in 15 years.

Higgins said Etienne wore braces when he arrived two years ago and always had a goofy smile on his face that didn't look like any top-flight football player he'd seen in the past. These days, Higgins is happy to have Etienne as a Tiger.

Wofford returns to FCS competition at Mercer on Saturday.