No. 5 Georgia visits No. 13 Auburn to highlight SEC slate 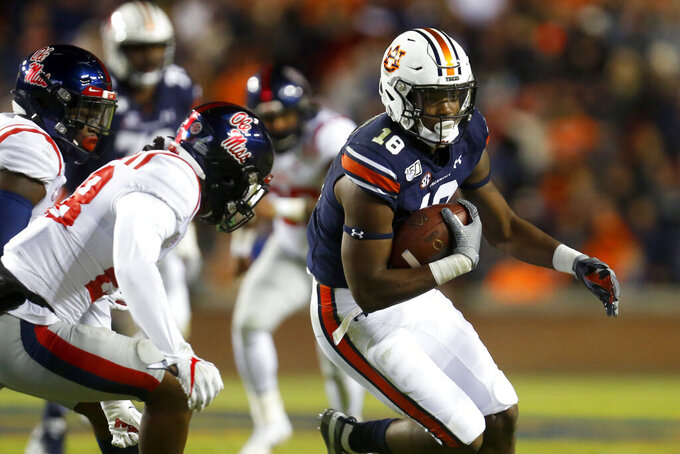 Auburn wide receiver Seth Williams (18) carries the ball as Mississippi defensive back Jay Stanley (28) defends during the second half of an NCAA college football game Saturday, Nov. 2, 2019, in Auburn, Ala. (AP Photo/Butch Dill)

Here are some things to watch during the 12th week of the Southeastern Conference football season.

No. 5 Georgia (8-1, 5-1 SEC, No. 4 College Football Playoff) at No. 13 Auburn (7-2, 4-2, No. 12 CFP): Georgia probably must win this game to keep its playoff hopes alive. The Bulldogs have won three straight and have shut out two of their last three opponents. They’ve given up a total of 17 points during their three-game winning streak. Georgia has won 14 of its last 18 matchups with Auburn. Although Auburn has the home-field advantage, that generally doesn’t mean much in this series. Georgia owns a 16-12-2 record at Auburn, while Auburn has gone 18-15 in Athens (this game also has been played in Atlanta and Columbus, Georgia).

Mississippi State running back Kylin Hill vs. Alabama run defense: Hill is the SEC’s leading rusher and had run for 1,027 yards and nine touchdowns while averaging 5.8 yards per carry. Mississippi State’s had two weeks to prepare for this game after rushing for 460 yards in a 54-24 blowout of Arkansas. Hill rushed for 234 yards in that game. Hill faces a much tougher test Saturday as No. 4 Alabama (No. 5 CFP) looks to make a statement and keep its playoff hopes afloat after a 46-41 loss to No. 1 LSU. Alabama is giving up 3.7 yards per carry.

The SEC has a 34-13 nonconference record. The league is on pace for its worst nonconference regular-season winning percentage (.723) since 2004 (.694) and already has its highest number of regular-season nonconference losses since 2003. ... Georgia still hasn’t allowed a touchdown run. The only SEC teams to go an entire season without allowing a rushing touchdown are Tennessee in 1939 and Mississippi in 1963. ... Alabama heads into Mississippi State trying to avoid its first two-game losing streak since 2013. The Crimson Tide closed the 2013 season by losing to Auburn and to Oklahoma in the Sugar Bowl. ... Florida’s Kyle Trask threw for 363 yards in a 56-0 rout of Vanderbilt last week, which marked the highest total for a Gator since Tim Tebow closed the 2009 season and capped his college career by passing for 482 yards against Cincinnati in the Sugar Bowl. ... Arkansas went 2-4 against Group of Five programs during the brief coaching tenure of Chad Morris, who was fired Sunday. That included losses to Colorado State, North Texas, San Jose State and Western Kentucky. ... Kentucky’s Lynn Bowden Jr. is the only Football Bowl Subdivision player leading his team in both yards rushing (712) and yards receiving (348).

There doesn’t seem to be an obvious upset pick on the SEC schedule this week, but Missouri’s success on its home field this year could give No. 11 Florida (8-2, 5-2, No. 11 CFP) some cause for concern. Missouri (5-4, 2-3) has lost three straight games but is unbeaten at home this year. Florida heads into Columbia as a seven-point favorite. An unranked Missouri team beat a 13th-ranked Florida team 38-17 in Gainesville last year. While Missouri’s recent struggles make a second straight upset in this series seem unlikely, perhaps the Tigers’ home-field advantage will make a difference.