Oklahoma QB Hurts cramming for only year with Sooners 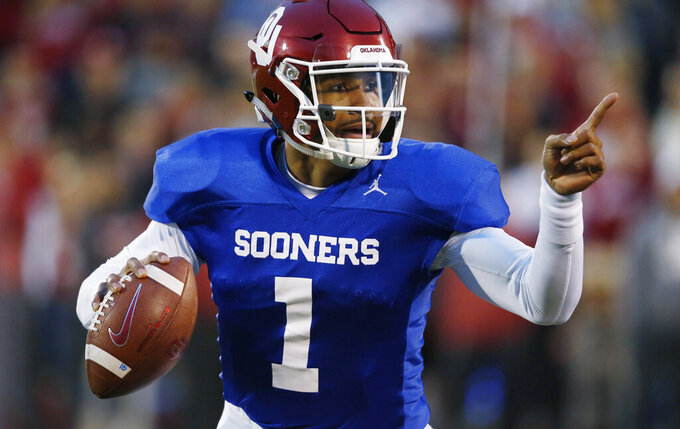 NORMAN, Okla. (AP) — Jalen Hurts has had all the answers since transferring from Alabama in January.

One question had the new Oklahoma quarterback stumped. When asked what he does besides football and studying, he paused.

Football and studying, that pretty much it?

Hurts finally said he calls his friends and writes his thoughts down. But there isn't a lot of free time when you are trying to master coach Lincoln Riley's dynamic offense.

"My deal is taking in as much as I can so I can be the best player, the best leader I can be for this team this year," Hurts said.

It's clear that Hurts is focused, and he has much to show for that approach — he has played in three national title games and led a stirring rally against Georgia last season in the SEC championship game. He was part of the Alabama team that won the 2017 national title.

Hurts lost his starting job to Tua Tagovailoa last season, but his numbers jump out nonetheless: He was 26-2 as a starter for Alabama, then completed 73% of his passes as a reserve last season.

"The man can ball," top returning receiver CeeDee Lamb said. "He's a great leader. He likes things done in his way, He's been where we're trying to go and he's won an actual national championship, so we're going to listen to what he has to say and we're going to take it on there."

Credentials alone don't account for the respect Hurts has earned. He immediately got his new teammates' attention with his work ethic heading into his final year of college football.

"He's a leader, no doubt," receiver Lee Morris said. "He was a leader from day one when he got here."

Hurts' demeanor is ideal for someone who is stepping in and following Heisman Trophy-winning quarterbacks Baker Mayfield and Kyler Murray. Expectations are high for the Big 12 Preseason Newcomer of the Year.

"I've had the same approach since I got here — to be the best quarterback I can be," he said. "All that other stuff is what y'all want to talk about."

Hurts is 21 and has already graduated from Alabama with a degree in communications. Running back Trey Sermon said Hurts' maturity stands out.

"He's an old head to me," Sermon said. "He listens to a lot of old-school music. He makes a lot of jokes that you hear that my uncle would say."

Mayfield was a fiery, vocal leader who would yell and jump around. Murray was more subdued, but had a swagger that his teammates latched onto.

"He's kept to himself, but he's still always working," Lamb said. "He's always either with film or he's trying to go get some routes in. He's definitely the most laid back guy on the team, if not top five."

Hurts feels his personality meshes well with Riley's, and he likes being paired with an aggressive, offensive-minded coach.

Hurts sees Riley as a players' coach and said Riley has made a special effort to build a connection with him.

"Our relationship has really grown," Hurts said. "You kind of have to force it because of the short time I'm here and how much I really need to take in before we actually get into gameplay. It's a relationship I definitely appreciate. Definitely a different relationship from coaches I've had in the past. I think the relationship can take us a long way. I think it can take this team a long way."

Riley said Hurts' ability to connect with those around him will be the most important part of the transition.

"To me, the story's not so much trying to get him caught up learning the offense," Riley said. "It's more trying to build the relationships and the trust that a lot of times it takes years and years — that to me is the whole deal, and to me, if that can be developed at a high level, the scheme stuff will come."