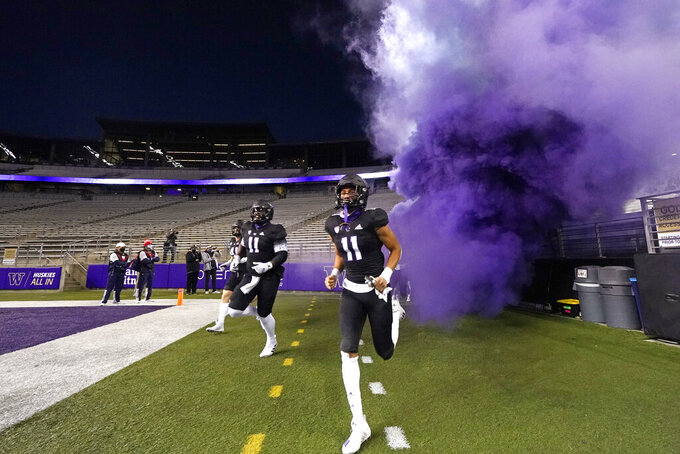 Washington players run from a purple cloud onto the field before an NCAA college football game against Arizona, in a stadium empty of spectators Saturday, Nov. 21, 2020, in Seattle. (AP Photo/Elaine Thompson)

The Thanksgiving weekend is normally devoted to end-of-season rivalry games in the Pac-12 but — like everything else — it's different this year.

As of Wednesday, it appeared the Big Game between Cal and Stanford was going to go on as planned Friday. The rivalry game between Oregon and Oregon State, formerly known as the Civil War, was also still set for Friday.

But the Apple Cup between Washington and Washington State was canceled. The Huskies scrambled to schedule a game with Utah for Saturday night — made possible because the Utes' Sunday meeting against Arizona State was also canceled.

Keeping up? There are also two nonrivalry games set for this weekend, Colorado at USC and Arizona at UCLA, both scheduled for Saturday.

And, let's not forget, Thanksgiving weekend does not denote the end of the regular season this year. The Pac-12 will still be playing well into December.

It's all a jumble. So here's a look at the current status of the rivalry games from around the Pac-12:

The 124th edition of the rivalry is on so far but there's a big change this season in that the game is no longer called the Civil War. The two teams mutually decided over the summer to drop the nickname after a campaign by former Ducks quarterback Dennis Dixon, out of concerns that “Civil War” represents a connection to a war fought to perpetuate slavery.

“While not intended as reference to the actual Civil War, OSU sports competition should not provide any misconstrued reference to this divisive episode in American history,” Oregon State President Ed Ray said in a statement when the change was made official.

As for the game itself, Beavers coach Jonathan Smith was just thankful for the opportunity to play in an odd season. The No. 9 Ducks are undefeated in three games and Oregon State (1-2) is coming off a morale-boosting victory over Cal.

“We’d love to have Beaver Nation out here on Saturday. At the same time, I feel grateful that we’re able to play this game in 2020," Smith said. "All of us get that it’s really different, but I’m grateful we get to play them.”

The Apple Cup was called off because Washington State did not have the minimum number (53) of scholarship players available for the game. It is the second straight game the Cougars have been unable to play.

Washington State athletic director Pat Chun said the Apple Cup “is one of the most sacred rivalries in all of sports and one of the most meaningful days of the year for all Washingtonians. It’s gut-wrenching and disappointing for our student-athletes and coaches as well as those at UW."

Chun said he remained hopeful the game could be scheduled at a later date, perhaps the final day of the regular season.

There had been talk the Huskies might try to schedule undefeated BYU this weekend because the Pac-12 amended its rules to allow teams to schedule out-of-conference opponents. But the game was never likely to happen because BYU would have had to comply with the conference's more rigorous testing and tracing protocols, and travel to Seattle.

“I’m just so excited for our students, coaches and staff to have a chance to compete again this weekend. Like we’ve said, they have worked so hard to get to this point and we want to provide opportunities for them to be on the field,” Washington athletic director Jennifer Cohen said in a statement announcing the game. “We’ve had some great battles with Utah the last few years and I’m looking forward to welcoming them to Seattle this weekend.”

The 123rd Big Game appears to be a go for Strawberry Canyon on Friday. For the first time in its history, the rivalry will feature two winless teams, as both the Cardinal and the Golden Bears are 0-2. Cal, however, went into the game 0-10 in 1999 and 0-9 in 2001 — and lost both times.

“Certainly it's different just because of the unique nature of this season,” Cal coach Justin Wilcox said. “But it doesn't minimize the impact of the Big Game to our team, or fans. We know how much it means to us and everybody out there. We appreciate it for all that it is, regardless of the circumstances."

Because of the coronavirus, there won't be fans for this one.

No marching bands either. So there's no possibility of a reprise of 1982's famous five-laterals among Stanford's trombone section for a Cal victory.

The Territorial Cup is set for Friday, Dec. 11. The Sun Devils have played just once this season so far.

The so-called “Rumble in the Rockies” is also scheduled for Dec. 11.

The greater Los Angeles rivalry is set for Dec. 12 at the Rose Bowl.