Patterson's abrupt ending at TCU unimaginable not long ago 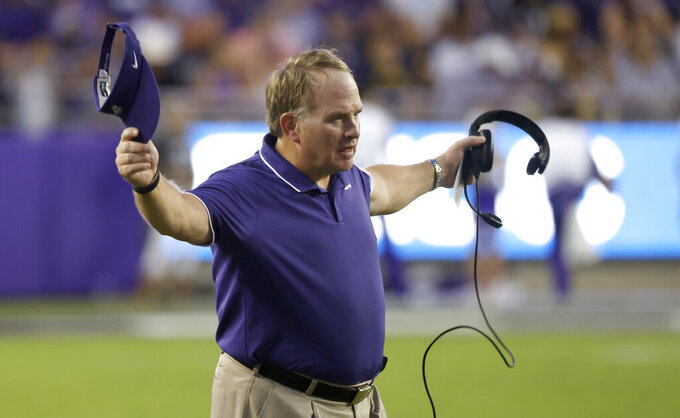 Not even TCU athletic director Jeremiah Donati envisioned such an abrupt ending to Gary Patterson's more than two decades as head coach of the Horned Frogs.

“Frankly, it’s a place that it was almost kind of unimaginable not too long ago,” Donati said Tuesday, two days after the school and Patterson agreed to immediately part ways.

In the end, the Horned Frogs (3-5, 1-4 Big 12) were no longer reaching the high expectations that had become common under Patterson.

TCU won or shared titles in three different conferences under Patterson, and had an undefeated season with a Rose Bowl victory even before a move to the Big 12 a decade ago that made them a Power Five team. There were 11 seasons with at least 10 wins overall, and top-10 finishes in the AP Top 25 poll six times over a 10-season period through 2017.

“This is not what we envisioned at all, and certainly not what we wanted, and not what Gary wanted,” Donati said on the TCU campus. “We have very high expectations for this program, and that’s because of Gary. You know, that’s the irony of it, is that he’s built this program. And so we weren’t meeting those expectations, and he would acknowledge that as well.”

The Frogs have lost five of their last six games, including the last three by at least 12 points. They are coming off a 31-12 loss at Kansas State, which is Patterson's alma mater.

Former Minnesota coach Jerry Kill, who was the best man in Patterson's wedding and on his staff in an off-field role as a special assistant overseeing the offense, will be the interim coach the remainder of the season. The Horned Frogs host 14th-ranked Baylor on Saturday, then go to No. 11 Oklahoma State.

Donati said candidates are already being vetted in a national search to replace the coach he referred to as “a TCU icon.” Patterson's 181 victories were the most for an active coach at his current school, and he was the second-longest tenured FBS coach behind Iowa's Kirk Ferentz, who is in his 23rd season.

When TCU officials decided it was time for a change, they met Sunday with Patterson, who was offered the opportunity to finish his 21st season and then work in a different capacity in the athletic department. When the coach declined, they reached an agreement to release him from his contract that went through the 2024 season.

Patterson hasn't commented publicly, but the agreement would allow him to pursue other openings and coach again.

“He certainly could,” Donati said. “He's a young 61 and I wouldn’t put anything past coach Patterson to coach again, college, pro. I know he has a lot of other interests too. And so, you know, I hope he takes some time to think about what he wants to do because he’s got a lot to offer the game of football. And I don’t think that, you know, that it’s over necessarily.”

Since the end of an 11-3 season when the Frogs finished ninth in the AP poll, they are 21-22 overall and have struggled especially on defense this season. They are ranked eighth in the 10-team Big 12 in scoring defense (31.5 points per game), and ninth in total defense (443.3 yards per game) in what many at TCU anticipated being a bounce-back season.

Donati expects the coaching search to be done by the early December, or sooner, before the NCAA early signing period begins Dec. 15.

“You’ve really got to get a head start on what your coaching situation looks like before you get in there,” Donati said.

Without addressing potential candidates, Donati said TCU's search will start with someone who is currently a head coach, and one who understands the changing climate of college football as name, image and likeness, and the transfer portal.

“That's what the modern coach is going to have to be very adept at doing. Those are going to be important questions we ask," Donati said. “There’s a lot of strong interest, and I’m very confident we’re going to have an excellent coach here very soon.”