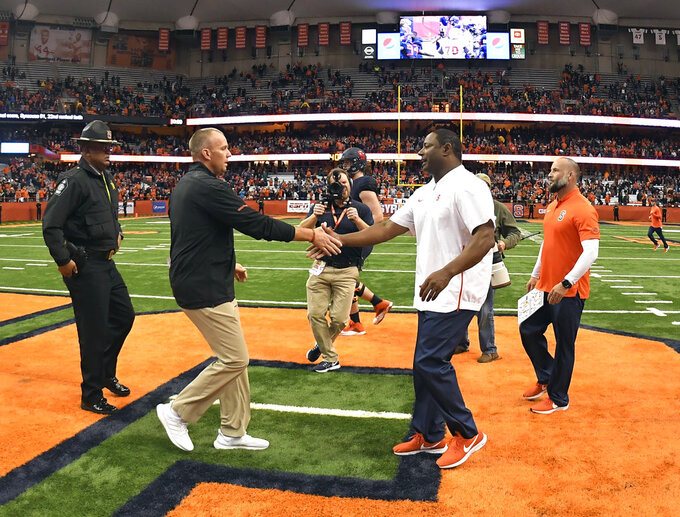 Syracuse quarterback Eric Dungey has never played in the final home game of a season. At long last he has that chance.

And rest assured that when the No. 13 Orange (7-2, 4-2 Atlantic Coast Conference, No. 13 CFP) take the Carrier Dome field on Friday night to face struggling Louisville (2-7, 0-6) the senior star will appreciate the moment.

"I think it's going to be an emotional night, definitely, with all that I've been through here," said Dungey, who missed the final three games of each of his first three seasons with injuries. "I'm just thankful for everything. It's going to be overwhelming with the emotions."

The home finale will be emotional for the senior class that helped third-year coach Dino Babers turn the team into a contender similar to the time Donovan McNabb was working his magic in the late 1990s. The Orange are 5-0 in the Carrier Dome this fall and are seeking just their fourth perfect season inside since the facility that opened in 1980.

"I really do hope the fans understand how emotional this game is," Babers said. "It's just one of those things that you're going to always remember. If they can put that in their hearts and minds, just come out to say goodbye to this senior class that has really put us back on the right road, given us an opportunity to change this program, I mean, my heart would go out to them. I think those young men deserve it."

It's the final road game of the year for Louisville and embattled coach Bobby Petrino, whose squad has lost six straight and is coming off a 77-16 beat-down at No. 2 Clemson . The Tigers racked up 661 yards offensively, 492 of it on the ground. Now the Cardinals face a team that's won three straight, is averaging 43 points a game, and is nationally on the rise.

"We haven't had a season like this before," Petrino said. "It's a challenge to everybody. It's difficult to prepare, go out and play hard, not win. It's hard on our players, hard on our coaches, hard on our families."

After Friday night, the Orange will play No. 3 Notre Dame at Yankee Stadium and No. 17 Boston College on the road, two more opportunities to keep rising and put those tough road losses to Clemson and Pittsburgh behind them.

"The sky's the limit to me. There's no telling what we can accomplish," senior linebacker Ryan Guthrie said. "There's always the what-if conversations, but we're looking forward. We've got a lot to look forward to."

Other things to know when Louisville visits Syracuse on Friday night:

"We're not taking Louisville lightly," Dungey said. "People are talking about, 'Oh, Louisville's not that great this year.' I don't think that's true at all. They've got a lot of great athletes, a lot of experience as well, and I think they're hungry for a win. We were that team once, where nobody respected us."

Babers is feting his seniors with a treat for the second year in a row. After the game, he will take the team into the locker room and five minutes later will bring the seniors back out to mingle with the fans one last time. Babers was hopeful senior DB Tyrone Perkins would make the trip. Perkins has been recovering in North Carolina from a serious leg injury suffered in last week's win at Wake Forest .

Louisville freshman Hassan Hall has shown flashes of potential at running back but clearly has carved a place returning kicks. He had a 93-yard touchdown at Clemson — the Cardinals' first in three years — and established a school record with 247 return yards and 273 all-purpose. He leads the team with 999 all-purpose yards.

Louisville sophomore WR Dez Fitzpatrick has 22 receptions for 290 yards and a pair of touchdowns in the past six games. That's a 13.2-yard average, and he's second on the team in receiving with 27 catches for 351 yards.

Syracuse's No. 13 ranking is its highest in the AP poll since the Orange were No. 11 on Sept. 28, 1998. That was McNabb's final season, and he went out in style in his last home game, rushing for three TDs and throwing for two more in a 66-13 triumph over Miami. McNabb and Dungey are the only QBs in school history to pass for over 8,000 yards and rush for more than 1,000.