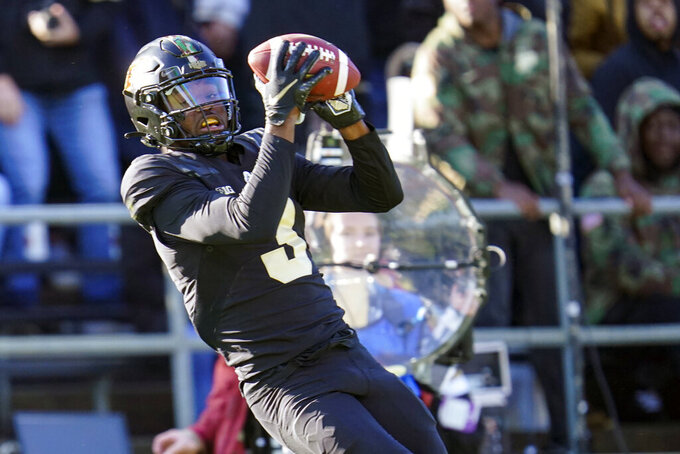 Purdue wide receiver David Bell (3) makes a catch for a touchdown against Michigan State during the first half of an NCAA college football game in West Lafayette, Ind., Saturday, Nov. 6, 2021. (AP Photo/Michael Conroy)

Line: Ohio State by 21 1/2, according to FanDuel Sportsbook.

The Buckeyes struggled and finally survived unranked and two-touchdown underdog Nebraska 26-17, one week after an underwhelming nine-point win over then-No. 20 Penn State. If Ohio State is ripe for an upset, this could be the week. Purdue is 6-3 and coming off a huge 40-29 upset of then-No. 5 Michigan State that left just four unbeaten teams in the new top 10. The last time the two teams met, Purdue stunned No. 2 Ohio State 49-20 in West Lafayette, Indiana, in 2018, a loss that would ultimately keep Urban Meyer's Buckeyes out of the College Football Playoffs.

Ohio State's defense against Purdue's passing game. The Boilermakers average of 332.6 yards passing per game is eighth-best in the country. Quarterback Aidan O’Connell has averaged 343 yards per game in the past five contests.

Purdue: WR David Bell's 1,003 yards leads the Big Ten and is sixth best in the FBS. In upsets of Iowa and Michigan State, Bell combined for 22 catches, 457 yards and two touchdowns. His five touchdowns lead the team.

Ohio State: WR Jaxon Smith Njigba has overshadowed better-known receivers Chris Olave and Garrett Wilson. Smith-Njigba had a career-high 15 catches for 240 yards and a touchdown last week and has racked up 888 for the season. He also leads the team in receptions (50) and receiving yards per game (98.7).

Ohio State has won seven straight since losing to Oregon on Sept. 11. ... The Buckeyes have won 24 consecutive Big Ten games, which is the longest streak in the conference since the Buckeyes’ national record, 30-game conference winning streak from 2013-15. ... Purdue has won three of its last four games and is tied with three schools – Wisconsin, Minnesota and Iowa – for the lead in the Big Ten West, all with 4-2 conference records. ... AP Top 25 voters kept Purdue out of the rankings this week but the Boilers landed at No. 19 in the College Football Playoff rankings. ... Purdue has beaten two top 5 teams this season, then-No. 2 Iowa and No. 5 Michigan State last week.