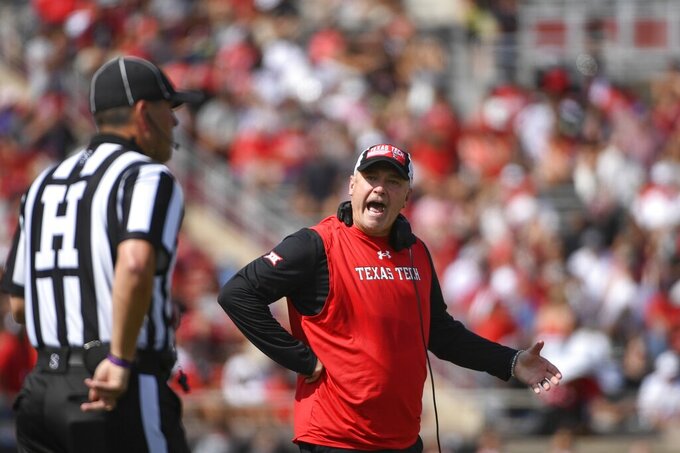 Texas Tech head coach Joey McGuire argues with the head linesman against Houston during the first half of an NCAA college football game Saturday, Sept. 10, 2022, in Houston. (AP Photo/Justin Rex)

The sophomore quarterback rescued the Red Raiders with his legs.

Smith ran 9 yards for a touchdown in the second overtime, lifting Texas Tech to a 33-30 victory over No. 25 Houston on Saturday.

A back-and-forth finish ended with the Red Raiders (2-0) beating a ranked nonconference opponent in the regular season for the first time since 1989, a span of 14 games.

It was the last meeting between the former Southwest Conference rivals before they become league foes again when the Cougars move from the American Athletic to the Big 12 next year.

After Houston’s Bubba Baxa opened the second OT with a 20-yard field goal, Smith broke into the open field and ran untouched to the end zone, sending Texas Tech students and fans streaming onto the field.

Smith answered with a 27-yard scramble on the next play, sparking a drive to a tying 47-yard field goal from Trey Wolff with three seconds to go. Wolff replaced Gino Garcia, who missed from 45 earlier in the fourth quarter.

“It’s always what coach (Joey) McGuire preached, you could look at this game and that’s exactly what he said, ‘What’s next?’” said Smith, who threw for 351 yards with three picks and six sacks that cut his rushing total from 86 to 28 yards.

“That’s something I did this game. Everyone on the sideline was encouraging and, ‘Hey, what’s next? We got this, we don’t got to worry about nothing.”

The Cougars (1-1) erased a 17-3 halftime deficit, getting even early in the fourth quarter when Jayce Rogers stepped in front of a pass from Smith and returned it 54 yards for a TD. Still, Houston’s 12-game regular-season winning streak ended.

Houston had 11 penalties for 121 yards, including two personal fouls on the same possession that twice let the Red Raiders keep the ball when the Cougars would have taken possession in the first half.

“Just a whole lot of stupid stuff,” coach Dana Holgorsen said. “Stupid, stupid, undisciplined stuff. I don’t feel like we deserved to win. With that said, I was very proud of our team in how we just kept fighting.”

Houston also trailed by two touchdowns in the second half of another overtime game in last week’s opener, rallying from 21-7 down entering the fourth quarter for a 37-35 double-overtime victory over UTSA.

“It was chaos,” Houston quarterback Clayton Tune said. “It felt a lot like last week, obviously other than the outcome. We’ve just got to be prepared to play till the clock says zero.”

Both teams scored touchdowns in the first overtime after backing themselves up. Smith converted on fourth-and-20 with a 21-yard completion to Jerand Bradley. The Red Raiders forced the second OT on Tahj Brooks’ 4-yard scoring run.

Tune faced second-and-21 to open overtime before a 19-yard completion to Nathaniel Dell, who had seven catches for 120 yards and a 35-yard punt return. Three plays later, he threw a 15-yard TD pass to Matthew Golden.

Houston: Before the Cougars made it two-for-two in overtime games this season, so did UTSA. The Roadrunners also rallied from a two-touchdown deficit in the second half Saturday, beating Army 41-38 in OT.

Texas Tech: Smith was up and down in his first full game since Tyler Shough again was sidelined by a shoulder injury in last week’s 63-10 victory over Murray State. The sophomore struggled at times in the first half before TD passes of 43 yards to Nehemiah Martinez and 54 yards to Myles Price gave Texas Tech its two-touchdown lead.

The Cougars slid a spot after last week’s victory over UTSA, and figure to fall out now. It’s unlikely Texas Tech will get many Top 25 votes, if any. But the Red Raiders play another ranked team next week in their first road game at N.C. State next Saturday.

Lead Houston running back Ta’Zhawn Henry exited early with an injury, and Brandon Campbell filled in with 80 yards and a touchdown. Brooks also had 80 yards and a score.

Houston: The home opener next Saturday is a second consecutive game against a future Big 12 opponent with Kansas visiting.

Texas Tech: If playing a ranked N.C. State team feels familiar for longtime Texas Tech fans, it’s because the last time a ranked nonconference opponent played in Lubbock before this win over Houston was Philip Rivers and the Wolfpack in 2002. N.C. State won 51-48 in overtime.