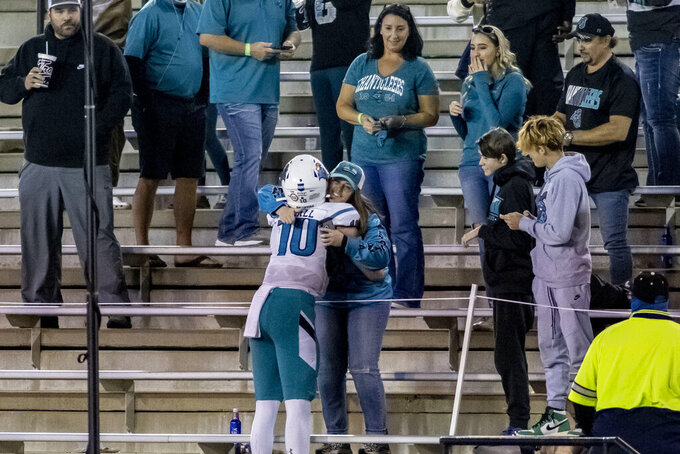 Coastal Carolina quarterback Grayson McCall (10) goes into the stands to give a fan a hug following a win over Troy at an NCAA college football game, Saturday, Dec. 12, 2020, in Troy, Ala. (AP Photo/Vasha Hunt)

The Sun Belt Conference football championship game Saturday between No. 9 Coastal Carolina and No. 17 Louisiana-Lafayette was canceled Thursday night because of a positive COVID-19 test within the Coastal Carolina program.

An entire position group would have been unavailable to play for the unbeaten Chanticleers because of contact tracing, the conference said.

“We are very disappointed that the championship game cannot be played, but we are so proud of all of the players and staff members and their hard work during this truly challenging season,” Sun Belt Commissioner Keith Gill said in a statement. “We will honor both teams as 2020 Sun Belt Conference Co-Champions.”

Both schools were in contention for a New Year’s Six bowl spot with a victory in the first Sun Belt title game featuring a matchup of ranked teams.

The upstart Chanticleers have been one of the stories of the season. Picked to finish last in the Sun Belt East Division, Coastal is the only 11-0 team in the country, including a victory at home two weeks ago against then-unbeaten BYU.

“We are all obviously devastated with this development and hurt for the student-athletes from both institutions in that they will not have a chance to compete for a conference title,” Coastal Carolina athletic director Matt Hogue said. “However, the adherence to health and safety protocols for our student-athletes has been and remains the first priority. Those protocols and guidance from our medical team fully governs this decision.”

Coastal played last weekend, rallying late to beat Troy in a game that had been postponed because of COVID-19 issues.

Chanticleers coach Jamey Chadwell complained after the BYU game that Coastal had to play Troy last week even though it had clinched its division, while Louisiana-Lafayette had an open date and extra week to prepare for the conference championship.

Louisiana-Lafayette has won the West Division of the Sun Belt the last three seasons, losing each of the first two conference title games to Appalachian State.

In a season when Power Five conference teams have played few games outside their leagues, Louisiana-Lafayette has maybe the most impressive nonconference victory: 31-14 at Iowa State in its opener. The eighth-ranked Cyclones are playing Oklahoma in the Big 12 championship game Saturday.

“We are severely disappointed for our student-athletes and staff to not have the opportunity to play in what would have been a truly exciting championship game for the Sun Belt Conference,” ULL AD Bryan Maggard said. “For our football program, fans and alumni, we look forward to learning of our bowl destination this weekend.”

In this strange season, where 11 bowls have already been canceled and almost a dozen Power Five teams have said they won't play in the postseason if offered, the Ragin' Cajuns and Chanticleers could consider playing their rematch in a bowl game.

The Sun Belt has spots available in the Cure Bowl in Orlando, Florida, and the Camellia Bowl in Montgomery, Alabama, but would need another conference to give up a spot.