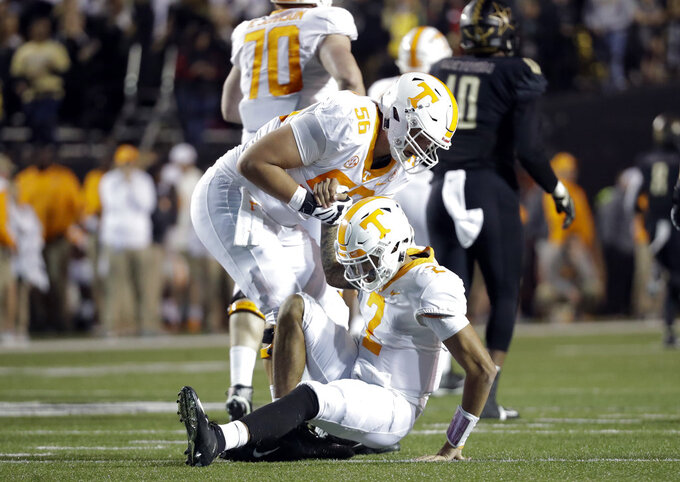 Tennessee quarterback Jarrett Guarantano (2) is helped up by offensive lineman Riley Locklear (56) after being knocked down in the second half of an NCAA college football game against Vanderbilt, Saturday, Nov. 24, 2018, in Nashville, Tenn. (AP Photo/Mark Humphrey) 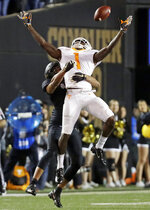 Perhaps the clearest evidence of Tennessee's fall over the last decade is how the Volunteers have lost their status as the premier program in their own state.

Tennessee (5-7) squandered an opportunity to earn a bowl bid in coach Jeremy Pruitt's first season by losing 38-13 at Vanderbilt in its regular-season finale. This marks the third straight year that Tennessee has lost to Vanderbilt, an in-state rival it has traditionally dominated.

While Vanderbilt (6-6) awaits its bowl destination and Memphis (8-4) and Middle Tennessee (8-4) prepare to play in conference championship games, the Volunteer State's flagship program is finished in November for a second straight season.

"Lord knows we've got a long ways to go," Pruitt said. "We've got to improve."

Tennessee has gone 2-5 against Vanderbilt over the last seven years after posting a 28-1 record against the Commodores from 1983-2011. The 38-13 result Saturday was Vanderbilt's most lopsided victory in this series since a 26-0 triumph in 1954.

The setback against Vanderbilt gave Tennessee its seventh losing season in the last 11 years. Pruitt is Tennessee's fifth head coach during that stretch.

That's a stunning fall for a program that won at least eight games every year from 1989-2004 and had at least 10 wins in eight of those seasons, including the 1998 national championship run.

Tennessee showed some signs of progress under Pruitt, who inherited a team that set a school record for losses last year during a 4-8 campaign in which it went winless in SEC competition.

The Vols won at Auburn when the Tigers were ranked 21st and posted a home victory over a Kentucky team that was ranked 11th at the time. But they also lost by at least 25 points six times.

After that victory over Kentucky put Tennessee one win away from bowl eligibility, the Vols closed the season with blowout losses to Missouri and Vanderbilt.

Defensive end Kyle Phillips noted that good teams sustain their level of play each week and acknowledged that the Vols "don't show up every Saturday."

"We definitely have a young team with some new faces trying to embrace the new culture that this coaching staff is trying to bring to us, and everybody wasn't bought in," Phillips said. "That's what happens when everybody's not bought in. That's when you get inconsistent play."

Johnson and Phillips join Shy Tuttle as departing senior starters on the defensive line, but that's one of the only areas in which Tennessee faces significant graduation losses.

Tennessee was the only Football Bowl Subdivision program that didn't have any seniors start a single game on offense this fall. That inexperience was evident as Tennessee ended the regular season ranked 122nd out of 130 FBS teams in yards per game (325.5). Rutgers is the only Power Five team ranked below Tennessee in that category.

On defense, the secondary had true freshmen Alontae Taylor and Bryce Thompson starting at cornerback for much of the season.

While Tennessee figures to return most of its key players from its 2018 team, the Vols still must add much more talent to get on equal footing with most SEC teams. Pruitt used his postgame news conference Saturday to make a pitch to potential recruits.

"We've got to recruit some depth to where we get competition," Pruitt said. "When we do that, we'll get better in a hurry. I think if a young man wants an opportunity to have a chance to play in the SEC really early, this would be a good place to start."