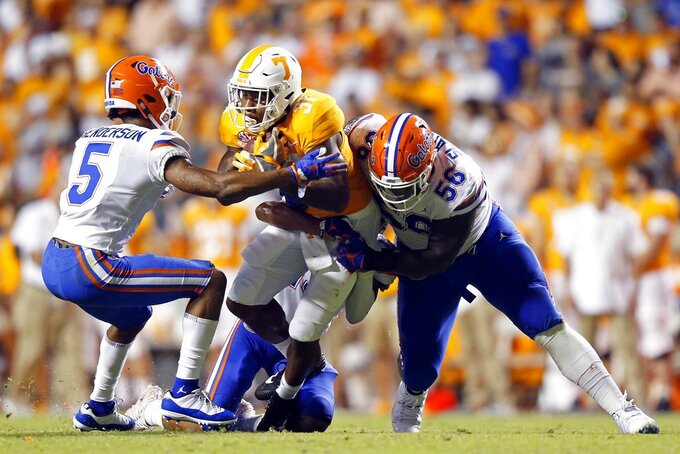 FILE - In this Sept. 22, 2018, file photo, Tennessee running back Madre London (31) is tackled by Florida defensive lineman Tedarrell Slaton (56) and defensive back CJ Henderson (5) in the first half of an NCAA college football game in Knoxville, Tenn. Tennessee has been outscored 69-16 in the first quarter of games this season and hasn't scored a first-quarter touchdown against a single Football Bowl Subdivision opponent. Tennessee (3-4, 1-3 SEC) will try to avoid digging itself another early hole Saturday when the Vols visit South Carolina (3-3, 2-3). (AP Photo/Wade Payne, File)

KNOXVILLE, Tenn. (AP) — Tennessee hasn't figured out exactly why it keeps sputtering through slow starts, but the Volunteers believe they can fix the problem.

The Vols have been outscored 69-16 in the first quarter of games this season and hasn't scored a first-quarter touchdown against a single Football Bowl Subdivision opponent. Tennessee (3-4, 1-3 SEC) will try to avoid digging itself another early hole Saturday when the Vols visit South Carolina (3-3, 2-3).

"It definitely can be corrected," Tennessee running back Ty Chandler said. "I think it will be."

Tennessee now must try to solve its first-quarter problems without offensive tackle Trey Smith, one of the team's best overall players.

Vols coach Jeremy Pruiitt announced Thursday that Smith is out indefinitely after doctors found blood clots in his lungs this week, a recurrence of an issue that also kept him from participating in spring practice . Smith started each of Tennessee's first seven games this year after earning second-team all-SEC honors as a freshman last season.

Smith's absence hinders an offense that already has been starting slowly just about every week. The only Football Bowl Subdivision team that has been outscored by a wider margin in the first quarter of games is Coastal Carolina, which has scored 23 points while allowing 87 in the opening period.

Central Michigan and Stanford are the only FBS teams that have scored fewer first-quarter points than Tennessee, though Northern Illinois also has only 16.

Tennessee's first-quarter results are even uglier when its 59-3 blowout of Football Championship Subdivision program East Tennessee State isn't taken into account. Tennessee led ETSU 10-0 at the end of the first quarter.

FBS foes have outscored Tennessee 69-6 in the first period. When they've faced Power Five teams, the Vols have been outscored 69-3 in the first quarter. Tennessee fell behind 28-0 in the first 11 ½ minutes of a 58-21 loss to No. 1 Alabama last week.

More than halfway through the season, the Vols are still searching for answers to why they start so slowly each week.

"I wish I knew," offensive tackle Drew Richmond said. "I'm not sure at all. That's one thing I know that the coaches have mentioned to us, and I see as well. We have to be a better first-half team. We have to be a better first-down team. We've got to just continue to improve early in the games because we finish strong. We fight. We're going to fight. We're never going to quit. But we've got to be able to move early."

The Vols are outscoring opponents 165-141 over the final three periods, but they've trailed after the first quarter every time they've faced a Power Five opponent.

"We've talked about it as a staff," Pruitt said. "We've been heavily involved in trying to figure out how to get going offensively to start the game."

One explanation for Tennessee's slow starts is its inability to establish a rushing attack.

Over its last three games, Tennessee has rushed for a total of 165 yards on 91 attempts, averaging a paltry 1.8 yards per carry. The Vols ran for 31 yards on 30 carries against Alabama.

Pruitt noted this week that the Vols "still have way too many mental errors" in their run blocking that has slowed the ground attack. He added that "sometimes your running backs have to run the ball the right way, too, so there's lots of things that go into it."

"Eventually we're going to get it clicking," Chandler said.

Pruitt said after the loss to Alabama that the game was "way too big" for some of Tennessee's players. Safety Nigel Warrior said some of his teammates simply didn't come to play that day.

Tennessee's ability to improve its starts could determine how the Vols finish the season.

Now that Tennessee has made it through the toughest stretch of its schedule, the Vols must win three of their last five games to become bowl eligible. That would be a major step forward for a team that went 4-8 and set a school record for losses last year .

"We were the worst team in Tennessee history last year," Richmond said. "That doesn't feel good at all. To have an opportunity to go to a bowl game, to finish on a high note, that means everything to a lot of people around here."