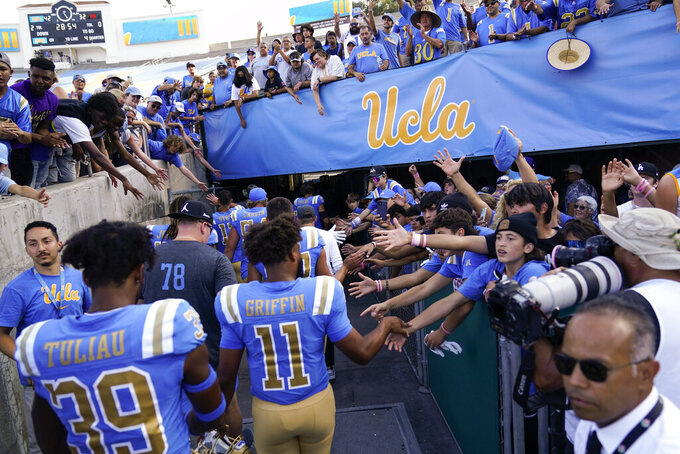 UCLA football players greet fans as they leave the field after a 42-32 win over Utah in an NCAA college football game in Pasadena, Calif., Saturday, Oct. 8, 2022. (AP Photo/Ashley Landis)

LOS ANGELES (AP) — Ralen Goforth is a standout linebacker at Southern California. His older brother, Randall, was a star cornerback at UCLA.

With both of Los Angeles' college football teams unbeaten midway through a season for the first time in a generation, the Goforth family group chat is an exciting place to be this fall.

“He just sends (UCLA's) scores in every week,” Ralen Goforth said with a sly grin. “And then he'll send the eye emoji, the ‘look’ emoji. I know he's talking to me. But I don't even reply.”

It's a vibe playing out across Southern California among families, friends and just about anybody who loves sports. Excitement is high on both sides of this crosstown rivalry for the resurgence of two long-prominent football programs that spent far too much of the past decade-plus in irrelevance.

Two seasons before the Trojans and Bruins head to the Big Ten, college football is already big again in Los Angeles.

“I think it is really exciting,” UCLA quarterback Dorian Thompson-Robinson said. "It’s cool, all the glamour with everything that’s going to happen over the next couple of weeks. But I think our main focus is not losing now. You get it, but it can be taken away from you real quick.”

The Trojans and Bruins both learned all about the fleeting nature of success during the past decade. Both schools had winning stretches under former coaches Clay Helton and Jim Mora, but neither managed to sustain it.

This simultaneous rise in 2022 feels much different. It's the expected result of both schools' organized, well-funded plans to fix their football teams, starting with extensive improvements to their on-campus facilities — the Wasserman Football Center at UCLA and the John McKay Center at USC — and continuing with the top-dollar hires of two accomplished head coaches who know what it takes to win.

At USC, Lincoln Riley has been everything the Trojans wanted when they lured the successful Oklahoma coach to the West Coast. Riley has immediately fielded a dynamic offense led by quarterback Caleb Williams, and his Trojans have met every challenge heading into a difficult road game Saturday against defending Pac-12 champion Utah. Riley is the first USC coach to start his career 6-0 since 1951.

“We understand that in this city, and I think it’s very fair, that we’ve got to go prove who we are as a team,” Riley said after the Trojans routed Rice in his debut last month. “And the more we do that, the more our fans will respond, the more that place will be filled up. ... We’re going to do everything we can as a team to keep working so that people can’t even stand the thought of not coming to a USC football game.”

At UCLA, Chip Kelly finally has the Bruins humming after 2 1/2 years of painfully slow rebuilding that tested fans' faith in the former Oregon mastermind. With nine consecutive victories in a roll beginning last season and culminating in back-to-back victories over ranked opponents in the past two weeks, the Bruins are shoving their way into the national title race as they prepare for a key road game against the Ducks next weekend.

“I just feel like it was part of the process,” said defensive back Mo Osling, one of the few remaining Bruins from Mora’s era. “You can never be too high, be too low, so we had to go through that to get to where we are right now. We just keep moving forward.”

The college game was the biggest football in the nation's second-largest city for 21 years after the departures of the NFL's Rams and Raiders in the 1990s, and that primacy benefitted Pete Carroll's incredible teams at USC in the 2000s. The professional game has been rising rapidly again in LA since the return of the Rams, who won the Super Bowl last February in their palatial new Inglewood home, SoFi Stadium.

But the Trojans and the Bruins are gathering serious momentum in Los Angeles, even if it's not always obvious in the Rose Bowl stands. UCLA has been lampooned nationally for its small crowds in Pasadena, but attendance is growing along with the Bruins' success — and the start of classes in the UC quarter system in late September.

The Trojans never lost much visible fan support, but those faithful are happier with their program than they've been in 15 years.

Both teams have a month of hard work to do before their annual crosstown showdown for the Victory Bell on Nov. 19, but the first half of the season has sparked anticipation of a Pac-12 title race that doesn't leave LA — and perhaps a second showdown between the Trojans and Bruins in the conference title game on Dec. 2.

“We're just concentrating on the next game in front of us,” Riley said. “If you don't treat every game, every week with the same importance, you don't get to where you want to go."