USC interim coach Williams out to turn connections into wins 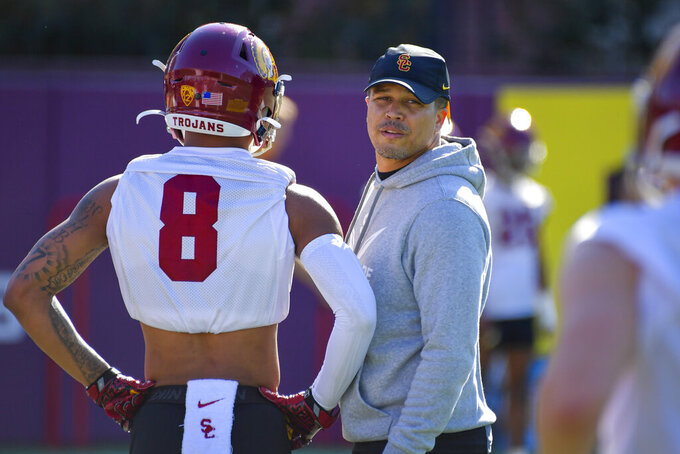 In this undated photo provided by the University of Southern California Athletics, USC associate coach Donte Williams looks on during NCAA college football practice in Los Angeles. Williams, the Trojans' cornerbacks coach and associate head coach, is taking over for the rest of the season alongside offensive coordinator Graham Harrell and defensive coordinator Todd Orlando, after the school fired head coach Clay Helton on Monday, Sept. 13, 2021. (John McGillen/University of Southern California Athletics via AP)

LOS ANGELES (AP) — Relationships have been Donte Williams' stock in trade, his ability to connect with recruits and their families making him one of the most sought-after assistant coaches in the Pac-12.

After the firing of coach Clay Helton on Monday, Williams will try to use those same bonds to salvage Southern California’s season, and perhaps leave athletic director Mike Bohn with a difficult decision to make as the West Coast’s historic college football power searches for a new leader.

Williams oversaw his first practices Tuesday and Wednesday after being named interim coach for the Trojans (1-1, 0-1 Pac-12), a title he only found out about minutes before Bohn and Helton informed players a change would be made. Bohn said the 39-year-old Williams got the role so offensive coordinator Graham Harrell and defensive coordinator Todd Orlando can continue focusing on game planning and calling plays.

Williams also has familiarity with many USC players on both sides of the ball after having recruited them during his time as cornerbacks coach at Arizona, Nebraska and Oregon before joining USC in February 2020. It was his prowess in bonding with high school players that contributed to sending USC’s efforts to sign the best in its own backyard into a tailspin in recent years, helping the Ducks land local standouts such as linebacker Justin Flowe and corner Mykael Wright.

So when Bohn and chief of staff Brandon Sosna were working to bolster USC’s recruiting efforts at the same time Helton was overhauling his defensive staff last year, Williams checked all the boxes.

Those additions have turned things around in recruiting, as USC currently has commitments from several elite 2022 players. The elevation of Williams should give the Trojans a better chance of holding on to that class until a new coach is named.

But the immediate goal is to produce wins on the field, starting at Washington State (1-1) on Saturday. Williams hopes to use his ties throughout the USC roster to establish greater accountability after penalties and breakdowns piled up in what would end up being Helton's last game, an embarrassing 42-28 home loss to Stanford.

Getting things turned around wouldn’t be out of place considering USC’s recent history with interim coaches. Ed Orgeron went 6-2 after replacing Lane Kiffin in 2013, becoming a favorite of players and fans alike before being passed over for the permanent job in favor of Steve Sarkisian. Helton was promoted two years later after reaching the Pac-12 title game following Sarkisian’s dismissal.

With Bohn promising a “wide open” national search, it seems unlikely Williams could follow in Helton’s footsteps. However, a strong showing could put him in the mix for a variety of jobs, everything from remaining at USC as an assistant with greater responsibilities to becoming a defensive coordinator in the Power Five or even getting the nod as a head coach at a Group of Five school, though Williams said that isn’t his immediate concern.

“I have full faith in USC that they’ll make the best decision, make the right choice for these athletes, right, for these student-athletes. And I have full fledged trust that they will do that, so I’m about going 1-0 today,” he said.

Williams, a Los Angeles native, did not aspire to be a coach after playing defensive back in college at Syracuse and Idaho State and spending two seasons in the Arena Football League’s developmental ranks trying to make it as a professional.

Now he finds himself as the first Black head coach for USC, a milestone Williams does not take for granted.