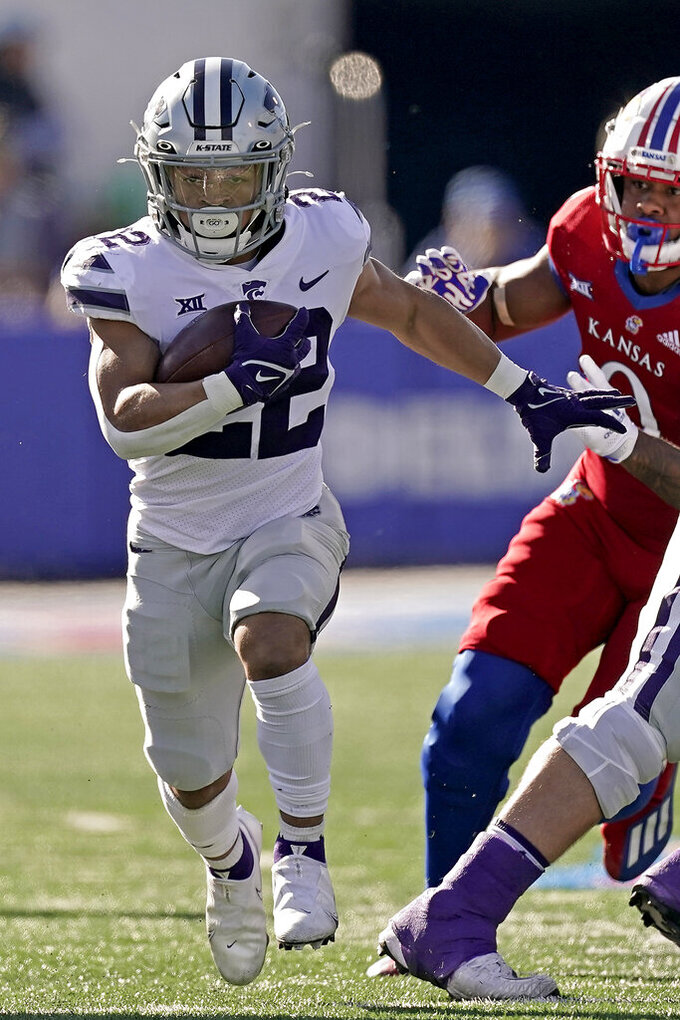 Kansas State running back Deuce Vaughn (22) runs the ball during the first half of an NCAA football basketball game against Kansas Saturday, Nov. 6, 2021, in Lawrence, Kan. (AP Photo/Charlie Riedel) 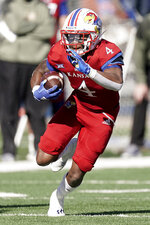 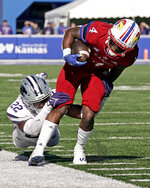 LAWRENCE, Kan. (AP) — Kansas State climbed quickly into the Top 25 on the back of three straight wins to start the season, then the Wildcats plummeted just as quickly from the poll after three straight losses to open Big 12 play.

Now, they're on the climb again.

Deuce Vaughn had a career-high 162 yards rushing and three touchdowns, Skylar Thompson shredded Kansas through the air before a cheap shot knocked him out of the game in the fourth quarter, and the Wildcats cruised to a 35-10 victory over the Jayhawks on Saturday that wasn't as close as the final score.

“We're bowl-eligible, we have won three games in a row. It tells you an awful lot about the character and resolve of our guys the way we started off in conference,” Kansas State coach Chris Klieman said. “There was always continued belief in that locker room, continued belief in our leaders that we could turn it around.”

Thompson was 19 of 24 for 244 yards and a touchdown before he was hit by the Jayhawks' Gavin Potter out of bounds along the Kansas State sideline. Thompson remained on the ground for several minutes before finally getting up.

The personal foul put the ball just outside the goal line, and Vaughn plowed in for his final rushing TD of the day.

“Some of it's bang-bang stuff,” Klieman said, “but (Thompson) is fine. He's ready to come back next week and get after it.”

Vaughn also caught five passes for 60 yards, and Malik Knowles had 94 yards receiving and a touchdown, as the Wildcats (6-3, 3-3 Big 12) beat their rival for the eighth consecutive time at Memorial Stadium and 13th straight overall.

Devin Neal had 62 yards rushing for the Jayhawks (1-8, 0-6), who were down to third-string quarterback Jalon Daniels by the third quarter. Jason Bean was banged up early but was ineffective anyway, and backup Miles Kendrick was carted off after getting hurt on his second play of the game.

“Jason was shaken up, tried to go back. Miles was hurt. I think those injuries and having them carted off the field took a little bit of wind out of us,” Kansas coach Lance Leipold said. “I don't want to take away anything from Coach Klieman and his program, I think we just lost a little intensity.”

The Jayhawks trailed 21-3 by halftime and it could have been much worse.

On offense, they watched running back Torry Locklin get carted off the field before Bean and Kendrick got hurt, and they saw normally sure-footed Jacob Borcila miss one of his two field-goal attempts.

On defense, the Jayhawks allowed the Wildcats to gain a staggering 10.7 yards with every snap.

Kansas State's opening touchdown drive was highlighted by Vaughn's 30-yard run, which set up his own 1-yard plunge a few minutes later. The next drive took all of two plays and ended when Thompson hit Knowles with a 68-yard strike. And the Wildcats' third first-half TD came after two big passes to Vaughn set up Ben Sinnott's short scoring run.

The momentum sure didn't change over halftime.

After a false start penalty, Vaughn took a handoff on the first play of the second half, sped around the left side of a plodding Kansas defense, made a quick cut upfield and didn't stop until he reached the end zone 80 yards later.

And when the Jayhawks finally got on the board with Daniels' TD pass to Kwamie Lassiter II, the Wildcats answered with a 75-yard touchdown march. It ended two plays after Thompson was knocked into the sideline with Vaughn's TD run.

“It's tough. Two weeks in a row something like that happened, where I'm trying to get out of bounds and trying to protect myself," Thompson said. “It just knocked the wind out of me. I'm fine. It's just unfortunate."

Kansas State has won three straight on the heels of a three-game losing streak. Thompson's return from an injury sustained against Southern Illinois has been a big reason why. He threw for 300 yards against Texas Tech and was solid in last week's win over TCU. Vaughn is a legitimate star, but he's much less potent without Thompson directing the show.

Kansas is still no closer to closing the gap on its biggest rival. The Wildcats were simply faster, stronger and more athletic, winning at the line of scrimmage on both sides of the ball and making key plays in the secondary.

Kansas: The Jayhawks begin a two-game swing through the Lonestar State against Texas on Saturday.