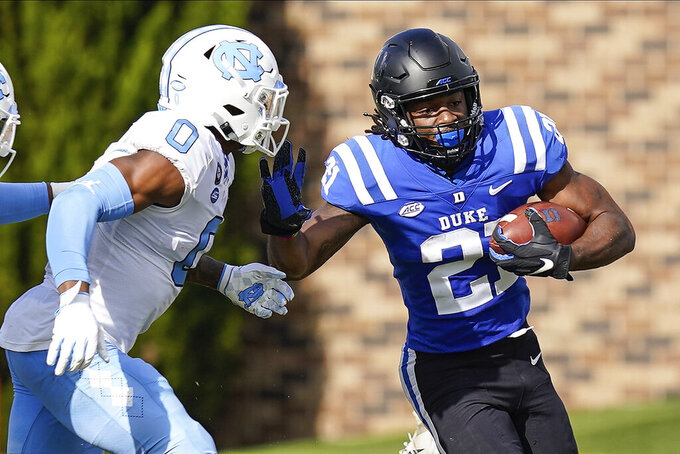 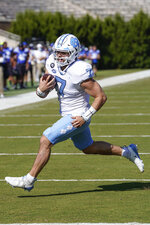 DURHAM, N.C. (AP) — North Carolina found the ideal way to get back on track.

The Tar Heels scored at just about every opportunity for a half and steamrolled rival Duke in a 56-24 victory Saturday afternoon, rebounding from a devastating loss a week earlier.

“Not sulk on it,” linebacker Chazz Surratt said. “Just be ready for this week.”

Sam Howell threw three touchdown passes and rushed for another score for the Tar Heels (5-2, 5-2 Atlantic Coast Conference), who were playing without a national ranking for the first time this season. Just like last month, they responded from a three-point loss to whip a neighboring rival, with North Carolina State the previous victim.

Discounting the one snap after getting the ball back with a second left to play in the first half against Duke, the Tar Heels scored touchdowns on their first seven possessions.

“When everything is clicking, it feels amazing,” Williams said. “Just keeping them off balance.”

“He does everything right,” Brown said of Williams. “He’s as good as anyone in the country breaking tackles.”

Backfield mate Michael Carter scored two touchdowns, posting 85 yards on the ground on 17 attempts. Howell finished 18-for-27 for 235 yards and an interception.

“We know how important this game is,” said Howell, whose team retained the Victory Bell with its second win in a row in the series. “How much it means to our fans.”

The Tar Heels realized they couldn’t afford any more hiccups if they want to have crucial games later in the season. Combining that with another date with an in-state opponent, this matchup had their attention.

“That’s something that everybody took seriously through the week,” North Carolina linebacker Jeremiah Gemmel said of Duke’s likely motivation.

The Blue Devils (2-6, 1-6) are guaranteed a losing regular-season record for the third time in five seasons.

“You’ve got to give them credit for coming out with that game plan,” Duke defensive end Chris Rumph II said. “They executed. We’ve got to go back to the drawing board.”

North Carolina posted two touchdowns less than five minutes into the game. Howell’s 2-yard fourth-down pass to Williams accounted for the first score and Howell ran 3 yards untouched for the next TD.

It was 21-0 with 2:06 left in the first quarter after Williams’ 4-yard touchdown run. The Tar Heels added to the onslaught on the second play of the second quarter when Carter bulled into the end zone at the end of a 22-yard pass play from Howell.

It was a strange setting as these rivals met for the 107th time, yet Wallace Wade Stadium was empty of fans because of coronavirus-related restrictions on Duke’s campus.

North Carolina: The Tar Heels have scored more than 40 points in four games, including three in a row. This time, they eclipsed 40 by halftime.

Duke: The Blue Devils committed two turnovers, boosting their season total to 25. They have just 14 takeaways this season, with one against North Carolina on Michael Carter II’s third-quarter interception.

The largest margin of victory in a North Carolina-Duke football game is a 50-0 outcome in favor of the Tar Heels in 1959 in Durham. While the Tar Heels didn’t match that, they did compile the fourth-highest point total by either team in the series.

It was a comfortable margin.

“We got to play lots of people,” Brown said. “Other than winning the game, that was probably the most important thing.”

Duke: The Blue Devils have an open weekend before concluding a three-game homestand Nov. 21 vs. Wake Forest.