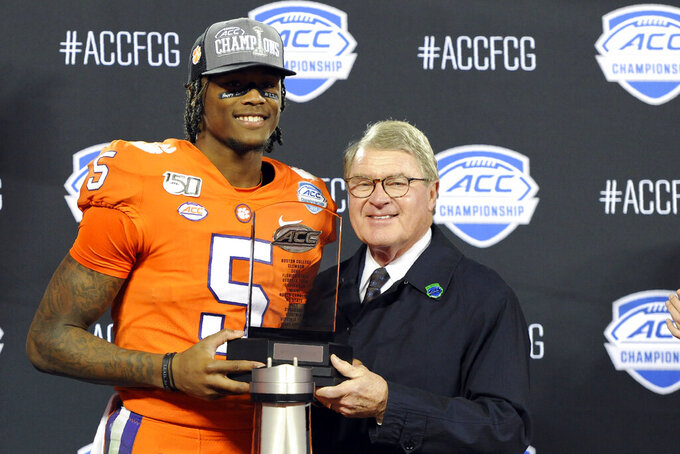 When John Swofford became commissioner of the Atlantic Coast Conference in 1997, the league was basketball-centric and North Carolina-focused.

In the 23 years since, the conference has grown into a 15-school behemoth spanning 10 states. Swofford brought stability and unity to the ACC at a time when it seemed vulnerable, creating a conference that could flourish in a football-dominated college sports landscape.

The ACC announced Thursday the 2020-21 academic year will be Swofford's last as commissioner. The 71-year-old will continue in the role until his successor is in place and help with the transition. Swofford said he and his wife, Nora, had been planning for “some time” for this be his final year.

A former football player and athletic director at North Carolina, Swofford's 24-year run as commissioner will be the longest in the history of the 67-year-old conference.

“It has been a privilege to be a part of the ACC for over five decades and my respect and appreciation for those associated with the league throughout its history is immeasurable,” said Swofford, a native of North Wilkesboro, North Carolina. “There are immediate challenges that face not only college athletics, but our entire country, and I will continue to do my very best to help guide the conference in these unprecedented times through the remainder of my tenure.”

Swofford succeeded Gene Corrigan as commissioner. At the time, almost half the conference's nine schools were all within a few miles of one another in North Carolina.

The ACC grew to 12 teams and added a football championship game by 2005; it reached 15 schools by 2013 with the addition of Notre Dame.

“I think that John’s moves for the ACC were absolutely the right moves. To move towards a football culture, a football set of institutions that could compare with any of the conferences in the country,” said former Big Ten Commissioner Jim Delany, who played basketball at North Carolina and graduated in 1970, a year before Swofford.

The conference also launched a television network last August, a project that Swofford spent years pursuing as the ACC hoped to close the financial gap with its Power Five conference peers.

He played a pivotal role in the development of the College Football Playoff, and was an early supporter of an expanded postseason to crown a champion along with late former Southeastern Conference Commissioner Mike Slive.

Five years before massive realignment swept across college sports, Swofford and the ACC moved to fortify the conference. The additions of Boston College, Miami and Virginia Tech pushed the ACC to 12 teams, but also damaged the rival Big East. The ACC later lured more teams out of the Big East, bringing in Pittsburgh, Syracuse as well as Notre Dame, though not in football.

Swofford built a reputation for springing huge moves, seemingly out of nowhere after meticulous planning and preparation had been done behind the scenes. His retirement announcement was no different; Swofford informed conference leaders during a meeting Thursday morning.

“One of the things I've always admired about John is he never made it about John,” Notre Dame athletic director Jack Swarbrick said. “That's a real leadership strength of his.”

Even with the additions by 2013, there was speculation about the ACC losing schools at that time. In the end, only Maryland departed (Big Ten). The ACC added Louisville for the 2014-15 season to fill the void.

“If you could wind the clock back, and give them that hand, it's hard to imagine someone coming out with a better result than John produced," Swarbrick said.

ACC basketball continued to thrive under Swofford and he expanded its reach, moving the league's tradition-rich basketball tournament out of its usual North Carolina home in Greensboro to places such as Washington, D.C., and New York.

His desire to broaden the conference's brand often drew criticism, but he was able to balance the varying needs of new members and old members, football schools and basketball schools in a way that kept the peace — at least publicly.

The ACC Network was part of an extended media deal with ESPN that runs through the 2035-36 season and included a grant-of-rights that helps bind conference members financially and protects the league from future realignment.