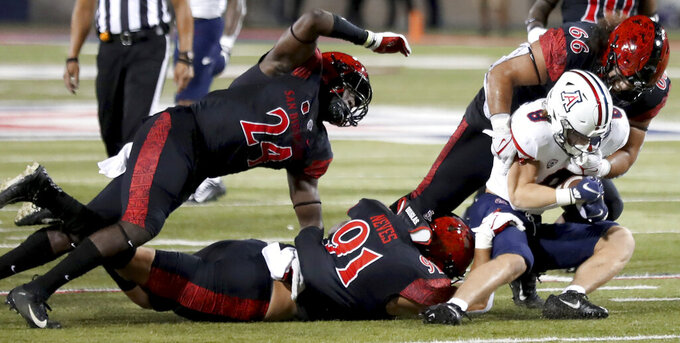 CARSON, Calif. (AP) — Still stinging from a loss to an old rival, Utah is back on the road this weekend to face another former conference foe with an unbeaten record and plenty to gain from a win over the Utes.

Coach Kyle Whittingham's Utes (1-1) are in danger of falling into an early-season hole when they visit impressive San Diego State (2-0) for their final nonconference game Saturday.

Utah left behind its annual meeting with the Aztecs more than a decade ago when it moved to the Pac-12, but a 26-17 loss last week to BYU has left Whittingham's team needing a win over another former Mountain West rival to avoid consecutive 1-2 starts for the first time in his largely successful tenure.

While Utah is in danger of a big stumble, San Diego State is on the verge of a step up. The Aztecs drilled Arizona 38-14 last week to get off to a 2-0 start for a third consecutive season, and a win over the Utes would put them in the conversation for a national ranking.

What's more, the Aztecs are 6-2 against Pac-12 teams over the past six seasons, posting the nation's best nonconference record against the West Coast's top conference.

Aztecs coach Brady Hoke knows his team will have to play much better than it did against the rebuilding Wildcats to knock off another Pac-12 program.

“Our improvement from Week 1 to Week 2 was good, not great,” Hoke said. “We’ve got to play better across the board. We know we can’t have eight penalties. That’s not smart football. A lot of fundamentals we need to correct across the board.”

San Diego State could be without starting quarterback Jordon Brookshire after he hurt his foot last week against Arizona. Hoke typically provides no information on injuries, but Brookshire didn't practice Monday or Tuesday.

Brookshire is still listed atop the Aztecs' depth chart at quarterback, but if he can't play, Lucas Johnson will step in. Johnson appeared to be in the lead to win the starting job throughout fall camp, but Brookshire got past him late in the process.

Both Brookshire and Johnson are athletic quarterbacks who present a running threat to the Utes' defense. Johnson has been kept off the field by injuries for much of his Aztecs career.

San Diego State has rushed for 519 yards in its two games this season, and Utah has given up 144 yards per game on the ground so far. Whittingham realizes his defense must ramp up its toughness to hang with another strong opponent, but he also pointed to Utah's failure to get a sack or a takeaway against BYU as serious problems to be remedied.

Both schools should have a solid fan turnout at Dignity Health Sports Park, the home stadium of the LA Galaxy. The Aztecs are in their second season at the Los Angeles Chargers' former home field while San Diego State's new stadium in Mission Valley is under construction.

“It would be great if we could get Aztec Nation there” for the highest-profile nonconference game on their schedule, Hoke said. “Hopefully to black it out and get them up there, that would be a lot of fun for our guys.”

Whittingham is hoping for a healthy contingent of Utah fans from the school's large Los Angeles-area alumni base.

These schools haven't met since 2010, the Utes' final season in the Mountain West before they joined the Pac-12. Utah went 5-1 against the Aztecs during the first six years of Whittingham’s head coaching tenure, winning the last five straight.