Back in Top 25, Virginia remains focused on winning division 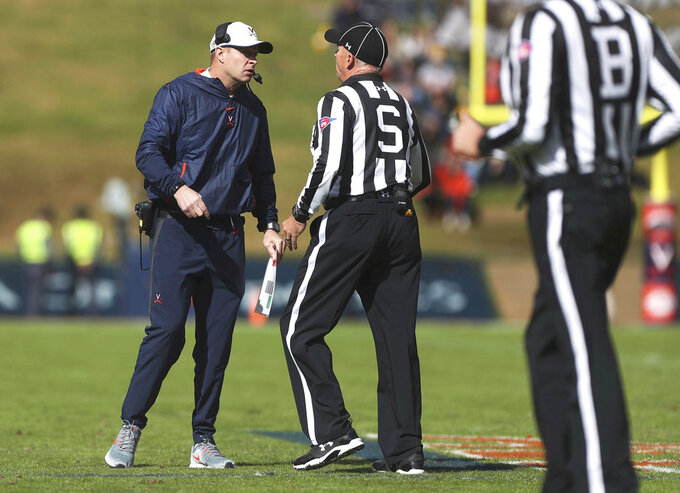 FILE - In this Oct. 27, 2018 file photo, Virginia head coach Bronco Mendenhall speaks to the officials between plays during the second half of an NCAA college football game against North Carolina in Charlottesville, Va. Now that the Virginia Cavaliers are ranked, bowl eligible and have announced that winning the ACC's Coastal Division is their goal, they want to maintain the focus that has led to a three-game winning streak. The Cavaliers next challenge comes Friday when they host Pittsburgh in an ACC matchup.(Zack Wajsgras /The Daily Progress via AP, File)

CHARLOTTESVILLE, Va. (AP) — Now that the Cavaliers are ranked, bowl eligible and have announced that winning the ACC's Coastal Division is their goal, they want to maintain the focus that has carried them to a three-game winning streak.

Coach Bronco Mendenhall would rather the 23rd-ranked Cavaliers keep some things to themselves, but appreciates their excitement, too.

"I'm never really comfortable about promising things in advance, but I don't have a problem with establishing and framing goals," he said Monday, one day after Virginia moved into the Top 25 for the first time since 2011. "I think in that moment when they're saying, 'We want the Coastal,' I think it was just simply some clarity on it is possible. We have a real chance. We're acknowledging that."

Virginia (6-2, 4-1 ACC) will face another Coastal Division foe on the rise when Pittsburgh (4-4, 3-1) visits on Friday night. The Panthers are coming off a wild 54-45 victory against Duke, a game in which they ran for 484 yards. They also have won three straight and four of their last five meetings with the Cavaliers.

It will be strength vs. strength when the Panthers have the ball. They average 228 rushing yards, while Virginia allows just 113. In their last two games, the Cavaliers yielded just 58 rushing yards on 27 attempts by Duke, and just 66 yards on 22 attempts against North Carolina.

Free safety Joey Blount relishes the opportunity to be a big part of the solution against Pitt, and to see how the Cavaliers stack up.

"It just makes you have to come up and play the run harder than ever," he said. "... It just makes me more of a factor in the run game, playing inside the box as well as being aware of the passing and play action stuff. Pitt's going to have a really good scheme for us and we just have to be prone to violence for Friday."

Unlike last season, when becoming bowl eligible for the first time since 2011 set off a wild clubhouse celebration, the Cavaliers were subdued after beating the Tar Heels and spoke of how, to a man, they expected to repeat that this season and set preseason goals that would be far more significant to reach.

"We want to win the Coastal. We want to go to the ACC championship," Blount said. "People just set us into a standard of UVA football is this, UVA football is that. We were ranked last I think, or something (in the preseason ACC poll). And I think we came out and proved ourselves that we're not. We're as good as we want to be."

A year ago, after starting 5-1, the Cavaliers lost two straight and five of their last six. This year, they resolved not to let it happen again.

"I think where we are as a team right now just shows that we can really play with whoever we want to play with," Blount said. "We're our own enemies right now. We're the only people that can hold each other back. So I think from last year, we talked about it before, it's just what we want to do."