Big Ten in A1 position for CFP berth, or even being shut out 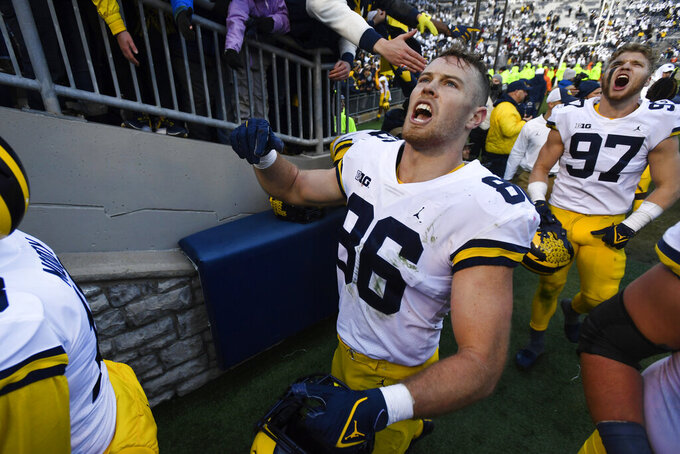 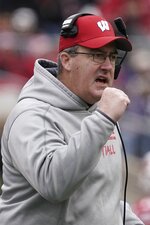 PISCATAWAY, N.J. (AP) — With two weeks left in the regular season, the Big Ten has positioned itself to get a third straight berth in the College Football Playoff, and possibly two if an avalanche of things go the right way.

No. 5 Ohio State, No. 7 Michigan State and No. 8 Michigan all have 9-1 records and are in position to get the league a third straight spot in the playoff. It would be the league's sixth berth in the eight years of the national championship tournament.

Think No. 19 Wisconsin (7-3), No. 18 Iowa (8-2), or Minnesota (6-4) winning the West Division and then the conference championship game. No team with more than one loss has made the final four in college football.

Getting two berths in the playoffs is a long shot.

Don't spend too much time thinking about that one.

Concentrate on one team and focus on four-time defending conference champion Ohio State, which finishes the season with games at home against Michigan State and away at Michigan. The Buckeyes have won 25 straight league games and have appeared in the conference title game five of the past seven years.

“We got very good teams from top to bottom,” Ohio State coach Ryan Day said. "You have to bring it week in and week out. I think that’s the challenge right now. You’re seeing some really good teams in the league. It’s obviously a lot stronger this year than maybe in the last couple.”

If Ohio State wins out, it's most likely opponent in the conference title game would be Wisconsin, which has overcome a dismal 1-3 start and won six straight. The Badgers host Nebraska this weekend and finish at Minnesota.

The Badgers, who have one of the nation's best defenses, have been in the title game two of the past four seasons, with Northwestern representing the West Division the other two times.

“The West is just so much more equal,” former coach and Big Ten Network analyst Gerry DiNardo said. "There is no clear-cut winner. In recent years, Wisconsin has done the best job with the talent they have.”

Minnesota coach P.J. Fleck said the play in the Big Ten has been incredible this season. There have been close games and upsets almost every week.

“I think when you kind of look at Ohio State where they are, I think they’ve set themselves apart from everyone else,” Fleck said. "I think that’s pretty easy to see. But when you look at everyone else that’s kind of in that mix, anybody can beat anyone on any given Saturday.”

The final two weeks will show whether the Michigans have been able to close the gap on Ohio State.

The Spartans, a 19-point underdog to the Buckeyes, control their own fate. If they beat Ohio State and then Penn State at home the following week, they go to the conference title game with a shot to be in the College Football Playoff.

“We put ourselves in a position to play meaningful games in November,” Michigan State coach Mel Tucker said. “We have a tremendous challenge ahead.”

Jim Harbaugh, now in his seventh season at Michigan, desperately wants to lead the Wolverines to their first Big Ten title since 2004.

Ohio State, of course, is standing in the way. The Buckeyes have beaten their rivals a record eight straight times, and 15 of 16 times.

“You’re in a playoff mindset,” said Harbaugh, who is focused on Maryland this weekend. “You’re in a mentality that you have to win. If you don’t win, you’re going to be out of the championship race.”