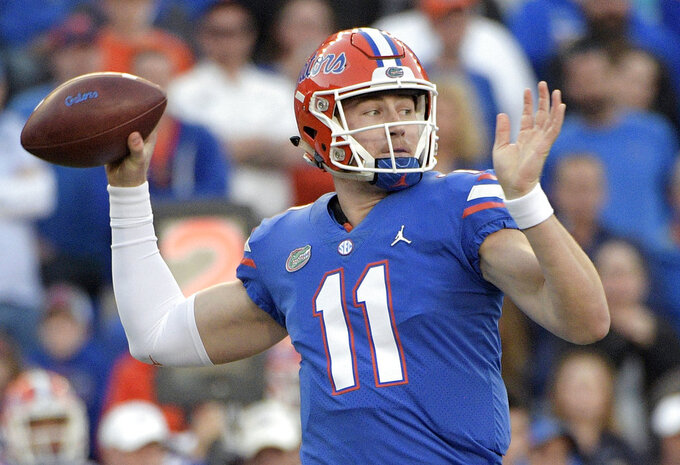 FILE - In this Nov. 3, 2018, file photo, Florida quarterback Kyle Trask throws a pass during the second half of an NCAA college football game against Missouri in Gainesville, Fla. The father of Florida quarterback Kyle Trask says his son is out for the season because of a broken foot. Michael Trask posted on Facebook that Kyle fractured a foot practicing a trick play Wednesday, Nov. 7, 2018. (AP Photo/Phelan M. Ebenhack)

GAINESVILLE, Fla. (AP) — The father of Florida quarterback Kyle Trask says his son is out for the season because of a broken foot.

Michael Trask posted on Facebook that Kyle fractured a foot practicing a trick play Wednesday. The 19th-ranked Gators (6-3, 4-3 Southeastern Conference, No. 15 CFP) declined comment when asked about Trask's injury, which was first reported by 247sports.com.

"Gator Nation, I am sad to say that Kyle was injured today in practice while doing a trick play where he hands off to the RB and then goes out for a pass," Michael Trask posted. "The throw to Kyle was low and when he planted his foot to catch the pass he felt a pop. Unfortunately he fractured his foot and will be out for the season. Just a freak injury. The good news is that it will be minor surgery and he will be 100% for spring ball in 2019. Thank you for all the well wishes and support for Kyle, we appreciate you very much! Continue to pray for Kyle's recovery."

Coach Dan Mullen had been deciding between Feleipe Franks and Trask to start against South Carolina (5-3, 4-3) in the Swamp on Saturday, but it now appears Franks will be the choice. Mullen has made it clear he wants to redshirt highly touted freshman Emory Jones.

Franks was benched last week in a 38-17 loss to Missouri . He completed 9 of 22 passes for 84 yards. Trask replaced Franks in the third quarter and completed 10 of 18 passes for 126 yards and a touchdown.

Trask, a redshirt sophomore, had foot surgery in 2017 and missed the season. It's unclear if he broke the same foot.

When asked about the QB competition Wednesday, Mullen declined to provide details about his plan at the all-important position.

"I'm not going to share what our strategy is," Mullen said on the weekly SEC coaches teleconference. "I haven't done that all year, so I don't plan on sharing that strategy just yet."

Franks has 16 touchdown passes and six interceptions in his second season as a starter.

He played in 11 games last year, with eight starts, and finished with nine touchdown passes and eight interceptions. He now has been benched in three games and lost his starting job two other times.