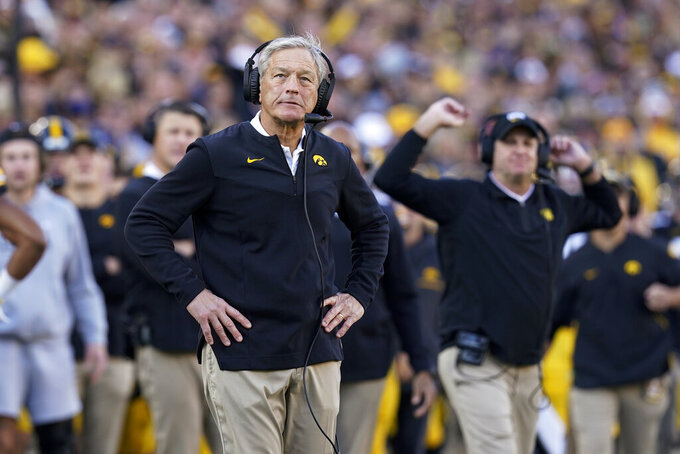 The timeline of when a new committee will be formed, and who will be on it, was unclear.

“This is a time right now to think about football, think about a lot of things,” Ferentz said at a news conference. “This is one we want to give thought to before we really formulate things.”

Former offensive lineman David Porter, the leader of the original 10-person committee, suggested in early January that it was time for Iowa to part ways with Ferentz. The coach said he had decided to restructure the committee last fall, before Porter’s comments were made in a text message to other members of the committee.

“We’ve been in existence 16-18 months, and there were a lot of hours spent,” Ferentz said. “So, probably in fairness to the guys on the committee, maybe (it’s) a chance to give them a reprieve and get some fresh faces. I’m not quite sure where we’ll go, and there may be some repeat members if they volunteer and they’re open to it.”

Ferentz said he wants some of the members of the new committee to be players who have been on the team recently. Defensive back Jordan Lomax was the youngest player on the previous committee, having last played for the Hawkeyes in 2015.

“I think it’s like anything, sometimes a little change is good,” Ferentz said. “I want guys who are willing, not tired or fatigued or whatever. We’ll go from there.”

Asked about Porter’s statement that Ferentz should be replaced, the coach said, “It’s an opinion. And obviously everybody is entitled to their opinions. ... There’s not much to react to, other than I have a different opinion.”

Ferentz is the longest tenured Bowl Subdivision head coach, having been at Iowa since 1999. Ferentz received a contract extension in January that runs through the 2029 season and pays him $7 million a year.

Iowa hired the Husch Blackwell law firm in 2020 to review the football program after numerous former players, most of them Black, spoke out on social media to allege racial disparities and mistreatment. Their activism came as protests against racial injustice began around the nation after the death of George Floyd and after attempts to raise concerns inside the program resulted in only minor changes.

The review said some of the football program’s rules “perpetuated racial or cultural biases and diminished the value of cultural diversity.”

The program cut ties with longtime strength and conditioning coach Chris Doyle after agreeing to pay him $1.1 million, but no other changes were made to the coaching staff. Doyle has denied allegations that he bullied and discriminated against players.

The alumni committee was formed in the wake of the review, and its charge was to offer ideas and help facilitate acceptance, diversity and inclusion in the program.

“My first commitment is still to the players,” Ferentz said. “That’s the work of this committee, to make this a better environment for our players that are here. Those are the guys I’m most committed to, and our job is to give them a great environment. Hopefully when they leave here, they graduate and have had a great experience and maximize their football. Go fly and run on their own, and we’re still here to support them. That’s our goal.”

“As good as I think they are football-wise, I think they’re better human beings and people,” Ferentz said. “I encourage you to ask our players about who they work with on a daily basis. And I would also encourage you, if you can find out who was on the committee, talk to everybody on the committee, not just an individual, and see what they think. We’ll let the record stand where it may.”