Flowers blooming at BC into one of ACC's best receivers 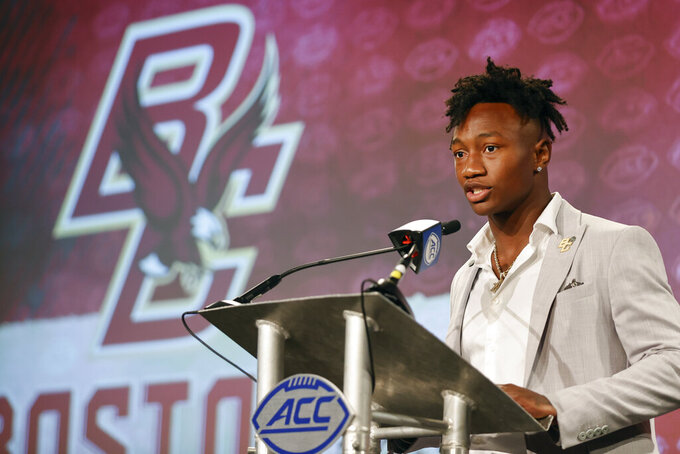 BOSTON (AP) — To Zay Flowers, unfinished business means getting his degree from Boston College — and more.

“Win the division, go out the right way,” the BC receiver said on Friday after the Eagles opened training camp on a blistering day in Chestnut Hill. “I feel like we can be one of the best in the ACC.”

After leading the Atlantic Coast Conference in 2020 with nine touchdown catches and grabbing 56 passes for 892 yards, Flowers had a solid junior year last season with 44 receptions for 746 yards and five touchdowns. During the offseason, he toyed with the idea of transferring to a school where name, image and likeness funding might be more lucrative, but he opted to stay at BC.

Flowers, one of 14 children of a widowed father, said he would be the first in his family to get a college degree. His father supported Flowers' decision to return to BC, even though the receiver potentially could have earned more in NIL proceeds at other schools -- reportedly as much as $600,000.

A big reason for Flowers' confidence is BC quarterback Phil Jurkovec, who is healthy again after playing in just six games last season with a broken bone in his throwing hand. Jurkovec completed 8 of 17 passes for 143 yards and a touchdown in the Boston College spring game.

“I just feel good about going into the season and feel I’m going to do a lot of big things,” Flowers said.

Flowers said he worked during the summer on running routes, making contested catches and keeping up his strength and speed. Jaelen Gill and Jaden Williams offer Jurkovec other options at wideout, and Notre Dame transfer George Takacs is expected to be a big target at tight end.

“In my opinion, Zay is the best receiver in the country,” said Gill, who missed the start of last season because of a stress fracture and finished with 24 catches for 269 yards. “I think we all have, you know, have our own unique play style. We all play bigger than we are. So I think we all complement each other real well.”

If Jurkovec can stay healthy — and he hasn’t been able to do that yet in his first two years in the Heights — Boston College could make a big jump after finishing 6-6 in each of coach Jeff Hafley's first two seasons. In both of those years, Boston College qualified for a bowl game but opted out.

The goal: Winning the Atlantic Division after finishing tied for last in 2021.

“The urgency has always been the same,” Hafley said. “Do I have a little bit more of an edge to me because I’m still a little bit pissed off on how it went (last year)? Yeah, I am. But the urgency is the same. Exactly the same. So maybe you’re just seeing a different edge out of me and maybe you’re seeing me just being more comfortable being a head coach and being who I am.”