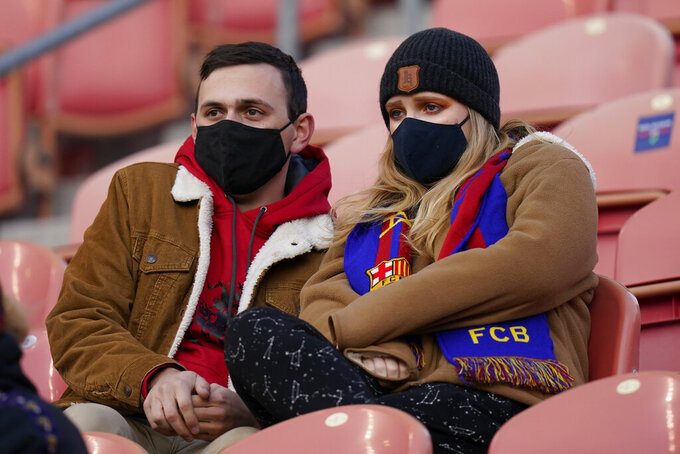 South Carolina football coach Will Muschamp said two players have tested positive for COVID-19 while another nine are being held out because of possible contact with the infected players.

Muschamp gave the update Thursday night. The Gamecocks open the season at home Sept. 26 against No. 25 Tennessee.

Muschamp said those who came in contact with players who tested positive must sit out 10 days because of guidelines from the state of South Carolina. Muschamp said his players and staff have done a good job of wearing masks when out and staying socially distant from others.

Clemson’s men’s soccer team has canceled its trip to Virginia for a preseason exhibition on Friday after two Tigers tested positive for COVID-19.

Coach Mike Noonan said the health and safety of his team comes first. He said he’ll use the time to keep monitoring for spread of the virus among players and staff.

Clemson athletes training on campus are tested three times a week for the coronavirus. The Tigers are expecting to open the regular season against Wake Forest on Sept. 18.

Clemson was picked this week as the favorite to win the ACC championship.

Wisconsin says 83 athletes have tested positive for COVID-19 at some point since the school started testing them in early June.

Wisconsin athletic director Barry Alvarez had announced Wednesday that the school’s football and men’s hockey teams were taking a two-week break from team activities as part of the school’s COVID-19 testing protocols.

The start of the college hockey season will be delayed because of the coronavirus pandemic.

The 11 Division I men’s and women’s hockey conferences represented by the Hockey Commissioners Association issued a joint statement saying their seasons would be delayed. Each conference is expected to announce plans for the season individually.

Minnesota is dropping men’s indoor and outdoor track and field, gymnastics and tennis because of budget concerns brought about by the coronavirus pandemic.

School officials said the elimination of the sports will be effective at the completion of their 2020-21 competition seasons, which the teams will play if “health and safety precautions allow.”

The athletic department is eliminating eight other positions in addition to those that will be cut because of the four programs being discontinued. School officials said that’s part of a personnel cost-reduction that should save $1.3 million this fiscal year.

Washington laid off 16 employees and instituted furloughs or reductions in hours for another 35 employees as part of a second-round of cost-saving measures by the school.

Washington said the 16 layoffs are a combination of vacant positions and some currently filled roles.

Washington had previously announced salary reductions for some members of the athletic department and instituted furloughs for all athletic staff.

“We have remained committed to maintaining all 22 of our programs and to providing a world-class education and athletic experience for our students,” Washington athletic director Jen Cohen said in a statement. “In order to fulfill this commitment we are having to make some challenging personnel decisions that impact long-standing and dedicated members of our department. The current pandemic continues to have a major impact on our entire country and we are not immune.”

The layoffs and furloughs are part of Washington’s efforts to cut $28 million in expenses from its athletic budget due to the COVID-19 pandemic. The school is projecting a revenue shortfall of more than $50 million and that’s if a winter or spring football season is played.

The University of Texas will require students to pass a COVID-19 test before they’ll be allowed to attend the No. 14 Longhorns' season opener against UTEP on Saturday night.

Texas has up to 3,000 student tickets available for the football game. To claim a ticket, a student must pass a university-provided rapid test on Friday, the school said. The test will be free to students at a cost of about $90 per test to the university.

Texas will allow about 18,000 fans to attend the game at a stadium that typically seats close to 100,000. The testing requirement doesn't apply to the general public attending the game.

Texas doesn’t require students to be tested before they attend classes, although most are taking classes online, and gatherings of 10 or more people are generally not allowed.

“For a single event where many are gathering, we felt this additional safety measure was beneficial,” Texas spokesman J.B Bird said.

Kentucky will limit seating at Kroger Field this season to 20% of capacity, about 12,200, with physical distancing for its five Southeastern Conference home games.

The school’s coronavirus protocols announced Thursday include mobile ticketing and parking passes and face coverings at all times, except while eating or drinking. Tailgating and pregame gatherings in the parking lots have also been eliminated, including RVs.

Kroger Field will undergo enhanced cleaning and sanitization before and during events and feature hand washing and sanitizing stations throughout. The Wildcats’ home opener is Oct. 3 against Mississippi.

Boston College has suspended activities for its men’s and women’s swimming and diving program after some team members tested positive for the coronavirus.

School spokesman Jason Baum says in an email that the athletes who tested positive are in isolation. He declined to say how many team members had tested positive and whether they were on the men’s or women’s team.

As of Thursday, there were 68 undergraduates in isolation, including 28 in isolation housing and 40 recovering at home. Fifteen students have recovered from the virus.

The president of Italian soccer club Napoli has tested positive for the coronavirus.

De Laurentiis attended a Serie A meeting in Milan on Wednesday that included representatives of each of the Italian league’s 20 clubs. He was also in contact with Napoli’s players and staff recently during the team’s preseason training camp in Castel di Sangro.

It wasn’t immediately clear if Napoli’s entire squad would be placed in isolation as a precautionary measure.

Napoli’s opening Serie A match is at Parma in 10 days and the team is scheduled to play Pescara and Sporting Lisbon in preseason friendlies on Friday and Sunday.