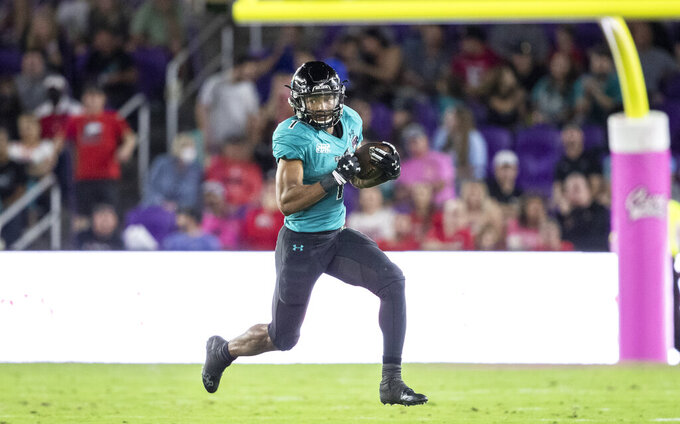 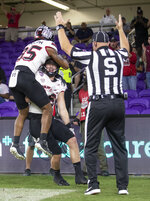 ORLANDO, Fla. (AP) — Grayson McCall threw four touchdown passes and Coastal Carolina held off Northern Illinois 47-41 in the Cure Bowl on Friday night, with the game ending with the Huskies at the Chanticleers 4.

McCall was 22 for 30 for 315 yards, and Braydon Bennett ran for 108 yards and two touchdowns on six carries to help Coastal Carolina (11-1) win 11 games for the second consecutive year. Bennett also caught four passes for 47 yards and a TD.

“He just operates, he's a smooth operator,” Coastal Carolina coach Jamey Chadwell said about McCall. “As a coach, if he misses a play, you're like, ‘What in the world is wrong with him' because he makes so many good one's."

Chadwell said while there is speculation about McCall's future, “we're confident that he loves Coastal and he's going to be here with us and finish out his career.”

It was also Coastal Carolina's first bowl victory. The Chanticleers lost in their first bowl appearance last year, 37-34 in overtime to Liberty.

“Pretty cool,” McCall said. “Definitely a team effort. I don't think I played by best game but but all my teammates propelled me forward.”

“Couldn't be more proud of their fight,” NIU coach Thomas Hammock said. “This could be a launching pad for us into the 2022 season.”

NIU’s roster has just seven seniors, and includes 71 players who graduated from high school in 2020 or 2021. The Huskies are the first team in FBS history to win its conference championship game one season after going winless (0-6).

Lombardi also had picked up 66 yards including a touchdown on eight carries.

After Northern Illinois wide receiver Trayvon Rudolph was stopped for no gain on a fourth-and-1 run at the Huskies 34, McCall threw a shovel pass from the option to Bennett for a TD on the next play. He then connected with Isaiah Likely on a two-point conversion to make it 47-41 with 6:40 left.

NIU converted 4 of 5 fourth-down plays in the game and ended the season successful of 26 of 31 attempts.

Northern Illinois got the ball back at its own 13 with 2 1/2 minutes to play. Lombardi hit Miles Joiner for a 4-yard gain on fourth down to the Coastal Carolina 4 with 2 seconds remaining, but the Huskies couldn't off another play.

Likely’s second touchdown reception got Coastal Carolina within two at 41-39 with nine minutes left, but McCall’s threw an incomplete pass on the two-point try.

Northern Illinois led 24-19 at the half as both teams scored on their first four possessions. NIU’s fifth and final possession started with a second left following a kickoff.

McCall passed for 164 yards and a TD during the opening half, while Lombardi threw for just 23 yards but had scoring strikes of 5- and 12-yards.

A special pink football was brought into the stadium by U.S. military paratroopers during a pregame ceremony. The NCAA approved the use of a football with pink laces for the opening kickoff. It was the first approval of its kind by the NCAA.

Northern Illinois: Hammock said around 20-to-25 of his players were impacted by flulike symptoms over the last few days.