Miami, FSU to meet in matchup of teams badly needing a spark 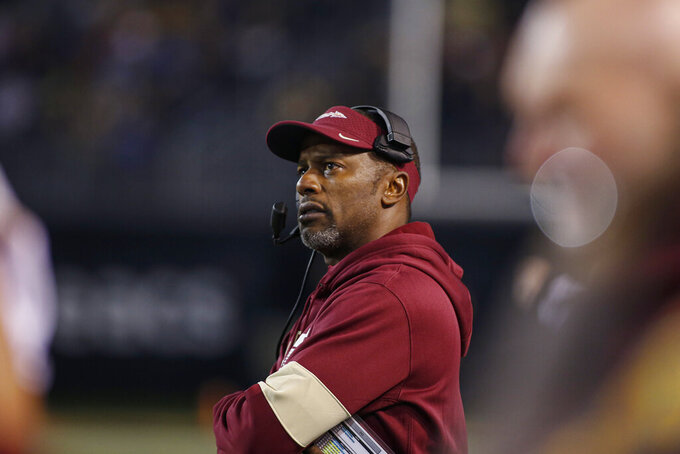 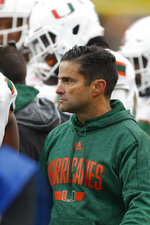 CORAL GABLES, Fla. (AP) — The year was 1975. Bobby Bowden was a year away from arriving at Florida State. Howard Schnellenberger was four years from taking over at Miami. Both programs were a long way from becoming perennial national championship contenders.

It was a long time ago.

It also was the last time — excluding season-openers — that Miami and Florida State played with neither team having a winning record.

That is, until Saturday. When the Hurricanes travel to Tallahassee to visit the Seminoles, both teams will enter with 4-4 records. The 1975 game had a 1-6 Miami team facing a 2-7 Florida State squad, and all 38 of the meetings that weren't Week 1 for somebody since have featured at least one team on the right side of the .500 mark.

"It's Florida State week, which always creates a little bit of a different atmosphere in the building, a little different sense of urgency," said Miami coach Manny Diaz — a Florida State graduate. "It's one of those games that you come to Miami to play in, to coach in. It's a legacy game, a game that you'll remember. You'll always be asked what your record is against Florida State while you're here at Miami."

This game used to decide who plays for national titles. The teams played 22 times from 1985 through 2005, and at least one team was ranked 10th or better in the Top 25 in all 22 of those meetings. On 13 occasions in that stretch, both were No. 10 or better.

In the 14 meetings since, including the one coming Saturday, 10 have seen one of the two teams enter unranked. Of those, four — including this one — has neither team ranked. Forget this game deciding a spot in the College Football Playoff. This might decide who goes to Shreveport or El Paso for a bowl game, and the loser will be in serious danger of not making a bowl at all.

"You've got to stay locked in to get it done," Florida State coach Willie Taggart said. "That's what it's going to require to win a game like this. The rivalry is the rivalry; it's always going to be big-time. We don't like each other, and that's just the way it is."

The programs combined for eight national titles — five for Miami, three for Florida State — in a span of 31 seasons from 1983 through 2013. Only two years ago, the Hurricanes had climbed as high as No. 2 in the AP Top 25; the Seminoles started the 2017 season at No. 3 in the rankings.

This season, barring some sort of miraculous season-saving rally, Florida State will not spend a single week ranked in the AP poll — ending a 42-year streak of having at least one appearance there. Florida State won the Orange Bowl in 2016, and has gone 16-17 since. Miami started 10-0 in 2017, and has gone 11-13 since.

"They're in Year 2. We're in Year 1," said Diaz, in his first season as Miami's coach. "I think we're both kind of waiting for that kick-start to get things going."

Saturday could provide that spark.

Florida State has led in seven of its eight games; the exception was a 45-14 rout against Clemson. The Seminoles blew a 24-6 lead against Boise State, a 24-17 fourth-quarter lead against Virginia and a 20-19 fourth-quarter lead two weeks ago against Wake Forest. All four of Miami's losses have come by seven points or less, and missed short kicks have played a role in all of them. The Hurricanes feel like they could easily be much better than 4-4, and Florida State feels the same way about its season.

"You can throw the records out," Taggart said.

Diaz watched these games as a Hurricanes fan when he was a kid in a seat at the Orange Bowl, then as an FSU student, then a member of FSU's staff, then as an opposing coach. He was on the N.C. State staff when the Wolfpack became the first ACC team to win a league game at Doak Campbell Stadium, 34-28 on Nov. 10, 2011.

Fittingly, that day was FSU's homecoming game. For Diaz, it was a happy one. He hopes Saturday is as well.

"It's Miami-Florida State," Diaz said. "This has been a game since I was ye big. This has been like a holiday for me. Doesn't matter where I went to school. This is 'Canes and 'Noles. This is about as exciting as it gets for me."