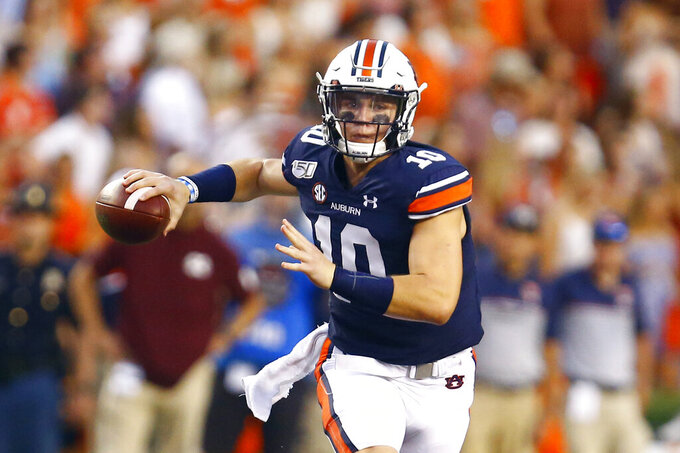 AUBURN, Ala. (AP) — After its defense led the way through the first four weeks, Auburn made a statement on the other side of the ball Saturday night.

Seth Williams had eight receptions for 161 yards and two touchdowns, JaTarvious Whitlow ran for three scores and Bo Nix had his best game in an Auburn uniform in the No. 7 Tigers' 56-23 victory over Mississippi State in Jordan-Hare Stadium.

Whitlow galloped for a 30-yard score on Auburn's first play. After the Tigers stifled Tommy Stevens and the Miss State offense for minus-22 yards on their first two possessions, Nix and receiver Anthony Schwartz added red-zone rushing touchdowns for a 21-0 lead.

"To come out and spot them 21 before the band even gets in their seats, you don't give yourself a chance," Bulldogs coach Joe Moorhead said.

Save for a lost fumble by Williams with 4:30 left in the second quarter, Auburn scored a touchdown on every possession in the first half. Whitlow found the end zone on a pair of 3-yard runs in the second quarter, and Nix dropped a 39-yard pass over Williams' shoulder for the score with 12 seconds until halftime.

Auburn's 42 first-half points marked its most in an SEC half since scoring the same against Vanderbilt in 1990.

Nix led Auburn down the field out of the locker room, too, capping a four-play, 75-yard drive with a 32-yard touchdown pass to Williams.

The Tigers' first punt came with 5:29 remaining in the third quarter.

"We're back to being an Auburn offense," Williams said. "This is what Auburn is about — fast-paced and scoring touchdowns. That's what (Gus) Malzahn likes to do, so that's what we're doing."

The true freshman Nix emphatically set a season high for passing yards with 335, while Williams' 161 receiving yards are the most by an Auburn player since Sammie Coates had 206 yards against Alabama in 2014.

The senior Penn State transfer Stevens earned the nod at quarterback for the Bulldogs (3-2, 1-1), but true freshman Garrett Shrader took over in the first quarter after Stevens sustained an injury on a big hit. Shrader instantly catalyzed the Bulldog offense on its first scoring drive of the night.

Malzahn said postgame he prepared his team to see both quarterbacks.

Bulldogs tailback Kylin Hill, who entered the contest leading the SEC in rushing, was held to 45 yards on 17 carries.

Shrader finished 12-of-23 passing for 209 yards and two touchdowns, and led the team in rushing with 89 yards. He added a rushing touchdown with 50 seconds remaining.

Auburn: The Tigers' offense had unsurprisingly leaned on its potent rushing attack through four games. But on Saturday, Nix took full command, accounting for 391 total yards and three touchdowns. His deep-ball accuracy also looked improved from last week, when he overshot a trio of would-be touchdown passes.

Mississippi State: Shrader sparked the Bulldogs offense at times and looks to be a formidable dual-threat weapon moving forward. Injury may have played a factor in Stevens' departure from the game, but Miss State's offense looked more comfortable with Shrader under center.

Auburn: The Tigers are headed for a probable Top 10 tilt with No. 9 Florida next Saturday in The Swamp.

Mississippi State: The Bulldogs have an off week before they travel to Tennessee on Oct. 12.

By Tim Reynolds 45 minutes ago
By Ralph D. Russo an hour ago
By Dan Greenspan 13 hrs ago
By Mark Long 16 hrs ago
By Joe Reedy 17 hrs ago