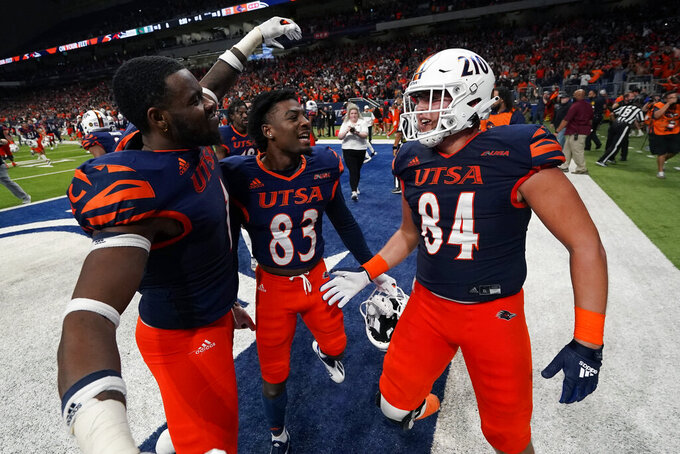 DENTON, Texas (AP) — UTSA coach Jeff Traylor understands the timing of the question about what it would mean for the 15th-ranked Roadrunners to complete an undefeated regular season.

With 11 wins down and one to go after a late escape last week, Traylor still isn't quite ready to answer that.

“I would rather reflect when the season is over. I am going to try to stay true to my culture pillar and win the day today," Traylor said. “Hopefully, if the Lord is willing, if you ask me that question after the game on Saturday, I can answer it appropriately."

A week before they will host the Conference USA championship game, the Roadrunners (11-0, 7-0 C-USA, CFP No. 22) play their regular-season finale Saturday on the road against a North Texas team (5-6, 4-3) still with a chance to get bowl eligible.

“It’s an important game for all of us,” UNT coach Seth Littrell said.

Top-ranked Georgia and No. 4 Cincinnati, another non-Power Five team, are the only other undefeated FBS teams going into the final weekend of the regular season.

The Roadrunners had to go 77 yards on seven plays over 63 seconds without a timeout last Saturday to stay undefeated. Frank Harris threw a 1-yard TD pass to Oscar Cardenas with 3 seconds left in their regular-season home finale to beat UAB 34-31. It was their fifth victory by a touchdown or less.

UNT has won four games in a row since a 1-6 start that raised questions about sixth-year coach Littrell's future. The Mean Green still have to win their home finale for bowl eligibility after taking full advantage of their schedule the past month. Their winning streak has come against the last-place teams from both C-USA divisions, as well as two other teams below them in the West Division.

“I know they have a lot to be playing for being undefeated, and looking to go play in the conference championship and compete for one,” said Littrell, who is 36-37 as UNT's coach. "We have a lot on the line, too, because one more win gets us bowl eligible and gives us an opportunity to win a bowl game. That’ll only make it more special.”

North Texas is the top rushing team in Conference USA and fourth nationally at 237 yards a game, led by DeAndre Torrey’s 100.6 yards per game. UTSA is the league’s best rushing defense, and 10th nationally, allowing 101.7 yards per game. Only six rushing TDs have been scored this season against the Roadrunners.

UTSA also has a standout tailback in junior Sincere McCormick, the school’s career rushing leader with 3,665 yards and 31 rushing TDs.

UTSA is the first Top 25 opponent to visit Apogee Stadium, the campus facility that opened 10 years ago. The Mean Green are 1-47 all-time against ranked opponents, and the lone victory was 14-9 over No. 20 San Diego State on Nov. 2, 1974, at old Fouts Field.

The Roadrunners won’t know until after they are finished at UNT who they will play in the Conference USA title game. Western Kentucky and Marshall, the top two teams in the East Division, play in West Virginia, with the winner advancing to the championship game. Kickoff there is about 90 minutes after the start of the UTSA game in North Texas.

None of that really matters to Traylor, even with the title game pending next Friday night.