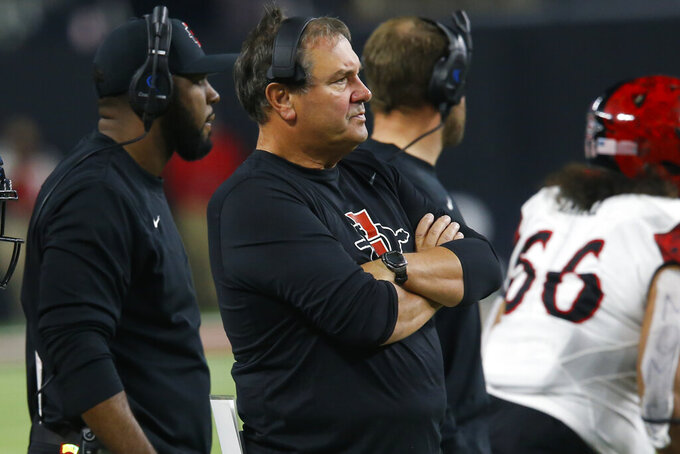 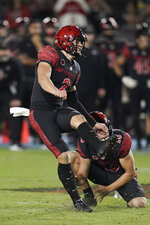 SAN DIEGO (AP) — While people around the country jostle for Black Friday deals or begin to pull out of Thanksgiving food comas, Boise State and No. 22 San Diego State will get an early wake-up call for a showdown at a soccer pitch in suburban Los Angeles that will help decide the Mountain West Conference’s division titles.

San Diego State (10-1, 6-1, No. 21 CFP) heads into the 9 a.m. kickoff controlling its own destiny in the West, needing just a victory over the Broncos (7-4, 5-2) to clinch the division. Fresno State beat San Jose State on Thursday to stay alive in the West Division. If SDSU loses to the Broncos, Fresno State will win the division based on its 30-20 win over the Aztecs on Oct. 30.

If the Aztecs win Friday morning, they’ll be right back at their temporary home, Dignity Health Sports Park in Carson, for the MWC title game on Dec. 4.

Boise State’s road to the Mountain Division crown is a more complicated. The Broncos are tied with Air Force and Utah State but don’t control their own destiny.

The Aztecs go from an 8:30 p.m. kickoff last Friday in Las Vegas to a 9 a.m. kickoff 116 miles from campus at the home of Major League Soccer's LA Galaxy. The soccer pitch has been their temporary home stadium for two seasons while 35,000-seat Aztec Stadium is rising in San Diego’s Mission Valley, the first phase of a campus expansion on the site where 70,000-seat San Diego/Jack Murphy/Qualcomm/SDCCU Stadium once stood.

“I think our kids are excited about it,” coach Brady Hoke said of the early kickoff. “I think they don’t care when we play. They just know that they’ve got a job to do, we all do, and to go out and play. I do know that my father-in-law, who’s 90, and my mom, who’s 89, they’ll like the time the game’s on at noon back in Ohio, so I feel good for them.”

The Aztecs practiced Wednesday morning and had a morning walkthrough on Thursday before heading to Carson. Friday’s pregame meal is scheduled for 5:30 a.m.

“We’re probably going to have to wake up early and our pregame meal is probably going to be at breakfast time, which is our spaghetti and chicken and stuff like that, will probably be for breakfast,” linebacker Caden McDonald said. “But this team will be doing a great job. We’re all adjusting to the morning stuff anyway. So we’re excited to play at 9 a.m. It’s on CBS, it’s going to be an awesome atmosphere, everybody’s going to be watching, we’re all excited about it.”

San Diego State junior Diego State punter/placekicker Matt Araiza remains the Aztecs’ most potent threat after repeatedly forcing opponents into bad field position with his booming left foot. Araiza, a finalist for the Ray Guy Award, leads the FBS in punt average at 51.9 yards and is on pace to break the NCAA FBS record. His stats are astounding. He has an NCAA-record 36 punts that have traveled at least 50 yards, an NCAA-record 17 punts that have gone 60 yards and 34 punts downed inside the 20-yard line. Araiza has six punts of at least 70 yards, including the longest of 86 yards. He also has two games with at least an 80-yard punt and a 50-yard field goal.

Araiza was named Mountain West Special Teams Player of the Week for the fourth time after averaging 47.5 yards on six punts in a win at UNLV and not allowing a return yard. Five of those punts were downed inside the 16-yard line. UNLV’s starting field position following the six punts was the 12, 15, 8, 6, 36 and 1.

Bachmeier is from Murrieta, which is about 75 miles from Carson.

San Diego State senior quarterback Lucas Johnson is coming off perhaps his best game. He completed 18 of 24 passes for 192 yards and three touchdowns, with one interception and a career-high 175.12 passer rating in a 28-20 win at UNLV. In his last three games, Johnson is 51 of 74 (68.9%) for 467 yards and four touchdowns, with one interception and a rating of 137.06.

The series is tied 3-3, making the Aztecs the only MWC team the Broncos don’t have a winning record against. The Broncos are 2-1 when playing the Aztecs on the road. They knocked off SDSU 31-14 on Oct. 14, 2017, in the only previous meeting in which the Aztecs were ranked. SDSU returned the favor in 2018, winning 19-13 in Boise.