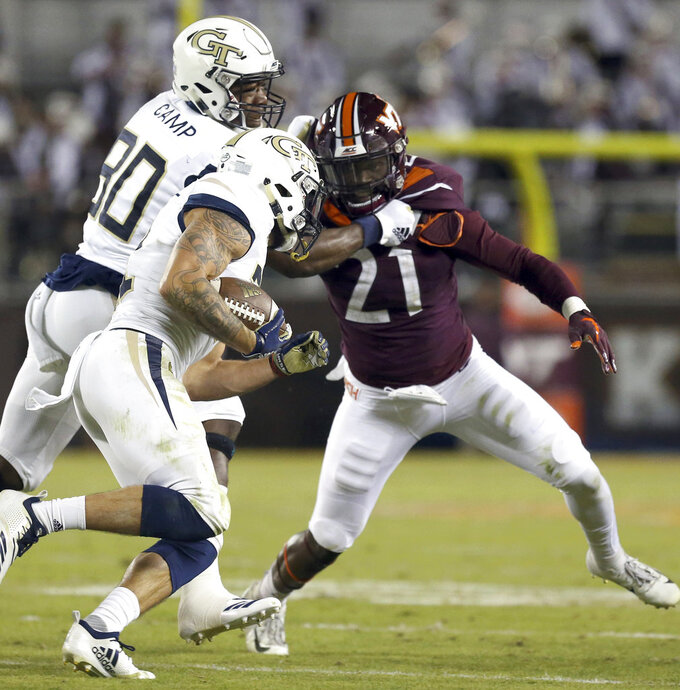 Things to watch in the Atlantic Coast Conference in Week 10:

No. 24 Boston College at Virginia Tech. The Eagles' return to the national rankings comes in one of only two games matching ACC teams with winning records. Boston College (6-2, 3-1) enters having won two in a row and is coming off an emotional victory over Miami . But the Eagles have won at Lane Stadium only once in the past decade. But Georgia Tech showed that Virginia Tech (4-3, 3-1) is beatable on its home field. The Yellow Jackets rushed for 465 yards in routing the Hokies , and now it's AJ Dillon's turn to try to put up big numbers against Bud Foster's defense.

Miami pass defense vs. Duke pass offense. The Hurricanes (5-3, 2-2) lead the conference against the pass, allowing an average of 140.8 yards through the air, but showed some vulnerability last week when they allowed BC to throw for 210 yards and complete nearly 57 percent of its passes. Next up is a Duke offense that had no trouble moving the ball against Pittsburgh, rolling up 619 total yards — including 396 yards passing — in a 54-45 loss at Pittsburgh that marked the second straight loss for the Blue Devils (5-3, 1-3).

ACC schools are collectively on pace for the highest-scoring season in league history. The 14 schools are averaging 32.3 points per game, about 1½ ahead of the pace in 2016, when the ACC teams averaged 30.7 points. It helps to have two of the highest-scoring teams in league history — Clemson's 44.13-point average is the third-highest while Syracuse is the fourth-highest at 43.63 points per game.

Maybe North Carolina can keep it close as a 4½-point home underdog to Georgia Tech. It's been another rough season for the Tar Heels (1-6, 1-4), who at least have been competitive lately. Their last three losses have come by a combined 16 points, including three-point losses to Virginia Tech and in overtime at Syracuse.