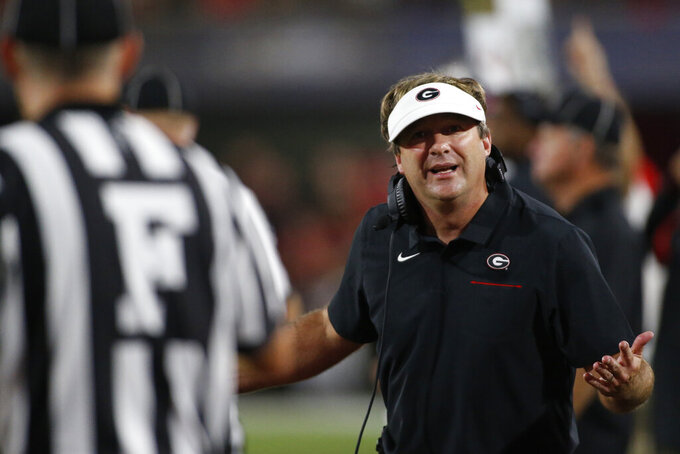 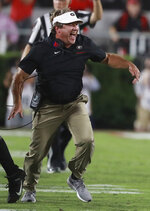 “They're on the brink of something special,” Smart said.

Tennessee hired Pruitt with the hope he eventually could match what Smart is doing at Georgia, even though that figured to be a major challenge.

Pruitt took over a Tennessee program coming off a 4-8 season in which it went winless in SEC competition. Georgia won at least 10 games in four of the five seasons preceding Smart’s arrival.

“Jeremy Pruitt is not a bad football coach,” SEC Network analyst and former Auburn coach Gene Chizik said. “He inherited a situation that was more difficult than the one Kirby inherited. That’s the bottom line.”

After going 5-7 in Pruitt’s debut season last year, Tennessee opened the 2019 season with a stunning loss to 26-point underdog Georgia State and hasn’t recovered. In the meantime, Smart owns a 36-10 record at Georgia as the Bulldogs chase their third straight SEC East title.

“I totally believe in Coach Pruitt and the job that he’s doing,” Fulmer said this week on the “Vol Calls” radio show. “He’s a leader. He’s a recruiter. He’s a hard worker. He’s tough-minded. He confronts the issues that we have.”

One major difference between the two teams is at quarterback.

Georgia’s Jake Fromm is a third-year starter who hasn’t thrown an interception all season. Tennessee’s Jarrett Guarantano has struggled enough that he was briefly benched in favor of true freshman Brian Maurer during a 34-3 loss to No. 10 Florida two weeks ago.

Fromm also has plenty of help. Georgia enters Saturday’s game as a 24 ½-point favorite and leads the SEC in rushing offense and run defense . Georgia and No. 14 Iowa are the only Football Bowl Subdivision teams that haven’t allowed a touchdown run this season.

“It’s probably the best Georgia team that I can ever remember at this point in time in the season,” Pruitt said.

Pruitt believes his team also is making progress. Pruitt said last week Tennessee was “100 times better” than it was at this time a year ago, even though that’s not reflected in the Vols’ record.

Smart agrees that Tennessee has improved.

“They were thinner at some positions last year,” Smart said. “They've got more guys. They're rolling and playing more guys. They're playing really hard and they play really physical. You look at the games they've played this year, they've had some self-inflicted wounds. Otherwise, they're winning or in those games.’’

Some other things to know heading into Saturday’s Georgia-Tennessee game.

The Georgia-Tennessee series is tied 23-23-2 heading into Saturday. A Georgia victory would enable the Bulldogs to lead the series for the first time since the early 1990s.

Tennessee’s Brent Cimaglia is 9 of 9 and Georgia’s Rodrigo Blankenship is 8 of 8 on field-goal attempts this season.

Georgia offensive guard Cade Mays is a Knoxville, Tennessee, native whose father played for the Vols. Mays verbally committed to Tennessee before signing with Georgia instead. His younger brother Cooper is a high school senior who plans to play for Tennessee.

This also will be a homecoming for Georgia tight end Eli Wolf, a graduate transfer from Tennessee.

Tennessee’s Darrell Taylor recorded three sacks against Georgia last season but could have trouble making the same kind of impact Saturday. Georgia has allowed just one sack all season.