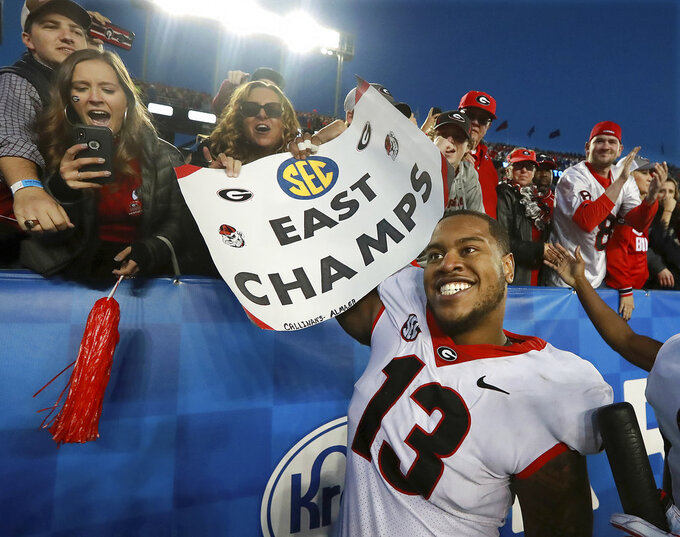 Georgia defensive end Jonathan Ledbetter celebrates a 34-17 victory over Kentucky with the fans to win the SEC East in a NCAA college football game on Saturday, Nov. 3, 2018, in Lexington, Ky. (Curtis Compton/Atlanta Journal-Constitution via AP) 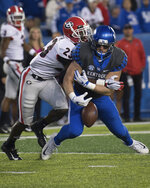 LEXINGTON, Ky. (AP) — Georgia believed it had a point to prove.

"I think people had started doubting us," Swift said. "We just tried to silence the critics."

Swift had an 83-yard breakaway in the third quarter that gave Georgia (8-1, 6-1, No. 6 College Football Playoff) a 28-3 lead. He also had a nifty 20-yard scoring run in the second period when the game was close.

"It's definitely a point proven," Holyfield said. "There was a lot of talk about them.... and not enough talk about us."

Kentucky (7-2, 5-2, No. 9 CFP) has never reached the SEC championship game, which has been played every year since 1992. The Wildcats entered the weekend with the nation's top scoring defense and hadn't allowed anyone to exceed 20 points all year, but they couldn't slow down Georgia's tandem of Swift and Holyfield.

Before Saturday's game, the only player to rush for as many as 75 yards against Kentucky was Texas A&M's Trayveon Williams, who ran for 138 yards in a 20-14 overtime victory over the Wildcats. Swift and Holyfield were both over the 100-yard mark by the end of the third quarter.

"They did a good job," Kentucky coach Mark Stoops said. "They moved us. They made us miss. There's a lot of things we could have done better, but a lot of that has to do with them."

Kentucky dominated time of possession through the first 1 1/2 quarters, but still trailed 7-3. That's when Swift started to give the Bulldogs some breathing room.

With Georgia facing second-and-17, Swift made a move around a defender at the line of scrimmage, made another move between two Wildcats about five yards downfield and shed a tackle inside the 5 to complete a remarkable 20-yard touchdown run.

On Georgia's next series, Swift raced through a big hole on the left side of the line and didn't appear to get touched on his 83-yard sprint to the end zone. Before that play, Kentucky hadn't allowed a run from scrimmage longer than 34 yards all season.

"Give our kids a lot of credit because their backs were against the wall kind of two weeks in a row and they came out fighting," Georgia coach Kirby Smart said. "They came out scratching and clawing."

Georgia: The Bulldogs' fearsome rushing attack was the difference in the game, but Georgia's pass rush also started showing signs of life. Georgia had four sacks Saturday after entering the weekend with an SEC-low 10 sacks all season. Georgia now won't have to play another true road game all season. The Bulldogs have home games with Auburn, Massachusetts and Georgia Tech the next three weeks.

Kentucky: The Wildcats reached Georgia territory on three straight first-half possessions and only had three points to show for it. That proved critical when a defense that had carried Kentucky all season couldn't slow down Georgia's rushing attack. Kentucky got more bad news in the third quarter when safety Darius West drew a targeting penalty that will knock him out for the first half of its game next week at Tennessee.

Snell ran for 73 yards and one touchdown for the Wildcats to increase his season total to 1,008, becoming the first Kentucky player to rush for 1,000 yards in three seasons. But he needed 20 carries to reach that total, an average of 3.65 yards per attempt.

"People doubt us and say we can't do this and we can't do that," Georgia defensive end Jonathan Ledbetter said. "We'll just do what we do. When they realize that's what we do, we'll just keep pushing."

Georgia may need some help to get up to the top five, though this victory likely assures the Bulldogs remain in control of their postseason fate. Kentucky figures to drop a few spots in the Top 25 and likely will leave the top 10 in the CFP rankings.