Pat Fitzgerald: Badgers' Taylor would get my Heisman vote 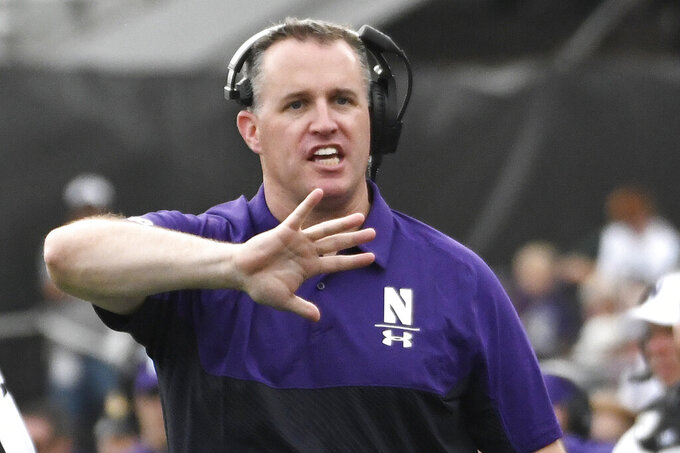 Northwestern head coach Pat Fitzgerald gestures to the officials during the second half of an NCAA college football game against Michigan State, Saturday, Sept. 21, 2019, in Evanston, Ill. (AP Photo/David Banks)

In fact, Northwestern's coach said he feels Wisconsin's All-American running back is the best player in the country.

"If I had a Heisman vote right now, he's getting my vote," Fitzgerald said. "He's playing outstanding, absolutely outstanding, football. ... JT's been a great player since the minute he walked into this league, and he's playing at as high of a level as any running back that I've seen in my time here."

Taylor was named the Big Ten Offensive Player of the Week for his efforts against Michigan last week. Taylor scored twice and became the first Wisconsin player in history to rush for at least 200 yards (203) against the Wolverines.

Taylor has rushed for at least 100 yards in 25 of his 30 career games. None of those 25 games were against the Wildcats, who are coming off a loss to Michigan State.

Taylor has faced Northwestern twice in his career and has been held to a total of 126 yards on 30 carries, just 4.2 yards per carry and 63 per game. He had just 46 yards on 11 carries and two fumbles in a 31-17 loss on the road to the Wildcats last season.

"Those guys play well off blocks," Taylor said of the Northwestern defenders. "They fill gaps really well and they play with length."

Wisconsin gave up its first touchdown of the year last week to Michigan after beginning the season with over 160 straight scoreless minutes. The Badgers' defense is giving up an average of just 27 yards rushing per game, which leads the nation. Wisconsin also ranks No. 1 nationally in scoring defense (4.7 points per game), total defense (171.3 yards per game) and pass efficiency defense (75.7).

The Wildcats are staring at a potential 1-3 record for the second straight season. A year ago, Northwestern went on a run to the Big Ten West title, its first trip to the conference championship game and a victory in the Holiday Bowl. But starting slow is a trend they would like to end.

Northwestern dominated Wisconsin's Jack Coan last season in what was his first career start. But the junior quarterback has won five consecutive starts and is second in the Big Ten in pass efficiency (176.8) this season. Coan and Taylor have combined for 145 points in their first three games, more than three times what Northwestern has scored as a team in the same amount of minutes.

Quarterback Hunter Johnson came to Northwestern with plenty of hype after transferring from Clemson. But he's off to a shaky start. Johnson struggled in a season-opening loss at Stanford. He rebounded in a win over UNLV, only to get pulled in the fourth quarter last week in favor of Aidan Smith after going 15 of 26 for 88 yards and an interception.

He then had a rather one-sided conversation with his coach after he got pulled.

"Well, I didn't give him a chance to have a response," Fitzgerald said. "I went up directly to him in the locker room and said the decision to put Aidan in was mine. We needed a spark, we had sputtered through the third quarter. ... I'm not just going to sit idle. We have to execute. And if we don't execute, we have to have competition. Hunter knows he's got to be better. He's the first guy to admit it."

Johnson is just 33 of 68 for 308 yards and has more interceptions (four) than touchdowns (one).

"I'm going to keep preparing every day, prepare my butt off to be ready for every game," he said. "Nothing really changes. I've got to clean some things up, that's for sure."

"When you play this team, in general, you're going to have to earn everything that you get," Wisconsin coach Paul Chryst said. "They're tough, they're physical; you've got to work for it and you've got to earn it."