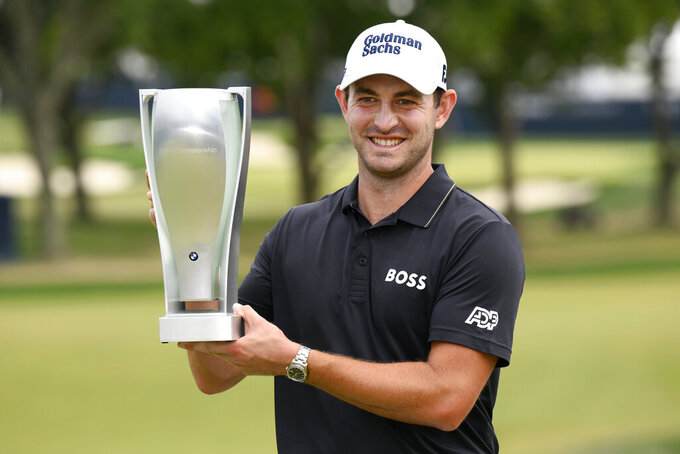 Notes: The final event of the season determines which 30 players win the FedEx Cup and its $18 million prize. Scottie Scheffler is the No. 1 seed and will start with a two-shot lead over Patrick Cantlay. Will Zalatoris (7 under) is third, followed by Xander Schauffele (6 under) and Sam Burns (5 under). The next five are at 4 under. ... Two rookies, Cameron Young and Sahith Theegala, reached the Tour Championship without having won. ... Cantlay became the first player to defend his title in a FedEx Cup playoff event at the BMW Championship. ... Scott Stallings reached the Tour Championship for the first time in his 12th season on the PGA Tour. He was runner-up last week to Cantlay. He is among 10 players at East Lake for the first time. ... The first prize is $17 million in cash and $1 million deferred. ... Aaron Wise is the 30th seed. He is in the field because Talor Gooch, who was 29th, has been suspended since June for joining Saudi-funded LIV Golf. ... No one has ever won the FedEx Cup in consecutive years. Tiger Woods won in 2007 and 2009. He was recovering from knee surgery in 2008. Rory McIlroy also has won it twice.

Next tournament: Fortinet Championship on Sept. 15-18.

Notes: The Canadian Women's Open returns for the first time since 2019 because of travel restrictions related to the COVID-19 pandemic. ... Nelly Korda is coming off her first win of the year in the Aramco Series on the Ladies European Tour where she rallied from seven shots behind against her sister Jessica. ... The field is one of the strongest of the year, with nine of the top 10 in the world ranking. The only one not in the field is Hyo-Joo Kim. ... Next week starts a stretch of six domestic tournaments, starting with back-to-back weeks in Ohio. ... Ko set the tournament record last year at Magna Golf Club outside Toronto at 26-under 262. The previous mark was 265. ... The Canadian Women's Open has been part of the LPGA Tour schedule since 2001. It dates to 1973 as La Canadienne and became a major championship called the du Maurier Classic until tobacco sponsorship ended in Canada. The last time it was a major was in 2000 and won by Meg Mallon. ... Lydia Ko is a three-time winner of the tournament, her first victory in 2012 as an amateur.

Notes: Boise Open winner Will Gordon and Phillip Knowles, who lost in a playoff, have already earned enough points to finish the Korn Ferry Tour Finals in the top 25 and earn PGA Tour cards for next season. MJ Daffue also lost in the playoff. He already had his card from being in the top 25 in the regular season. ... Knowles wasn't even eligible for the finals until a top 10 in the final event of the regular season moved him to No. 67. ... Thomas Detry of Belgium and Dean Burmester of South Africa tied for fourth and need only one more decent finish this week to lock up a tour card. ... Among PGA Tour winners who missed the cut in the opening event were Bill Haas, David Lingmerth and Wesley Bryan. ... The Scarlet is the home course of the Ohio State Buckeyes that one of its alumni, Jack Nicklaus, has refurbished over the years. ... Two tournaments remain in the Korn Ferry Tour Finals for players to earn their cards.

Notes: The European tour goes to arguably its most scenic venue. Crans-sur-Sierre is in the Alps overlooking the Rhone Valley. ... Adrian Meronk, the first Polish winner on the European tour, is No. 59 in the world as he tries to break into the top 50. ... Miguel Angel Jimenez is playing the European Masters just two weeks after he won the Boeing Classic on the PGA Tour Champions. ... Rory Sabbatini is playing for the second straight week on the European tour. The South African-born Slovakian moved up to No. 25 in career PGA Tour money because of a LIV Golf player being suspended and will have a full card for next year. ... Ryan Fox is in the field and has a chance to make an impression on International captain Trevor Immelman as a pick for the Presidents Cup. The Kiwi is No. 48 in the world, the highest-ranked player in the field. ... The late Seve Ballesteros was a three-time winner of the European Masters.

Next week: Made in Himmerland.

Notes: Padraig Harrington is in the field and goes for his second straight win with hopes of cutting into Steven Alker's lead in the Charles Schwab Cup standings. ... Warwick Hills hosted the Buick Open on the PGA Tour from 1958 through 2009, when Tiger Woods won for the third time. ... Among Buick Open winners in PGA Tour Champions event are Jim Furyk, Rocco Mediate, Billy Mayfair, Tom Pernice Jr., Woody Austin and Larry Mize. ... Mize, the 1987 Masters champion, got in as an alternate when Dicky Pride withdrew. ... Vijay Singh also withdrew from the field. He is a three-time winner of the Buick Open. ... Furyk won his in his PGA Tour Champions debut in 2020. Furyk had turned 50 in May but the tour schedule was delayed because of the COVID-19 pandemic. ... By winning last week, Harrington joined Alker in going over $2 million for the season. The Irishman trails Alker by $415,178 in the Schwab Cup.