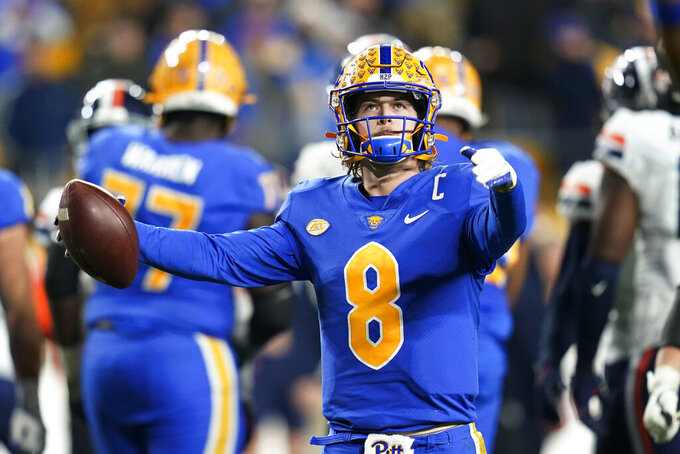 Pittsburgh quarterback Kenny Pickett (8) acknowledges fans as as time runs down in the team's win over Virginia in an NCAA college football game Saturday, Nov. 20, 2021, in Pittsburgh. (AP Photo/Keith Srakocic)

Line: Pitt by 2 1/2, according to FanDuel Sportsbook.

The Atlantic Coast Conference championship and the honor of officially ending Clemson's dominant six-year run as champs. The Tigers represented the ACC in the College Football Playoffs for six straight years, but this year's ACC champion won't be headed to the playoffs. However, the winner of this game will be attending a more prestigious bowl game than the loser.

Pitt QB Kenny Pickett vs. Wake Forest's secondary: Pickett threw for 40 touchdown passes this season, breaking Dan Marino’s school record of 37. That leaves him one shy of the ACC record set by Clemson’s Deshaun Watson, which was established over the course of a 15-game season in 2016. Pickett has thrown 79 career TD passes, tied with Marino for the most in school history. He faces a Wake Forest secondary that has been suspect as the season has gone along.

Pitt: WR Jordan Addison is producing at an All-America level. A Biletnikoff Award finalist, Addison leads the country with 17 touchdown catches. That is the most by a Pitt player since 2003 when Larry Fitzgerald had a school-record 22.

Wake Forest: QB Sam Hartman threw for 3,711 yards with 34 touchdowns and 10 interceptions this season. Hartman may be listed as a sophomore, but he's more experienced than you might think having already played in four different seasons for the Demon Deacons.

Wake Forest is 1-0 in the championship game, beating Georgia Tech 9-6 in a defensive struggle in 2006. ... Pitt previously played in the title game in 2018, losing to eventual College Football Playoff champion Clemson 42-10. ... Pitt won the only other matchup between the teams 34-13 in 2018. ... Since 2015, coach Pat Narduzzi has directed Pitt to 36 victories in ACC play, the third-highest win total during that span. Only Clemson (52) and Miami (37) have won more. ... After starting the season 9-0, Wake Forest has gone 2-2 since allowing 158 points during that span. The losses came to North Carolina and Clemson.