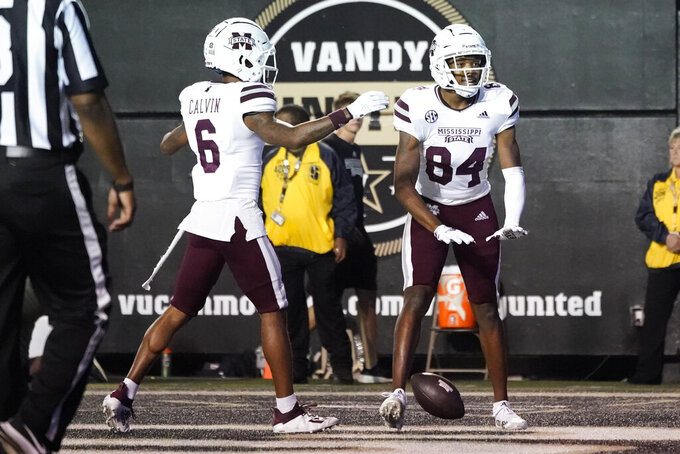 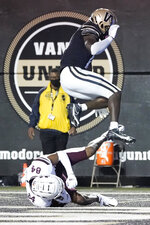 NASHVILLE, Tenn. (AP) — Will Rogers had a career day at quarterback for Mississippi State, but his coach Mike Leach was not overly satisfied.

Rogers threw a career-best four touchdowns, two to wide receiver Makai Polk, and Mississippi State was never challenged in a 45-6 Southeastern Conference win over Vanderbilt Saturday afternoon. Rogers, the SEC leader in passing yards with 360.3 yards, threw for 386 against the Commodores, completing 41 of 57 attempts. It was the fifth time he has thrown three or more touchdown passes in a game this season and the seventh time in his career.

“I thought Will was good overall,” Leach said. “Obviously, he had some sloppy play in the mix.

“What he did best was maintain his composure. He was ready for the next play or next series after something went wrong. I think that rubbed off on the offensive unit and our team to a degree,” Leach said.

Rogers threw for first-half touchdowns of 31 and nine yards to Polk, and to wide receiver Rufus Harvey for six yards. He added one more in the third quarter with a nine-yard completion to wide receiver Malik Heath.

The Bulldogs set the offensive pace for the afternoon scoring a touchdown on their first drive. Running back Jo’quavious Marks added a five-yard run in the fourth quarter. Chance Lovertich, replacing Rogers, threw a 28-yard touchdown pass to Rara Thomas with 51 seconds left in the game.

Few things went wrong for the Bulldogs on offense or defense, but Leach was particularly pleased with the way his team handled turnover and penalty situations.

“I thought we did a lot better job of fighting through adversity,” Leach said. “We did some really good stuff. If we stubbed our toe or made a mistake we did a good job of battling through that. The guys stayed locked into their jobs better rather than sitting and dwelling on something that didn’t work out our way. We have been fighting that for awhile.”

Vanderbilt settled for a pair of field goals with Joseph Bulovas hitting from 27 yards in the second quarter and from 41 in the third quarter.

“We are disappointed,” Vanderbilt coach Clark Lea said. “We have things we have to work on across the board. We are going to get back to work.”

Mississippi State: Leach’s Air Raid offense was back on track after the Alabama loss. The Bulldogs entered the Vanderbilt game averaging 24.7 points per game. The Bulldogs completed 47-of-64 attempts for a 72 percent success rate and 463 yards in the air.

Vanderbilt did manage to intercept Rogers two times. It was the Commodores fourth straight game with multiple interceptions, the first time they have accomplished the goal since 2011.

Vanderbilt: The Commodores offense struggled in the air and on the ground as Mike Wright started in place of injured Ken Seals for the second week in a row. In the second quarter Wright connected with wide receiver Devin Boddie for a 61-yard reception, the longest gain from scrimmage for the Commodores this season. Wright completed six of eight passes in the first half for 76 yards. In eight rushing attempts the Commodores had no yards at intermission.

Jeremy Moussa closed out the game for Vanderbilt and completed five-of-eight pass attempts for 24 yards.

Mississippi State will host Kentucky in an SEC game Oct. 30.

Vanderbilt plays the second game in their three-game SEC homestand against Missouri Oct. 30.