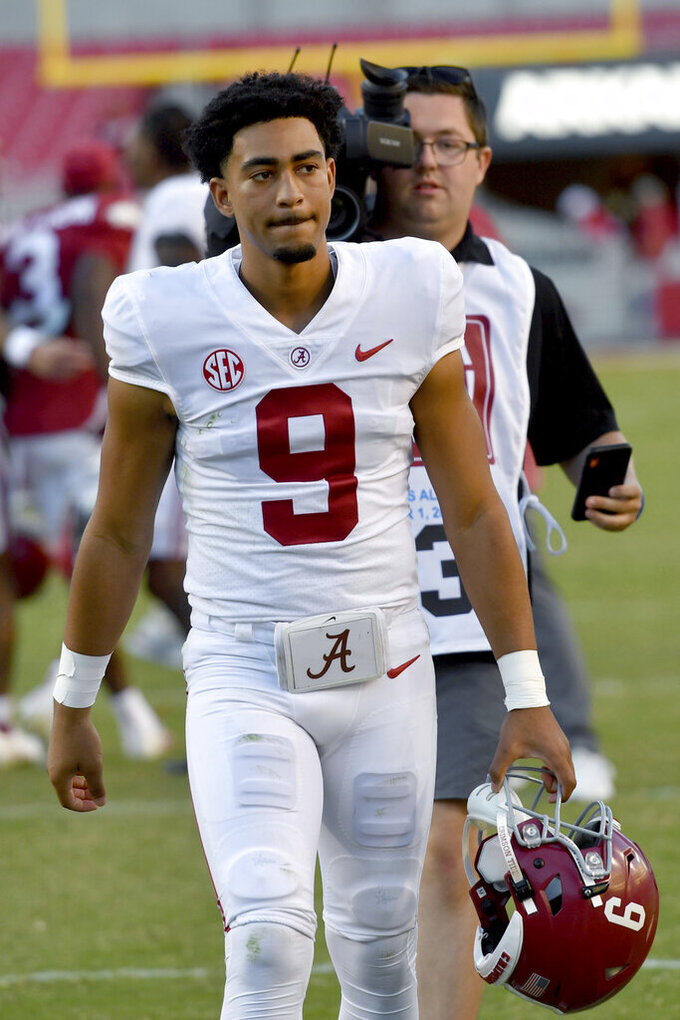 Alabama coach NIck Saban called Young day-to-day on Monday and said he didn't have any substantive update on the status of last season's Heisman Trophy winner. The top-ranked Crimson Tide face the Aggies, the only team to beat Alabama in the 2021 regular season, on Saturday night.

“Really, there’s no updates on Bryce,” Saban said. "You know, he’s got a little bit of a shoulder injury. It’s not a long-term type injury.

“He’s gonna be day-to-day when he can get back to throwing, and we’ll just have to evaluate it day to day. So I can’t tell you if that’s going to be today, tomorrow, or the next day.”

Saban spoke before practice, which is closed to the media. In fact, both quarterbacks are labeled as day to day by their coaches.

Texas A&M's Max Johnson sustained a hand injury late in last week’s loss to Mississippi State. Pushed on whether Johnson, who got the job after Haynes King was benched following two subpar starts, would start this week, Texas A&M’s Jimbo Fisher was cagey. “I don’t know,” he said. “We’ll go day-to-day ... what do you want me to do? Call Nick and tell him?”

Young's status especially is overshadowing the juicy offseason back and forth between Saban and Fisher that drew a reprimand for both from the Southeastern Conference. Saban called out Texas A&M a nd other schools while talking about the need for regulating NIL in college sports. Fisher shot back and called his former boss at LSU “a narcissist.”

If Young can't go, Alabama will turn to Jalen Milroe, a dual-threat quarterback who played most of the way in a 49-26 win at then-No. 20 Arkansas. Young landed on his right shoulder on a scramble, throwing the ball away on his way down. He didn't return.

Saban said that play was “a teaching moment” for his star quarterback, who could have just let himself be tackled or gotten rid of the ball earlier.

“But sometimes you’ve got to know when there’s no play to be made. And now it’s time to not put myself at risk.”

Young has passed for 1,202 yards and 14 touchdowns against three interceptions this season. He has also run for 154 yards and three scores.

Milroe is a redshirt freshman and former four-star recruit from Katy, Texas, about 85 miles from College Station.

Alabama switched gears with him in the game against Arkansas, relying more heavily on the running game. Milroe was only 4-of-9 passing for 65 yards but set up a fourth-quarter touchdown with a 77-yard run. He finished with 91 yards on six carries.

“Jalen did a great job stepping up, knowing what he needed to do, make plays for us to win,” tailback Jahmyr Gibbs said.

Alabama has had a package installed for Milroe, who was the nation's No. 4 dual-threat quarterback prospect out of high school, according to the 247Sports composite rankings.

Milroe, who has passed for 151 yards and rushed for 163 this season, got little action in four games last season before redshirting. He completed 3 of 7 passes for 41 yards and a touchdown while gaining another 57 on 15 rushes.

“I just know as a coach what we try to do to prepare him so that they feel like at least, psychologically, they’re in the right place to go out there and read things and make the right choices and decisions,” Saban said. “That’s why we practice. That’s why we give guys experience. We’ve been fortunate that Jalen got a pretty good bit of experience in these first few games.”

Gibbs ran for 202 yards, including touchdowns of 72 and 76 yards in the fourth quarter. The longest run came from Milroe, though.

Gibbs said he's never raced the Tide's backup quarterback but that Milroe did run against receiver Kendrick Law over the summer.

Added linebacker Will Anderson Jr.: “He is very hard to tackle. He can move really well, has great feet. He can escape the pocket.”

Saban said defensive end Justin Eboigbe, who missed the Arkansas game, has a neck injury and will see a specialist.

“We’re not going to allow him to play until we can get the exact, most expert, plan of action for him and his future,” Saban said.