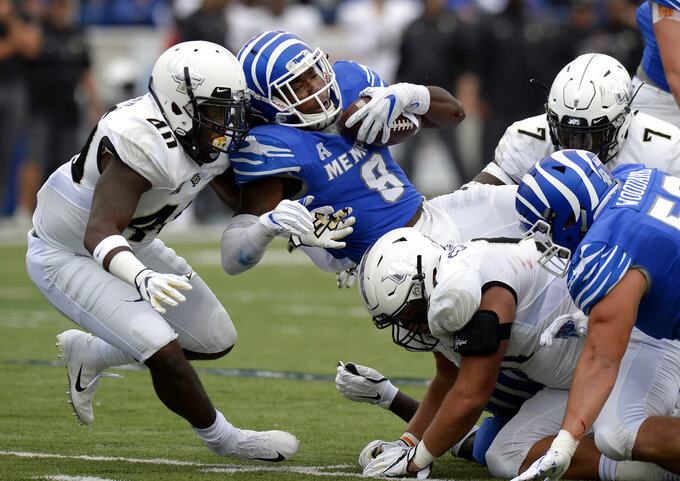 Memphis running back Darrell Henderson (8) runs for a first down as he is hit by Central Florida linebacker Eriq Gilyard (40) during the first half of an NCAA college football game Saturday, Oct. 13, 2018, in Memphis, Tenn. (AP Photo/Mark Zaleski)

Alabama leads two of the four major offensive categories, Darrell Henderson of Memphis has overtaken Wisconsin's Jonathan Taylor in rushing and Washington State's Gardner Minshew is the only quarterback averaging more than 400 yards pass per game as the college football season enters its second half.

The Crimson Tide have scored 50-plus points in five of their seven games and lead the nation with 53.6 per game. They also are averaging a nation-high 567 yards per game.

Henderson has used back-to-back games of 174 yards against Connecticut and 199 against Central Florida to pass Taylor for the rushing lead. He's averaging 161.9. Taylor, who had a season-low 101 yards against Michigan on Saturday, is second at 158.3.

New Mexico State's Jason Huntley had a national season-high 373 all-purpose yards against Louisiana-Lafayette. Huntley rushed for 85 yards, had 112 yards receiving and ran back five kicks for 176 yards, including an 87-yarder for a touchdown. His big game came in a 66-38 loss in which the Ragin' Cajuns had 759 total yards, the third-highest total by a team this season.

UAB matched Penn State for the longest pass play of the season when A.J. Erdely and Xavier Ubosi connected for a 95-yard touchdown in the second quarter against Rice.

A LEG UP, FINALLY

Alabama Skyler DeLong was called on to punt for the first time in 10 quarters when he entered the game against Missouri in the third. He might have been rusty. His punt went 12 yards. He's punted 16 times and is averaging 34.4 yards.

Florida matched its largest comeback in a road game when it rallied from 18 points down to beat Vanderbilt 37-27. The Gators had lost 26 straight games when trailing by 18 points or more.

The Gators previously trailed by 18-plus points and won when it beat Kentucky after trailing 21-3 in the fourth quarter in 2003.

Rutgers quarterbacks ended a 34-7 loss at Maryland with a combined two completions and five interceptions, one of the worst passing performances on record. Freshman Arthur Sitkowski was 2 for 16 for 8 yards and four picks. Fifth-year senior Gio Rescigno threw an interception on his only attempt.