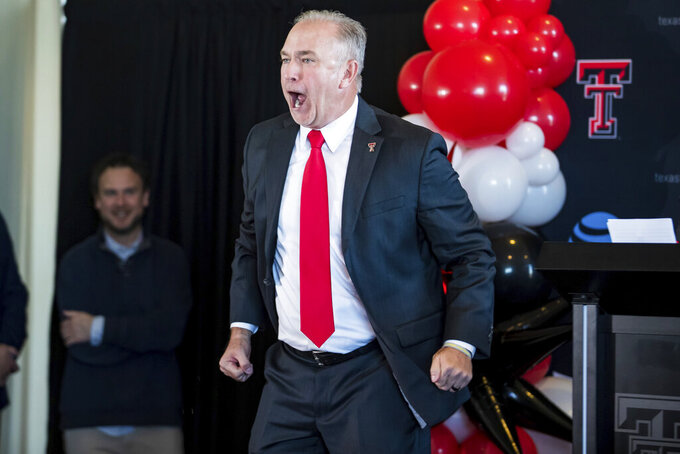 Joey McGuire got more than 1,500 texts after being named head coach at Texas Tech.

Most of those congratulatory messages were from high school coaches in the Lone Star State, an early indication that athletic director Kirby Hocutt found what he was looking for in a new coach.

“Kirby said that he wanted to connect the high school coaches. That is my DNA,” McGuire said Tuesday. “I’m one of them and I’m very proud of that. I’m a high school coach that coaches college football. It’s not the other way around. That’s where my roots are.”

Before the past five years on Baylor’s staff, McGuire won three state championships while turning Cedar Hill High into a Texas powerhouse. The school had never won a playoff game before 12 consecutive playoff appearances in his 14 seasons as head coach after six as an assistant there.

Though McGuire won't take over the head coaching duties for the Red Raiders until after this season, he was formally introduced on the Lubbock campus. He immediately joined the school's athletic department to begin the transition.

Sonny Cumbie, the former Red Raiders quarterback and their first-year offensive coordinator, will continue in the interim head coach role he took when third-year coach Matt Wells was fired two weeks ago. The Red Raiders (5-4, 2-4 Big 12) have home games against Iowa State and No. 10 Oklahoma State before ending the regular season at No. 18 Baylor.

Hocutt said search committee members wanted someone who passionately wanted to be at Texas Tech and shared the belief that the Red Raiders could be at the top of the Big 12 Conference; a coach who could build relationships with players in the locker room; and someone who could attract the best high school talent in the state.

After taking the podium in a stadium club area, McGuire stepped away from the microphone and shouted “Raider!” to get the customary “Power!” response from the packed room full of boosters that included Mark Adams only a few hours before his debut as Tech's head basketball coach.

McGuire then did it a second time before enthusiastically telling them, “Man, I’ve been waiting all my life to do that.”

The 51-year-old McGuire, a member of the Texas High School Coaches Association Hall of Honor, described himself as a unicorn in coaching.

“I have now been four places. I was Crowley (High) for three years. I was Cedar Hill for 20 and Baylor five, and I will die here at Texas Tech,” he said. “I really believe that, you know, you get somewhere and you make it the best.”

Within hours after McGuire's hiring was announced Monday, three standout defensive players from Cedar Hill verbally committed to sign with the Red Raiders.

McGuire went to Baylor as part of coach Matt Rhule's staff that took the Bears from a one-win season to the Big 12 title game two years later in 2019. When Rhule left to become coach of the NFL's Carolina Panthers, McGuire remained as Baylor's associate head coach under Dave Aranda.

“High school coach is in my DNA, and he’s a guy that convinced me to come to Baylor,” McGuire said of Rhule. “Man, what a great five years. He is one of my best friends."

McGuire's daughter is a Texas Tech graduate, and the coach shared the story of moving her into a dormitory before her freshman year. While mom and daughter, who were with him Tuesday, decorated the room that day, father and son went to watch football practice and visited with then-coach Kliff Kingsbury.

“I’ll never forget my son comes out and he’s fixing to be a freshman in high school and he introduced himself ... He said, ‘Hey Kliff, my name’s Garret McGuire, and they call me the Kliff Kingsbury of my generation.' That's how it all started," McGuire said.

The younger McGuire wasn't able to attend the campus introduction. He is now a young coaching assistant for Rhule and the Panthers, who are preparing to play the Kingsbury-coached Arizona Cardinals this Sunday.