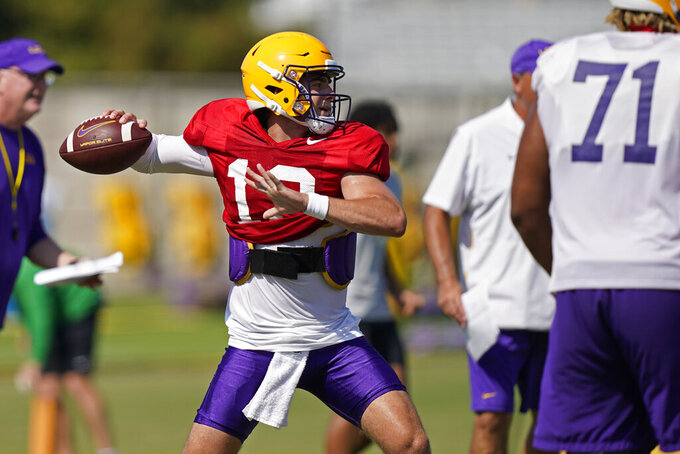 The last time LSU entered a season outside the AP Top 25 was the late summer of 2000 — when the Tigers had a new coach named Nick Saban.

LSU wound up going 8-4 that season, a sharp improvement from 3-8 in 1999. By the end of the 2003 season, The Tigers were celebrating the second national championship in program history.

But just two seasons after overseeing arguably the greatest season in LSU's 128-year history, Orgeron, a Louisiana native of Cajun heritage, was forced out. LSU went 5-5 in 2020 in 6-7 in 2021.

LSU athletic director Scott Woodward sought to rectify the Tigers' downturn by luring Kelly away from Notre Dame — where he'd coached for 12 seasons — with a contract worth nearly $100 million.

“Since he got here, things have been great," receiver Kayshon Boutte said. "I feel like we’re in a good environment under a great head coach.”

Kelly overhauled the football staff, including in the strength and conditioning department. He retained only one of Orgeron's assistants: offensive line coach Brad Davis. Kelly then rebuilt the roster with a combination of transfers and recruits.

Numerous starting jobs remained unknown just one month before the season opener against Florida State on Sept. 4. The position groups that Kelly conceded has the most uncertainty were crucial ones: quarterback, offensive line and cornerback.

But for now, veteran players who've taken on leadership roles, such as defensive end BJ Ojulari, sound bullish on the Tigers' chances of rebounding quickly under Kelly.

“I always had a great perception of him. He’s a winning coach and he has a plan and he has been executing that plan starting from when he first got here," Ojulari asserted. "Every time we get on the field, we’re ready to go.”

As of mid-August, two players were in contention to start at quarterback: redshirt freshman Garrett Nussmeier and Arizona State transfer Jayden Daniels.

Myles Brennan, a 23-year-old sixth-year player, had opened camp in the mix, but apparently slipped down the depth chart before he decided Monday to step away from football.

Nussmeier had some promising action last season but skipped the bowl game so he could retain a year of eligibility. Daniels was a starter at ASU and has demonstrated the foot speed and agility to be effective as a scrambler. Even if he doesn't beat out Nussmeier, there is bound to be a package of plays for him throughout the regular season.

“You have a very competitive situation still going on,” Kelly said.

The defensive line looks to be one of the strongest position groups at LSU. Ali Gaye, Maason Smith, Jaquelin Roy and Ojulari return from last season. Freshman Quency Wiggins also could emerge as a contributor if he lives up to the potential that made him a coveted recruit.

"We should be the most dominant front four in the NCAA this year,” Ojulari said.

The offensive line, by contrast, lost three players to the NFL. Cameron Wire, who started four games last season, has the most experience. And the unit has a new center in Garrett Dellinger, who had previously played guard or tackle and is now learning a new position.

“Becoming a center overnight is not the ideal for anyone, especially in the SEC West,” Kelly said. “He’s a guy that has a high football IQ, he’s physically gifted and he’s got a strong mindset in that he wants to go in and do it.”

Boutte has been named to the 2022 watch list for Biletnikoff Award given to the top player at that position nationally.

Last season he had nine touchdowns and more than 500 yards receiving before a season-ending ankle injury in his sixth game.

“I feel like the Biletnikoff is one of my goals," Boutte said. "I feel like if I didn’t have my injury last year, I was on pace to win it.”