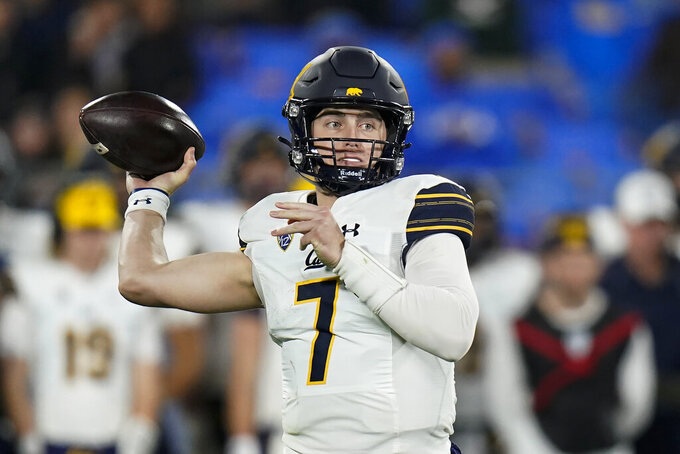 BERKELEY, Calif. (AP) — USC will play its final game of the season Saturday in Berkeley, but the Trojans won’t have Lincoln Riley calling plays from the sidelines.

Riley, who was hired this week after five years at Oklahoma, is trying to settle in and set up shop in Los Angeles and won’t officially take over until the offseason.

That leaves interim coach Donte Williams to run things for USC in its Pac-12 finale against California. Neither the Trojans (4-7, 3-5) nor the Golden Bears (4-7, 3-5) are bowl eligible, meaning their seasons are over after this weekend.

The Trojans are coming off a 35-31 loss to No. 12 BYU after consecutive blowout defeats against UCLA and Arizona State.

The three-game skid is USC’s longest since ending 2018 with three straight losses, one of them to California.

The dark cloud that has loomed over the Trojans this year was lifted somewhat with the hiring of Riley, who is being counted on to help get USC back to national prominence. The new coach met with some of his Trojans players this week but will be a bystander Saturday while Williams calls the shots at Memorial Stadium.

“(Williams) put a lot of belief in our guys and we had a lot of confidence in him,” said quarterback Jaxson Dart, who is expected to make his second start in place of injured Kedon Slovis. “He did a great job of setting the culture and holding everybody accountable.”

The game between USC and California was originally slated for Nov. 13 but was postponed due to COVID-19 concerns within the Bears program.

Once Cal was cleared to play again, the Bears thumped Stanford before seeing their postseason hopes end in a lopsided loss to UCLA.

“It’s disappointing to not have the chance to play for a bowl game, there’s no doubt about that,” Cal coach Justin Wilcox said. “That’s something we would all expect from our program but we are where we are. We have to go out and celebrate this team by preparing really well and playing our best football.”

The Trojans lead the all-time series 70-31-5 and have won 15 of the last 16 games between the two teams. Cal hasn’t defeated USC in Berkeley since a triple-overtime win in 2003.

Slovis did some light work in practice Tuesday while mending from a calf injury but it’s almost certain Dart will start at quarterback. The Trojans freshman has passed for 1,162 yards and eight touchdowns with five interceptions while completing more than 61% of his throws.

Several seniors on both teams have another year of eligibility remaining due to the pandemic-shortened 2020 season, though not everyone is expected to use it. Among those still debating whether to come back for Cal are quarterback Chase Garbers, wide receiver Nikko Remigio and linebacker Kuony Deng. “I haven’t thought about it too much,” said Garbers, who leads the Pac-12 in total offense. “I’m open to returning to college football or leaving. We’ll just see what happens after this season and the next couple of weeks.”