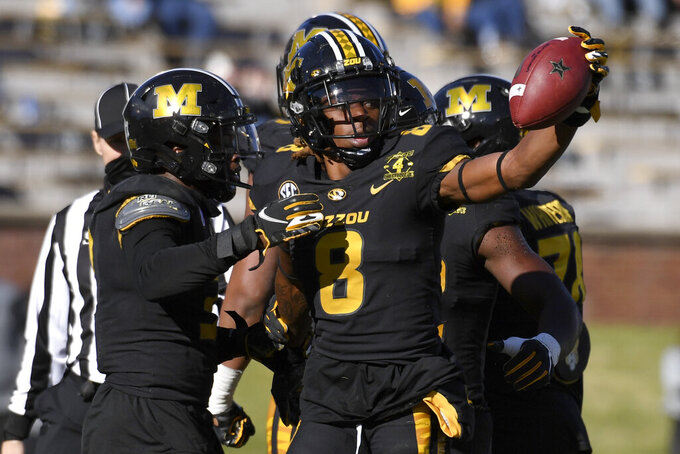 Missouri defensive back Jarvis Ware (8) celebrates after recovering a fumble during the second half of an NCAA college football game against Vanderbilt Saturday, Nov. 28, 2020, in Columbia, Mo. (AP Photo/L.G. Patterson)

COLUMBIA, Mo. (AP) — Sarah Fuller made history, but her barrier-breaking kickoff was the only highlight for Vanderbilt as Missouri dominated the Commodores 41-0 on Saturday.

Fuller became the first woman to participate in a Power 5 conference football game when she kicked off to start the second half. Fuller delivered a low kick that bounced to the 35-yard line, where Missouri pounced on it. She never got the chance to attempt a PAT or field goal, as the Tigers (4-3) rarely allowed the Commodores (0-8) to cross midfield.

“I just think it’s incredible I am able to do this, and all I want to do is be a good influence to the young girls out there,” Fuller said.

Missouri’s defense made sure Fuller didn’t get any chances to score. Missouri outgained Vanderbilt 603-196. Larry Rountree rushed 21 times for 160 yards and three touchdowns.

“He refuses to get tackled,” Missouri coach Eli Drinkwitz said of Rountree. “The play is never over until you physically get him to the ground.”

Connor Bazelak completed 30 of 37 passes for 318 yards. Running back Tyler Badie had seven catches for 102 yards and scored on a 1-yard run in the second quarter. True freshman quarterback Brady Cook got his first snaps of the year in mop-up time and threw a 25-yard touchdown pass to Damon Hazelton.

Missouri has held three of its last four opponents to 10 points or less. Vanderbilt quarterback Ken Seals completed 11 of 19 passes for 79 yards. Keyon Henry-Brooks rushed 15 times for 64 yards but lost a fumble in Missouri territory to end a rare promising drive for the Commodores to open the third quarter.

“I take full responsibility for where we were today,” Vanderbilt coach Derek Mason said. “I thought we prepared the right way. Just in terms of energy and momentum and just being able to be sustainable, we just didn’t have it. We didn’t have it today.”

Fuller, a senior goalkeeper on the Vanderbilt soccer team, joined the football team this week after helping the Commodores win the Southeastern Conference Tournament last weekend. COVID-19 protocols and restrictions left Mason with a limited number of specialists available against Missouri. Mason reached out to soccer coach Darren Ambrose for some help, and Fuller agreed to give the sport a try.

Fuller said afterward that she was more nervous for her last soccer game than her first football game. She wasn’t shy around her new teammates, even speaking up at halftime and telling them to be more enthusiastic. Fuller said she hopes to play again next week.

Mason said the coaches asked Fuller to squib the kickoff because she was used to delivering low kicks on the soccer field. After the play, she went straight to the sideline where she high-fived some of her new teammates and swapped some elbow bumps. Fuller’s parents watched and cheered from the stands along with her boyfriend and best friend.

Missouri: Senior linebacker Nick Bolton is making a bid for All-SEC and All-American honors. Bolton finished with nine tackles, a sack, two tackles for loss and a pass breakup against Vanderbilt. He has 76 tackles on the season.

Vanderbilt: The Commodores don’t have a great football tradition, but they’ve never gone winless in a season. They’re running out of chances this year, with only Georgia and Tennessee left on the schedule.

Missouri: The Tigers are scheduled to play Arkansas at home on Saturday.