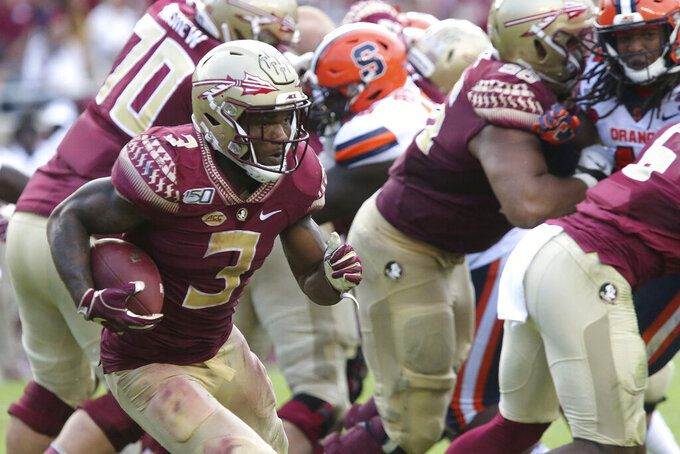 TALLAHASSEE, Fla. (AP) — Florida State coach Willie Taggart was asked if he wanted to announce his starting quarterback for this week's game against Miami.

After weeks of analyzing the merits of James Blackman and Alex Hornibrook, a smiling Taggart quipped: "Yeah, Cam Akers."

The versatile Florida State tailback has lined up at quarterback in the Wildcat formation — though WildCam has sort of stuck with fans. Taggart refers to Taggart as "QB3." Akers is the Seminoles' most dangerous offensive weapon and the Florida State coaching staff seems to be just scratching the surface of how to use the former high school quarterback.

Maybe they'll open the playbook even more against Miami on Saturday.

Akers already has a 1,000-yard rushing season and is closing in on another, in collaboration with Hornibrook or Blackman.

"We'll keep expanding that," Florida State offensive coordinator Kendal Briles said of Akers' role. "He throws the ball extremely well, and we've seen it since I got here in January. He's accurate with the football and he makes good decisions. He's played the position and that's why you trust him being back there. It definitely adds a different dynamic."

Akers' face lights up when asked about the Wildcat, in which he lines up behind center in the shotgun. Coaches had used it a few times this season before showcasing it in Saturday's 35-17 win against Syracuse.

The possibilities include Akers being a rusher, keeping it or pitching to tailback Khalan Laborn. Akers is also a capable passer, having thrown for 8,140 yards and 78 touchdowns in four years as a high school quarterback.

While Florida State-Miami is a matchup of 4-4 teams that have often been underwhelming, Akers' capabilities and the new Wildcat wrinkle add some spice to the rivalry game. The formation creates several option for the Seminoles.

"You can do anything," Akers said. "It was exciting to come out and be able to go make some plays in a different way."

Akers has been quite effective at his normal position — running back. He ran for 1,025 yards as a freshman in 2017, setting high expectations for what he would do as Taggart took over at Florida State the following year. But an ankle injury as well as frequent shake-ups due to injury and inconsistency on the offensive line held Akers to just 706 rushing yards and six touchdowns.

Healthy again this fall and running behind a revamped line, Akers has 917 rushing yards and 12 touchdowns as well as 21 receptions for 151 yards and three touchdowns. Akers is just 83 rushing yards from multiple 1,000-yard seasons, a feat that only Warrick Dunn (1994-96) and Dalvin Cook (2015-16) have accomplished in Florida State history.

The Seminoles' ground game may not look like much statistically, ranking just 94th in the FBS as they average 139.9 yards per game. But Akers has put together five 100-yard rushing games this season and will be a challenge for a Miami rush defense that ranks 17th in the FBS, allowing just 106.1 rushing yards per game.

"He's running extraordinarily physically," Miami coach Manny Diaz said. "He's breaking through tackles, always falling forward. I think that's the biggest thing I see right now, will and determination as a runner. He gets low to the ground, he's got a very low center of gravity and it's just churning forward after contact.

"It's no secret that he's their best player. He'd be almost everybody's best player in the entire country."

Akers, of course, goes under the radar on one of the ACC's mid-level teams. But it's also quite clear based on his performance that Akers is an irreplaceable centerpiece of Florida State's offense.

"A lot of times, you don't want to make things difficult," Briles said. "So if you make it even easier by snapping it to him, you know that he's getting it. We'll continue to feed him, he's a really good football player, a humble kid and he's playing at a high level."