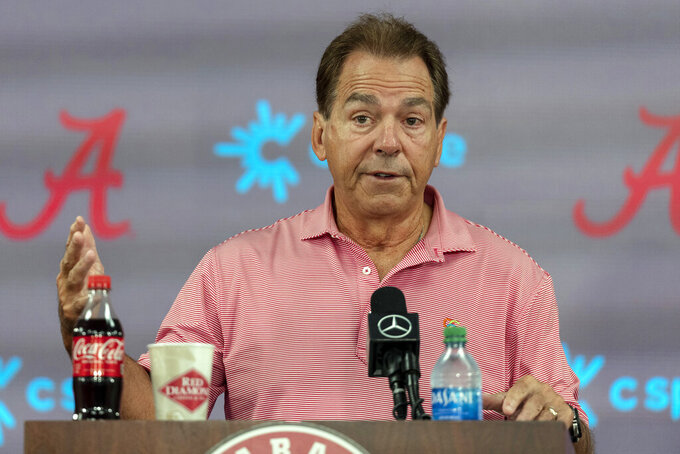 FILE - Alabama head coach Nick Saban speaks with the media during NCAA college football media day on Aug. 7, 2022, in Tuscaloosa, Ala. It's championship or bust for Nick Saban and Alabama, with no pretensions otherwise. (AP Photo/Vasha Hunt, File)

Line: Alabama by 42 1/2, according to FanDuel Sportsbook.

Alabama coach Nick Saban hates this line of thinking, but this game very much amounts to a tuneup before visiting Texas. It's a chance for the Crimson Tide to get key transfers some game action in the system. That includes wide receiver Jermaine Burton, tailback Jahmyr Gibbs and left tackle Tyler Steen. Cornerback Eli Ricks is also vying for a starting spot. The Aggies have won eight straight games away from home, the nation's longest active streak.

Blockers versus pass rushers. Alabama has the nation's top sack leader from 2021 in linebacker Will Anderson Jr., along with Dallas Turner among other pass rushers. Utah State had 11 tackles for loss against UConn last week and finished tied for second-most nationally last season with 114.

Utah St: RB Calvin Tyler Jr. was a workhorse in the win over UConn, running 33 times for 161 yards. Both were career highs for the graduate senior.

Alabama: QB Bryce Young is seeking to become only the second repeat Heisman Trophy winner. This game is more about getting in sync with those new playmakers, including a largely new or inexperienced group of receivers.

Alabama is ranked for the 230th consecutive week, the longest active streak in college football. ... Utah State won both of its games against Power 5 opponents last season, beating Washington State 26-23 and then topping Oregon State 24-13 in the Jimmy Kimmel LA Bowl. ... Alabama is riding a 20-game winning streak in the home opener, including a 15-0 record under Saban. The average margin in such games during Saban's tenure is 30 points. ... It's only the third time Utah State has faced the No. 1 team, and first since 1984. The Aggies are 0-2. ... Utah State receiver Xavier Williams spent four seasons at Alabama, catching three passes for 24 yards and appearing in 12 games.