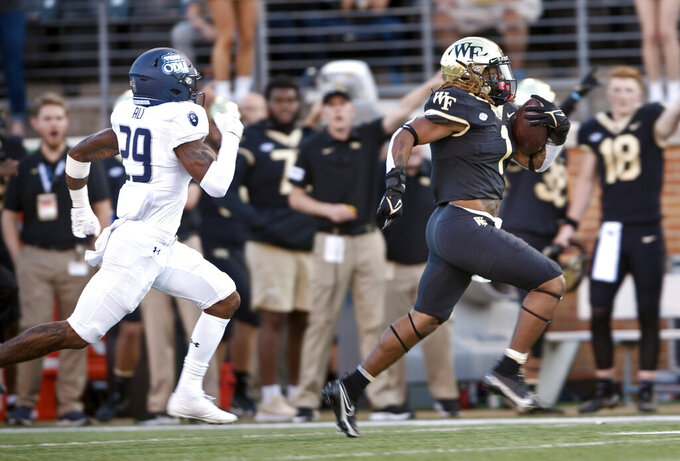 It marked the Monarchs' return to the field after not playing last year amid the COVID-19 pandemic.

Beal-Smith ran untouched around the left end and sprinted down the sideline for a 48-yard touchdown in the first quarter to get the Demon Deacons on the board. Then, after the Monarchs managed a field goal, Taylor came through with his huge return that squashed any fleeting momentum for ODU.

The cornerback broke through an arm-tackle attempt and stayed on his feet through a stumble around the 20-yard line, then kicked into gear and down the sideline for the 99-yard score and a 14-3 lead.

“Once I caught it, I broke a couple of tackles,” Taylor said. "And after the last stiffarm, I just saw green grass and a bunch of my guys leading the way.

It marked only the second kickoff return for a touchdown for Wake Forest since 2008 — and it came from a fifth-year senior with only two punt returns on his resume in the return game.

Taylor — who also had an interception — had assumed the role after a season-ending injury to receiver Donavon Greene. Taylor ran right to Greene to give him a hug behind the end zone after the score, too.

“He's a guy that has ball skills and we trust, and thought if we had a seam, that he could hit it," Wake Forest coach Dave Clawson said. "And obviously that happened tonight.”

Sam Hartman also threw for three scores for Wake Forest, with one of those going to Jaquarii Roberson for his fifth consecutive game with a TD.

Old Dominion was playing its first game since Nov. 30, 2019 and its first game under head coach Ricky Rahne. Rahne, who had previously been Penn State's offensive coordinator, took over the program nine days after the Monarchs' last game.

But the Conference USA program canceled all fall sports last season due to the pandemic, delaying Rahne's debut — which was scheduled to be at home against Wake Forest last year — for more than 640 days.

The Monarchs didn't get to the end zone until late, with Hayden Wolff lofting a 9-yard toss to Isaiah Spencer with 2:27 left.

“My team, as good as I think they are ... we just didn't play as well as we could today,” Rahne said. "And we're going to play better."

ODU: The Monarchs had some good moments on the ground behind Elijah Davis (69 yards) and Blake Watson (55). But ODU got nothing in the passing game from UCF graduate transfer D.J. Mack, who emerged from a three-way battle to start at quarterback. Mack completed 7 of 21 passes for just 39 yards with two interceptions. Wolff threw for 88 yards on 11-for-17 passing in mop-up duty.

Wake Forest: The Demon Deacons had a stress-free start to their push for a sixth straight bowl game, this one with fans back in the stadium after having limited-capacity crowds last season amid the pandemic. Wake Forest had offensive balance (184 yards passing, 164 rushing), though the Demon Deacons ended the first half with Beal-Smith being stuffed on a fourth-down wildcat leap for the end zone at the goal line.

Wake Forest receiver A.T. Perry experienced some first-game jitters with fans back in the stadium after having limited-capacity crowds last year amid the pandemic.

He knew one way to handle it Friday: call Mom.

“I was really anxious, I was really nervous,” Perry said. “But as soon as I stepped on the field and I had seen al the fans, I was like, ‘It’s time.'"

Whatever she said worked. He finished with four catches for 81 yards and a touchdown.

ODU: The Monarchs have their home opener against Hampton on Sept. 11.