Big Ten wastes no time getting down to business with openers 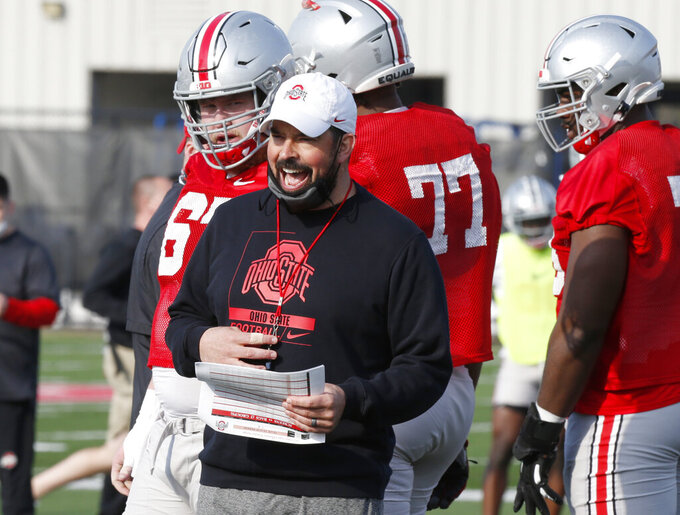 FILE - Ohio State coach Ryan Day yells during an NCAA college football practice in Columbus, Ohio, in this Monday, April 5, 2021, file photo. There will be no easing into the season for most Big Ten teams. Ohio State coach Ryan Day was non-committal when asked if he liked playing a conference opener. “I’ll tell you after Thursday night’s game,” he said. (AP Photo/Paul Vernon, File)

There will be no easing into the season for most Big Ten teams.

Four conference games -- and good ones, too -- are on the schedule in Week 1. A fifth was played in Week Zero.

The usual games against Group of Five or FCS opponents will come just a bit later for 10 of the 14 teams. The Big Ten this week is capitalizing on a holiday weekend with no NFL games, providing strong television inventory and ramping up excitement for the fans.

“What a way to open up this season,” said Wisconsin coach Paul Chryst, whose 12th-ranked team hosts No. 19 Penn State on Saturday. "For us, it’s a little bit different from maybe Penn State in the sense that it’s a home game, but you talk about going through last season with no fans in the stands, and now you say our home opener is against Penn State and fans are in the stands. It’s a heck of a way to start.”

The Big Ten was one of the leagues that played a conference-only schedule during the pandemic-shortened 2020 season. Traditionally, conference play doesn't begin in earnest until late September.

This week's season/Big Ten openers have No. 4 Ohio State at Minnesota on Thursday, Michigan State at Northwestern on Friday and No. 17 Indiana at No. 18 Iowa in addition to Penn State-Wisconsin on Saturday. Illinois beat Nebraska 30-22 last week.

It was not unusual for Big Ten teams to open against conference opponents into the 1980s.

Purdue visited Northwestern to open 2018 and Ohio State played at Indiana to start 2017. Before that, there hadn't been a conference game for an opener since 1996.

Ohio State coach Ryan Day was noncommittal when asked if he liked playing a conference opener.

“I’ll tell you after Thursday night’s game,” he said. “If you win the game, then you got one in your pocket. Obviously, if you don’t, then you’ve got a lot of work to do.”

With such a meaningful game right out of the gate, Day said, it will be important for his experienced players to be strong leaders.

“That’s something that we really need going into this game,” he said. “Guys like Chris Olave, Zach Harrison, Haskell Garrett, Josh Proctor. When you look up to a guy who’s been in the spot before and been in big games and played night games and conference games, there’s a little bit of confidence that can come off of those guys.”

Minnesota running back Mohamed Ibrahim said he and his teammates are juiced up facing a Buckeyes team that has won four straight Big Ten titles and played in the national championship game in January.

“We know what we’re getting ourselves into,” Ibrahim said. "Those guys represent the whole Big Ten very well. They go to the playoffs every year, so those guys will be prepared. It just gives us a little boost knowing that we’ve got to be on our ‘A’ game Thursday night.”

Wisconsin linebacker Jack Sanborn said there's a higher level of excitement and energy around the football facilities because of the magnitude of the first game.

“I’m ready for the challenge,” he said. "This team will be ready for it. It brings more hype, more excitement for the game.”

“I wouldn’t say it adds a sense of urgency,” he said, "but you’re going to be thrown in the thick of things right away.”