Georgia Tech looks for changes in Year 3 of Collins era 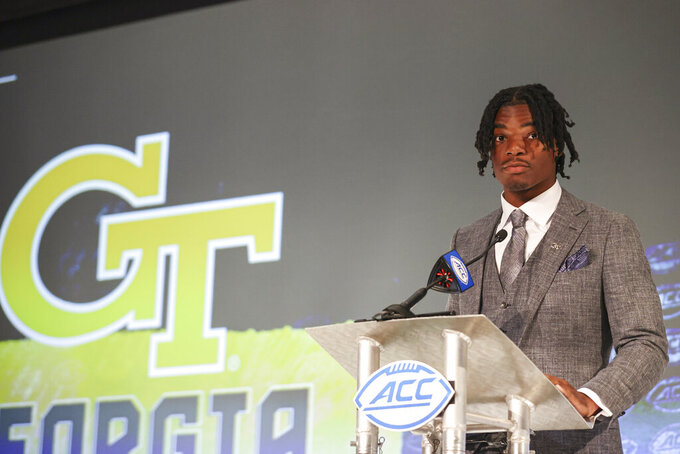 ATLANTA (AP) — With season three upcoming for the coach Geoff Collins era at Georgia Tech, words and phrases like “re-building” and “re-shaping” may no longer be pliable.

The Yellow Jackets have been dreadful in the first two seasons after option offense afficiando Paul Johnson retired. Georgia Tech has gone 3-9 and 3-7 in its first two tries with Collins as head coach. It being 2021, Collins and Georgia Tech fans are looking for things to start turning around.

As with so many teams, youth should no longer be an issue with the NCAA granting an extra year of eligibility to every player who played or opted out last season for COVID-19 reasons if they choose to keep playing. Yes, Tech has 25 true freshman scholarship players. They also have seven “really redshirt seniors” taking a sixth season of on-field eligibility and 12 players who are new via transfer from other schools, several with college degrees.

But with all the the turnover and holdovers brings with it good news-bad news.

The Good: Tech’s best players –- quarterback Jeff Sims and running back Jamhyr Gibbs — are back after solid, borderline spectacular-at-times-in-injury-speckled freshman seasons, plus several players are new to the program with starting experience at other big programs.

The Bad: Tech returns several players from a team that was among the nation’s most penalized and field goal fruitless (3-for-8) last season, and sub-standard in almost all categories that exist.

But they seem happy.

“I thought when I came that I was going to get one opportunity to play here, and I got through with that season and I realized that I love this place so much that I wanted to stay,” said offensive lineman Ryan Johnson, who figures to start again after transferring from Tennessee before last season.

Paul Johnson caught flak for being run oriented, but Tech is so talented among people who run the football that when compared to passing it, running may be the better option rather than throw and throw.

Sims won three ACC Player-of-the-Week awards last season, more for rushing for 492 yards and six touchdowns than for modest passing statistics. Plus, there is running back Jahmyr Gibbs, who was All-ACC honorable mention despite missing 3.5 games because of injury and several-time junior Jordan Mason, who missed nearly half the season with injury. He was All-ACC as a first-time freshman. He missed 3.5 games last season due to injury. There’s a guy named Jamious Griffin, too, who merits attention.

Saying Georgia Tech struggled last season getting out of its own way is a major understatement. The Yellow Jackets' 8.9 penalties per game ranked 121st in the country was nearly the worst in the country -- and they’re no longer a high-volume number of plays offense. It was much worse on the road – 11.8. Their penalties-per-snap was also among the highest, and 41 of 89 penalties were before the ball was snapped, like false starts, etc. “The culture is set," Collins said. "Now is the time to focus in on all the details that will take us to the next step in the development of our program.”

Georgia Tech looks good at safety, where Tariq Carpenter and Juanyeh Thomas roam; they're NFL-caliber good. The rest of the secondary is fluid, as cornerbacks Tre Swilling, Zamari Walton, Kenyatta Walker and even Myles Sims, a Michigan transfer from a couple years ago. Look for nickelback Wesley Walker to contribute.

Georgia Tech will be much bigger along the offensive and defensive lines than in recent years. Left tackle candidate Devin Cochran, a Vanderbilt graduate transfer, was 317 pounds at last measure, not to mention is 6-foot-7. Looks like Georgia Tech will average well over 300 pounds along the offensive line. It’s been a long time since that happened. The defensive line is bigger, too, with Old Dominion transfer DE Keion White looking to make a difference.

Georgia Tech made three of eight field goal tries last season. That was one of the least productive ratios in the history of modern college football. The Yellow Jackets hope that Brent Chimagha, a graduate transfer from Tennessee, can improve upon that. There is also a search to replace punter Percy Harvin, who was drafted by the Pittsburgh Steelers in the 7th round. The Yellow Jackets know Gibbs is adept as a return man.

Georgia Tech's schedule is challenging. The Jackets have games against Clemson, North Carolina, Miami, Notre Dame and Georgia. Those teams are all ranked in the Top 25, and Georgia Tech is widely considered to have one of the toughest schedules in the country.