Key players gone, but Cincy's Fickell says 'run is not over' 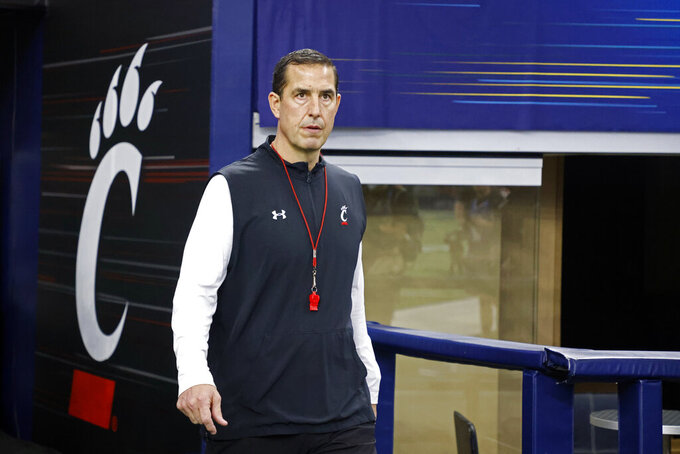 FILE - Cincinnati coach Luke Fickell walks onto the field before the Cotton Bowl NCAA College Football Playoff semifinal game against Alabama, Friday, Dec. 31, 2021, in Arlington, Texas. Fickell has received a two-year contract extension through 2028 and a raise to $5 million per year after leading the Bearcats to the College Football Playoff. The university board of trustees approved the contract extension Tuesday, Feb. 22, 2022, also increasing the football staff salary pool to $5.2 million per year. (AP Photo/Michael Ainsworth, File)

While finding a replacement for the record-setting four-year starter at quarterback may be at the front of the coach's mind this spring, the title of that tome should probably be amended to also lament the loss of a stud running back, a pair of All-American defensive backs and all seven captains from last year's College Football Playoff team.

The stars aligned for “Coach Fick” last year as the star-studded Bearcats produced the best season in school history and cracked the CFP, the first team from a second-tier conference to do so. They didn't lose a game until they ran into Alabama in the national semifinal.

Now, with a contract extension worth $5 million a year through 2028 and Cincinnati's move to the Big 12 in the next couple of years, Fickell has to show he can sustain national success.

Fickell is entering his sixth season as Bearcats coach. He said spring practice this time is as critical as any during his tenure.

“The expectation doesn’t change, the train continues to move forward. It’s not slowing down, it’s not stopping," he said. "The run is not over.”

Speaking of quarterbacks, the likely replacement for Ridder seems to be sophomore Evan Prater, a former Ohio Mr. Football and one of Cincinnati's highest-rated prep recruits ever. Prater played in seven games backing up Ridder last season.

Then comes Ben Bryant, who spent three seasons at UC backing up Ridder, transferred and started for Eastern Michigan last year and now is back at Cincinnati as a grad student to compete for the starting job. Bryant led Eastern Michigan to a 7-6 record and a bowl game last season while throwing for 3,121 yards, 14 touchdowns and seven interceptions.

“It’s going to be a battle,” Fickell said.

“We've got to put them in positions and situations where they can do what it is that they do well, then that’s where we’ll have to adapt and adjust,” he said.

Alabama transfer Jerome Ford emerged as the No. 1 running back for the Bearcats last season, rushing for 1,242 yards and 19 touchdowns while averaging 6.2 yards per carry.

Ryan Montgomery, Charles McClelland, Ethan Wright and Myles Montgomery will compete to be the next No. 1.

The Bearcats have four new assistants on staff, and besides new offensive coordinator Gino Guidugli, the one shouldering the biggest responsibility might be Kerry Coombs, hired to coach cornerbacks and coordinate special teams.

The 60-year-old Coombs was demoted and then fired as defensive coordinator at Ohio State after a dismal season for that unit. Now at Cincinnati, he's got to identify and motivate replacements for Coby Bryant and Sauce Gardner — the best cornerback tandem in college football last season.

At least Coombs didn't walk into totally strange territory. He coached at Colerain High School in Cincinnati, then spent two years on the UC staff before being hired by Urban Meyer at Ohio State. He and Fickell were colleagues on Meyer's staff.

“A lot of things look the same,” said Coombs, known for his energy and ability to connect with players. "There are facility upgrades, don’t get me wrong, but the tone and tenor that Luke has brought is special. It’s exciting to be a part of that. You feel that. So, it’s very similar and very different all at the same time.”

Spring practice continues until April 14, with the annual spring game set for April 9.